LONDON — A year ago this week, a brusque, defiant figure in shirt sleeves appeared in the sun-dappled garden behind 10 Downing Street to give one of the most extraordinary news conferences in recent British political history.

On Wednesday, that same man — Dominic Cummings, then the most powerful adviser to Prime Minister Boris Johnson; now arguably his most dangerous enemy — will testify before two Parliamentary committees on Britain’s handling of the coronavirus pandemic. It is being billed as a can’t-miss sequel in the Cummings Chronicles.

Mr. Cummings is expected to unload a trove of inside details about how Mr. Johnson bungled Britain’s initial response, necessitating what he claims were months of needless and ruinous lockdowns. His account, some of which he previewed in a dense, didactic Twitter thread over recent days, is likely to embarrass a leader who bounced back from that wobbly performance, largely on the strength of Britain’s swift rollout of vaccines.

“Dominic Cummings has long been known as a man who brings a bazooka to a knife fight,” said Matthew Goodwin, a professor of politics at the University of Kent. “I suspect he shall not walk quietly into the night.”

But Mr. Johnson later fell out with Mr. Cummings, firing him in November. Last month, the aide turned publicly on his ex-boss, accusing him of unethical behavior in the costly decoration of his flat in Downing Street and of trying to shut down a leak investigation because he feared it would antagonize his fiancée, Carrie Symonds.

With its promise of further juicy details about an alliance gone bad, the testimony is likely to be political theater of a rare vintage. The Sunday Times has speculated that Mr. Cummings will say Mr. Johnson missed numerous early coronavirus meetings because he was busy working on his long-delayed book about Shakespeare. 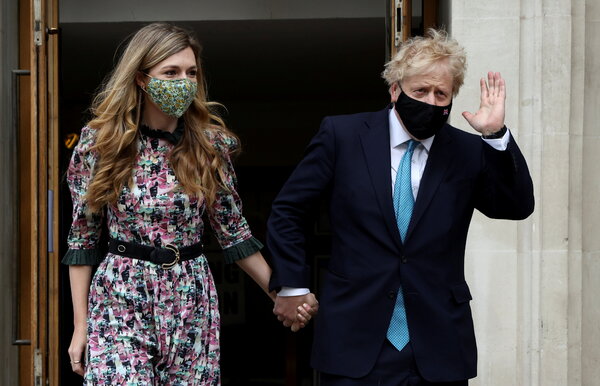 Public health experts say Mr. Cummings could shed light on government decisions that are still poorly understood, whether because they have been cloaked in secrecy, distorted by after-the-fact spin or simply misrepresented. That, they said, would amount to a valuable step in learning lessons from the pandemic.

As Mr. Johnson’s most influential aide, Mr. Cummings sat in on meetings of the government’s scientific advisory group, known as SAGE, where epidemiologists and behavioral scientists debated the right response to the pandemic. He immersed himself in modeling data and formed strong opinions about the need for quick lockdowns, which he says was brushed aside by a government that initially decided to allow the virus to rip through the population until Britain reached “herd immunity.”

Mr. Johnson’s aides have long denied that was their goal, but Mr. Cummings said in a Twitter post that herd immunity was “*literally the official plan in all docs/graphs/meetings* until it was ditched” after new data showed that hospitals would collapse, and more than 250,000 people could die, if nothing were done to curb the spread. Even then, Mr. Johnson waited until March 23 to impose a lockdown.

“Why did SAGE fail so badly at the start?” said Devi Sridhar, head of the global public health program at the University of Edinburgh. “Who was responsible for those decisions? I am very curious if he is going to point fingers.”

“If Cummings is able to put aside the political and personal side and focus on the planning side,” she said, “we could avoid making the same mistakes in the future.”

So far, Mr. Cummings has been circumspect about the role played by the government’s chief medical adviser, Chris Whitty, and the chief scientific adviser, Patrick Vallance. But given how much he knows — and how much he has already disclosed on his blog and Twitter — government officials are worried about the fallout, particularly for Mr. Johnson, who Mr. Cummings said had fallen “so far below the standards of competence and integrity the country deserves.”

Mr. Cummings, 49, played a key role in Mr. Johnson’s ascent, masterminding the Brexit campaign in 2016 and the prime minister’s election victory in 2019. When the virus struck Britain, Mr. Cummings was at the heart of the Downing Street operation.

He said he favored the response of East Asian countries like South Korea and Singapore, which imposed immediate lockdowns, massive test-and-trace operations and bans on foreign travel. Britain dawdled on lockdowns, failed to organize a competent test-and-trace program and only belatedly imposed travel restrictions — all of which contributed to 127,700 deaths, the highest toll in Europe.

“If mass testing had been developed properly earlier in year as cd/shd have been, wd probably have avoided lockdowns 2&3 while awaiting vaccine,” Mr. Cummings said in a Twitter post. In another, he wrote, “One of the most fundamental & unarguable lessons of Feb-March is that secrecy contributed greatly to the catastrophe.”

The problem with Mr. Cummings’s message is the messenger. His decision to flout the rules — most notoriously in going on a family outing to Castle Barnard that he claimed he undertook to test his eyesight — arguably did more to damage the government’s credibility than any single incident during the pandemic.

“He is a tainted source,” said Tim Bale, professor of politics at Queen Mary University in London. “But just because he has an ax to grind and a credibility problem, doesn’t mean he’s not telling the truth.”

For Mr. Johnson, the saving grace may be that Mr. Cummings is testifying at a time when Britain’s vaccination campaign has driven down cases, hospitalizations and deaths. Though there are concerns about flare-ups of a variant first seen in India, the government remains on track to reopen the English economy fully on June 21.

Nor is it clear how much lawmakers will press Mr. Cummings on Mr. Johnson’s personal peccadilloes. On Tuesday, there was a fresh reminder of his checkered history, with the release of a report by the Conservative Party that concluded Mr. Johnson’s disparaging references to Muslims during his days as a newspaper columnist had fostered the impression that the party is “insensitive to Muslim communities.”

For all the static around Mr. Johnson, however, his party just scored impressive victories in regional elections in England.