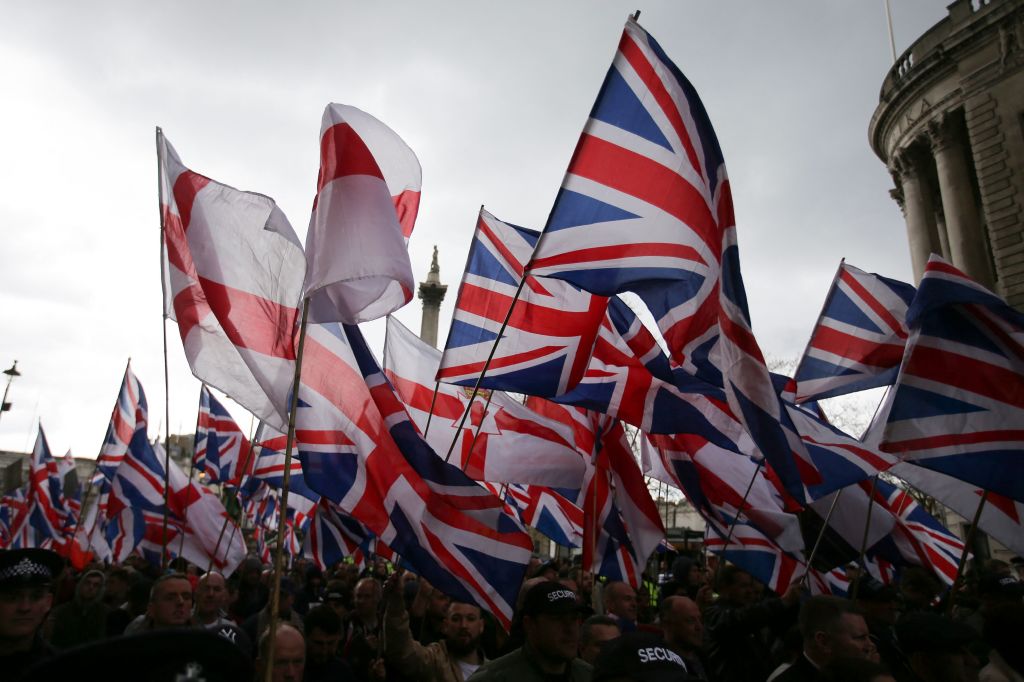 The war in the Ukraine is an existential battle between two political systems.

On one side there is democratic Ukraine, and on the other an increasingly authoritarian and dictatorial Russia.

While the war is being contested in one eastern European country, the significance of the conflict will reverberate across the world.

For Britain’s far-right, it’s been a topic of much interest.

Over recent years, large sections of the far-right have considered Russia as a counterweight to American imperialism and liberalism, viewing Putin’s push back against progressive ideals and his anti-Western rhetoric, including opposition to NATO, as a bulwark against globalisation and (for some), alleged Jewish influence.

Mark Collett, leader of the UK’s largest fascist organisation, Patriotic Alternative, has taken a pro-Russian stance, claiming: ‘NATO’s role in Eastern Europe is to facilitate American imperialism – something which I wholeheartedly oppose.’

Similarly, Stephen Lennon, better known as Tommy Robinson, repeatedly questions the West’s narrative on the invasion of Ukraine and actively pushes Russia’s misinformation. He has repeated Russian claims that the US has bio-weapon plants in the Ukraine and that the Ukrainian army is infested with Nazis.

Lennon’s key sidekick, Daniel Thomas, told his followers on the right-wing social media platform GETTR: ‘Russia is the only country in the world that doesn’t have a centralised bank that is run or connected to the Rothschilds.’

While Britain as a whole is firmly in the democratic camp in this war, new research by HOPE not hate – the UK’s leading antifascism campaign group – shows that our faith in democracy and trust in the political system is at a worrying low, and that support for populism and ‘strongman’ politics is growing.

The desire for this strongman politics and authoritarian rule may well seem contradictory to the sense of voicelessness and misrepresentation that many who consider themselves marginalised from mainstream political debate feel. But it actually plays (even preys) on their feeling of being ‘shut out’ by allowing them to point the finger and lay the blame on elites.

Often charismatic, they build their support as ‘true’ representatives of the people, as those who will really ‘say it how it is’. This was a key tenet of support for Donald Trump.

Staggeringly, more than a quarter of all respondents (26%) – including more than a third of those who voted for the Conservatives in 2019 – voiced support for a system in which a strong leader could make decisions without interference from Parliament or the courts, while 56% were opposed and 17% remained unsure. In other words, a dictatorship.

The fact is that our belief in, and support for, our democratic system is now weaker than many imagine and as someone who strongly believes in democracy, I think this is deeply worrying.

The British Government has rightly stood strong against Putin’s invasion of Ukraine through supplying military equipment, imposing sanctions on oligarchs and closing down Russia’s access to the financial markets. In doing so, the Government has portrayed it as a conflict between democracy and authoritarianism, but more must be done to strengthen the state of our democracy back home.

The British public’s relationship with democracy has been tested over the past few years by a series of political shocks. The ‘Take Back Control’ slogan during the EU referendum campaign was more than just about sovereignty and the UK’s relationship with the European Union. For many, it signified a broader political alignment and a pushback against the status quo.

But HOPE not hate’s report shows that over half of people (57%) are not satisfied with the way democracy is working in the UK, with only 6% saying they were very satisfied, while three quarters (74%) of people do not feel that politicians listen to them. On top of this, a quarter (26%) say the British political system needs to be completely reformed, while over two-fifths (44%) think it needs major changes.

While questioning the actions of political representatives is healthy, feelings of misrepresentation and voicelessness have increasingly found resonance in populist-right narratives. These anti-elite framings of ‘the elite’ against ‘the people’ have further eroded ties between voters and political parties, and increasingly put strain on liberal democracies, fuelling the appeal of ‘strongman’ politics and leaders.

The political landscape has been soured further by the reaction of many to Covid-19. The far-right has increasingly adopted anti-vaccine and anti-lockdown politics in both the UK and abroad and, combined with an increasingly radicalised and hardline conspiracy and anti-lockdown movement, there’s now a much bigger and enthusiastic audience for their message.

There is now a clear overlap between those who believe that the Government has lied about Covid-19 and those questioning the West’s narrative on Ukraine.

While this is not exclusively the work of the far-right, the synergy in their conspiratorial outlook means that the far-right’s extremist message is more easily adopted by the 29% of Britons who our polling has found to think that Covid-19 is ‘a bio-weapon intentionally spread by the Chinese state’, the 20% who believe that ‘elites are encouraging immigration as part of a plot to weaken Europe’ or the 18% of people who believe that Covid-19 has been ‘intentionally released as part of a “depopulation” plan orchestrated by the UN or New World Order’.

While the conspiracy theories themselves might all be individually laughable, they only add to the erosion of trust in the political and democratic institutions a modern democracy needs to exist.

As Russia slips further into aggressive authoritarianism, we need to be honest about the work we need to do here.

The British public’s faith in democracy and our democratic institutions are weaker than many people imagine and repairing this is both vitally necessary for a healthy society, but also the best foil we have against the world Putin and the far-right would want us to have.