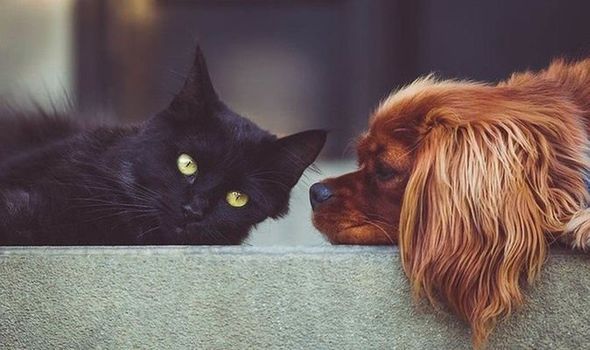 They may look like any other loving pet, but there are some animals out there that have landed themselves a windfall. The four-legged friends of celebrities and the wealthy enjoy a life of leisure with their owners, but some continue living the high life long after their humans are gone.

The richest cat in the world is reportedly a black cat named Blackie who came into millions when his owner left him a fortune in his will.

And did you know that there was a dog so rich he was able to buy Madonna’s mansion?

In some of these cases, the wealth of important people has been left not to their children, partners or other family members, but instead to their pets.

Ranging from cats to chimpanzees, these animals were left with some pretty massive sums after their owners’ deaths.

One of the most notorious pets of his time, Bubbles was the chimpanzee companion of Michael Jackson.

Jackson, who acquired him from a Texas research facility in the 1980s, took Bubbles on a number of foreign tours and even had him drink tea with the Mayor of Osaka.

Long before his death, Jackson arranged for US$2m – about £1.4m – to be left to the chimp.

However, fears that the chimp’s growth and increasing aggression might be a danger to Jackson’s newborn son forced the pre-emptive relocation of Bubbles to an animal sanctuary in 2005.

He lives in the California sanctuary.

When the German countess Karlotta Liebenstein died in 1992, a fortune estimated at around £46m was passed down to her German Shepherd named Gunther III.

The people who took on responsibility for managing the estate eventually turned the canine’s fortune – through investing his inheritance – into a sum exceeding £240m.

When the wealthy dog died, his son, Gunther IV, took on the estate and was involved in a number of property purchases, including being listed as the official buyer on Madonna’s Miami mansion when it was sold in 2000.

Gunther IV is still considered the world’s richest dog to this day.

The chimpanzee pet of Patricia Cavendish O’Neill – the daughter of a British countess and ex-wife of Olympic medallist Frank O’Neill – had been added to his owner’s will and stood to inherit as much as £50m.

It was reported that a collection of more than 40 animals, headlined by Kalu, stood to inherit O’Neill’s Cape Town estate as she had been a prominent animal enthusiast.

Kalu is believed to have inspired the second volume of her memoirs, titled A Chimpanzee in the Wine Cellar.

However, he never actually inherited the promised millions, as it was revealed in 2010 that O’Neill had been swindled out of her fortune, leaving her “penniless”.

Another cat to be left with a sizable inheritance was Blackie, the feline pet of reclusive Brit Ben Rea.

The antique dealer died in 1988, but his death was made notable by his choice to leave his whole fortune – worth around £7m – to the last remaining cat from a group of 15, as well as several cat charities.

None of his estate was left to his family, with the only instructions to the charities that he left money to care for Blackie in his absence.

The iconic face of US TV has never shied away from how much she loves her dogs – she has had more than 20 of them over the course of her career.

It turns out that a significant chunk of her estate is set to be left to them when she passes away, as well.

It was claimed in 2007 that the media personality, who is believed to be worth over £1.7bn in total, has set aside as much as £21¼m for the care of her dogs when she dies.

“Over the years I have felt the truest, purest love—the love of God, really, I imagine that’s what God’s love feels like—is the love that comes from your dog,” Oprah said on a Super Soul Sunday episode in 2014.

According to the Wall Street Journal, small chihuahua Conchita was left a massive fortune by Miami socialite and heiress Gail Posner.

When she died in 2010 she left a £3m trust fund AND a mansion to Conchita and her two other dogs.

It’s also reported that during her lifetime, Mrs P would lavish thousands of dollars a month on treating the pooch to lavish gifts, manicures and fancy meals out.

In an ultimate rags-to-riches story, Tommaso was the cat of Maria Assunta, who was the childless widow of an Italian real estate mogul.

She found Tommaso as a stray on the streets of Rome and took him in.

After striving to find an organisation that could care for her beloved feline after her death, she eventually hit on the solution of transferring her net worth – around £92m – to him.

Following Maria’s death in 2011, the cat was cared for by Assunta’s longtime nurse, who reportedly moved out of Rome with the cat to an undisclosed location to avoid scam artists.

For funeral notices in your area visit funeral-notices.co.uk