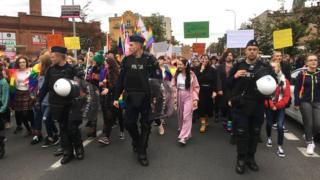 “We consider two communities fundamental, the family as one man, one woman and the children,” said the leader of Poland’s ruling Law and Justice party (PiS) at a recent convention.

LGBT+ rights have become the single biggest cultural issue in Poland’s election campaign ahead of Sunday’s vote. In the eyes of Jaroslaw Kaczynski’s national-conservative party and the Catholic Church, those rights are a threat to traditional Polish families and values.

Mr Kaczynski likes to identify threats to Polish society – during the election campaign four years ago, he said Middle Eastern migrants might bring “parasites and protozoa” to Poland.

This time around, according to Mr Kaczynski, the threat comes from LGBT+ people and from Europe, where families can have “two mummies or two daddies”, he said.

Poland’s 1993 constitution states that a marriage is between a man and a woman. Civil partnerships, be they between heterosexual or same-sex couples, are not legally recognised.

“Christianity is part of our national identity, the [Catholic] Church was and is the preacher and holder of the only commonly held system of values in Poland,” he said. “Outside of it… we have only nihilism.”

Senior Catholic Church figures have gone further, most notably the Archbishop of Krakow, Marek Jedraszewski, who on numerous occasions has identified the “LGBT lobby” and “gender ideology” as the new threat to Polish freedom following the end of communism in 1989, calling it “totalitarian” and a “great threat to our freedom”.

The couple who came back to fight for change

In the beautiful, medieval city of Torun, birthplace of the astronomer Copernicus, chef Mariusz Godlejewski rejected the notion that he was a threat. During more than a decade living in Ireland, Mariusz married his long-term partner Bartosz before the couple returned to their homeland last year.

“My husband and I have been together for 14 years. Who are we, two strangers living together? We are family as well,” he said. “Coming back here I knew what I was getting in to. I knew that I will lose all the rights with my husband we gained in Ireland but we wanted to come and help our friends to make the change.”

Mariusz believes it is only a matter of time before things do change but finds the tone of political debate depressing.

Last month, a professor from Torun’s Copernicus University, Aleksander Nalaskowski, was suspended after he likened homosexuality to “the plague” and complained that gay men and women were demanding not only tolerance, but acceptance.

Government-supporting circles argued his suspension was an abuse of free speech and he was subsequently reinstated. 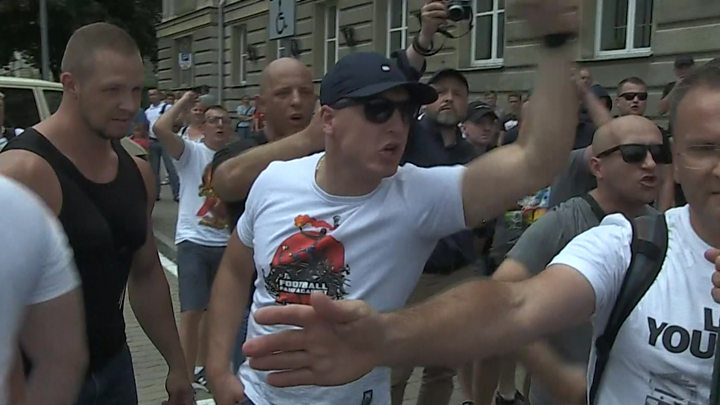 Spread of equality marches in Poland

Mariusz was organising the third equality march in Torun, in which more than a thousand people walked through the city guarded on both sides by helmeted riot police carrying shields.

A police water cannon I saw parked in the road was not required but violence has broken out during equality marches in the cities of Bialystok, where gangs of angry young men attacked parade participants, and in Lublin, where counter demonstrators clashed with police and two protesters were arrested after they reportedly brought homemade explosive devices.

Poland remains more socially conservative than many countries in Western Europe but attitudes to LGBT+ issues are changing.

Opinion poll based on sample of 1,000 people

There are more and more equality marches, 32 this year compared to 13 last year. Most, like the one in Torun, are joyful, peaceful events.

‘They have to be aware they are sinners’

Underneath a statue of Copernicus in the city centre, a small counter demonstration gathered before the equality march. There were several members of the far-right National Radical Camp, holding their green and white flags emblazoned with a falanga sword, which is associated with fascism.

There was also a photo of an equality parade showing two male marchers holding a rainbow flag from behind, their bare buttocks pixellated. Some people held crosses and handed out white, plastic rosary beads before prayers were said for the souls of the equality march participants.

“We don’t want to arrest them, we don’t want to get rid of them. They have to be aware they are sinners. Me as a Catholic person, I want to show them a better path of their life,” he added.

If opinion polls are correct, PiS should win the October 13 election comfortably.

Attitudes in Poland may be changing, but if Mr Kaczynski’s party does win a second term, there seems little chance that homosexual couples will enjoy the same rights as their heterosexual neighbours any time soon.

The leader of the Scottish Conservative Party told Express.co.uk that the Scottish Government needed to find solutions so that the whole of the United Kingdom…

Premier League referee Anthony Taylor has become an NHS volunteer as he supports his family through the coronavirus pandemic. A few days ago, the government…

The possibility of having COVID-19 started to become real for Brock Weston as he drove home to Saskatchewan. The Wisconsin college student had had fever…

P.E.I.’s top doctor will provide a second update on the province’s COVID-19 response on Friday afternoon. The province will stream the update live online at…

The counties of Hastings and Prince Edward have declared a state of emergency in light of the new coronavirus pandemic. On Thursday, both counties announced…

MOSCOW (Reuters) – A new OPEC+ deal to balance oil markets might be possible if other countries join in, Kirill Dmitriev, head of Russia’s sovereign…