The new U.S. alliance with Australia and Britain against China has put Europe closer to a question it has tried to avoid: Which side are you on? 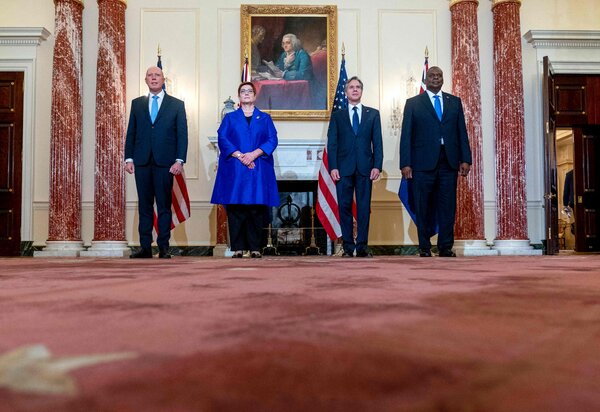 BRUSSELS — Until this week, the so-called “pivot to Asia” by the United States had been more of a threat than a reality for Europe. But that changed when the Biden administration announced a new defense alliance against China that has left Europe facing an implicit question:

Which side are you on?

It is a question that European leaders have studiously sought to avoid since former President Barack Obama first articulated that America should “pivot” resources and attention to Asia as part of its rivalry with China. European leaders hoped that the relationship between the two superpowers could remain stable and that Europe could balance its interests between the two.

Then the Trump administration sharply raised the temperature with China with tariffs and other trade barriers. And now the Biden administration on Wednesday announced an alliance between the United States, Britain and Australia that would help Australia deploy nuclear-powered submarines in the Pacific — and, in doing so, also tore up a $66 billion deal for Australia to buy a French fleet of diesel-powered subs.

“Europeans want to defer the moment of truth, to not make a choice between the two,” said Thomas Gomart, director of the French Institute of International Relations, or IFRI. “The Biden administration, like the Trump one, is provoking the moment of choice.’’

France was enraged. Yet if it was a humiliation — as well as the cancellation of a lucrative defense deal — it possibly did have a silver lining for France’s broader goals. President Emmanuel Macron of France has been Europe’s loudest proponent of “strategic autonomy,” the idea that Europe needs to retain a balanced approach to the United States and China.

“We must survive on our own, as others do,” said Josep Borrell Fontelles, the European Union’s foreign policy chief, echoing the French line.

The French embarrassment — the Americans also announced the submarine deal with little if any warning — came after the disastrous fall of Afghanistan. European allies were furious with the Biden administration, blaming the Americans for acting with little or no consultation and feeding Mr. Macron’s argument that the United States is no longer an entirely reliable security partner.

“The submarines and Afghanistan, it reinforces the French narrative that you can’t trust the Americans,’’ said Ulrich Speck of the German Marshall Fund in Berlin.