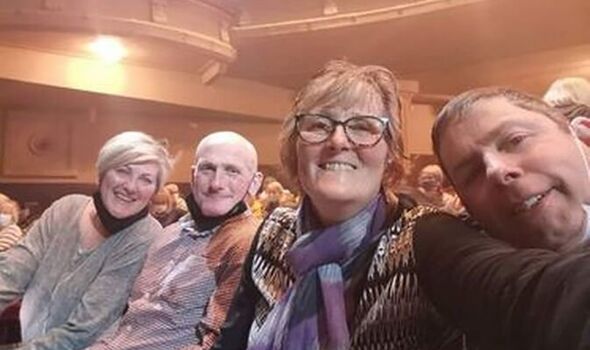 Dot Grant, 52, was excited to return to a theatre for the first time since the Covid lockdown last Wednesday. She watched Bat Out Of Hell musical at Edinburgh Playhouse with fiancé Dennis, 61, and her sister and brother-in-law but, prior to the interval, she claimed an usher “flashed their torch” at her while she matched the beat of the rousing songs on her leg while quietly singing underneath her mask.

Dot claims she was told her actions were “distracting” and she was removed from the theatre at the break.

“I went to speak to the usher not long after this and asked why. Her response was that my actions were a distraction to other audience members and there is no singing,” the theatre-lover, from Arbroath, Scotland, said.

“I was tapping my thigh in time to the music and singing under my mask and did not think I was doing anything wrong.

“It was explained to me that people had been complaining about my actions of singing and dancing in my seat, that it was a distraction and off-putting for the cast.

“I had been singing and I waved my hands a few times, but I didn’t think that was wrong, I’ve never been treated like that in any theatre before or since.

“I think there were six security people in the aisle, when outside the bottom bar area, another two arrived, so I was surrounded by eight men which made me feel very uncomfortable and uneasy.”

Dot told Edinburgh Live that audience members were not warned to stay silent throughout the production.

Another guest was escorted out of  Edinburgh Playhouse last week for “toe-tapping” during the Meat Loaf tribute show.

And Dot too felt “uneasy” with the approach staff took at the venue.

She claims ushers told her she was “at a musical theatre show, not a concert”.

Dot continued: “The final song was being played and I asked if I could stand at the back to listen but was told ‘no’ and that I was being shown the door to leave the theatre.

“As I was waiting outside for my family, I had people from the theatre come up to me and stated they were shocked at how I was treated and complained on my behalf.

“Everyone has been shocked by how we were treated at the Playhouse and I can’t see us ever returning.”

Edinburgh Playhouse is a historic venue in the centre of the Scottish capital. With more than 3,000 seats, it is the second largest theatre in the UK after the Hammersmith Apollo.

A spokesperson for the theatre said: “We want everyone to have a great night out, but unless the show has a ‘Singalong’ in the title, or is invited by the performers, audience participation is not encouraged.

“This is partly out of respect for the actors, but is mainly in consideration for the majority who have paid to listen to the performances taking place on stage.”

They added: “This is not a new policy within any theatre and persistent anti-social behaviour towards other audience members or our staff will not be tolerated.”