But now Dick and Angel Strawbridge, who’ve breezed through problems like dodgy electrics and a stinky moat, face their biggest challenge yet. Not only have they had to stop filming the new C4 series of Escape to the Chateau, they have had to cancel the dozen or so vintage weddings booked for 2020, all thanks to the pandemic. And while ex-Army colonel and engineer Dick is a man who can turn his hand to just about anything, devastated brides, it turns out, are beyond his skill set.

Sitting beside him in the splendid surroundings of Chateau de la Motte, Angel explains the size of the problem.

“Usually we would find a new date in the diary for the weddings that we’ve had to cancel up until September but 2021 and 2022 are already fully booked.

“We’ve had to make incredibly difficult calls to say, ‘There’s no way we can fit your wedding in next year or even in the future.’ “We simply can’t fit two years into one.

“There have been a lot of upset brides but we have done our best. It is heart-breaking.”

Giving his wife a comforting hug, Dick chimes in: “The difficulty is managing disappointment and that has been the hardest part for Angela. (He always calls her Angela.) “I don’t get to talk to anybody. I’m not allowed – I’m a bit too blunt with the brides and there are enough tears as it is. But Angela is always great at trying to find a way forward.”

It’s not in the couple’s nature to be defeated and they reveal how they have been taking part in virtual marriages. 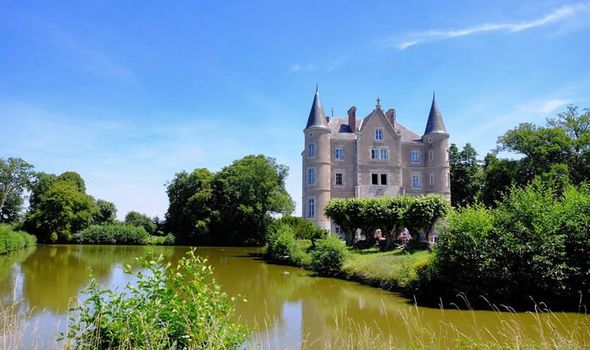 “We’ve done Zoom weddings with some people where they’ve all got dressed up and so have we,” laughs Angel, before Dick adds: “We’ve certainly joined them for the celebration!” Angel breaks into her dazzling smile and says: “Yeah and it’s given us a chance to have a little drink in the afternoon.”

And no one would begrudge them that. They have been constantly on the go since 2015, when they traded in their two-bed Essex flat and spent £280,000 on the derelict chateau in Pays de la Loire, western France.

Moving in mid-winter, they had to install electricity, heating and source labour to revive the sewage system (it drained into the moat) in just nine months as their own wedding deadline loomed. To supplement their £20,000 budget, Dick went to America for three months to film a series with National Geographic, leaving Angel with toddler Arthur and newborn daughter Dorothy. The children are now seven and six.

At first it seemed as if they had taken on the impossible, a feeling that came flooding back as they wrote their new book, A Year at the Chateau. 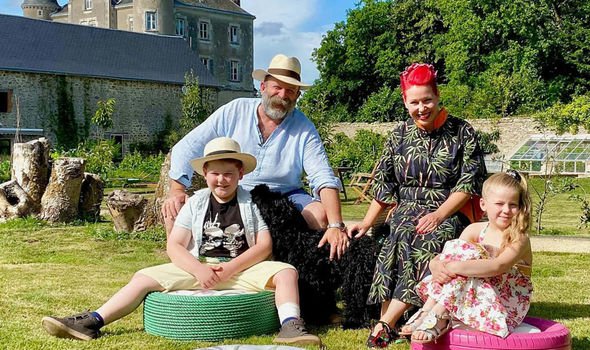 “In the first series, we moved into the Chateau on February 15, 2015, at five in the morning Angela took me to the station and I went away to America,” recalls Dick.

“I was away for three-quarters of our first three months to earn money to pay for renovations, and Angela was in the chateau, which was a ruin.

“And that was tough, especially for a girl from east London, who wasn’t used to creepy-crawlies or the dark!” Angel chips in: “I was a full-time mum and I was still feeding Dorothy – she was always in my papoose. The only time I got to do things was when the kids were asleep.

“There were bedrooms infested with flies, turrets inhabited by bats, the wind was rattling through the cracked windows, and we had just one working toilet, which flushed into the moat.

“We haven’t had time to write a book about our first year until lockdown. But it was very cathartic and it made us realise how much we’ve achieved.

“It’s also a relief to know the income we’re not getting from the wedding business has been substituted partly by the book, and we’ve filmed a new show in lockdown called Make, Do and Mend.”

Dick, 59, and vintage stylist Angel, 42, have worked tirelessly to renovate the five-storey chateau, its 45 rooms, seven outbuildings and the coach house they converted for Angel’s mum and dad, who help out.

Many assume Channel 4 bankrolled such an enormous project but Dick and Angel are quick to dispel that rumour.

“Escape to the Chateau has allowed us to do all of the other things such as set up the glamping business, buy the narrowboat and renovate the walled garden, but we’ve funded the series through our wedding business to be very, very blunt,” says Dick.

“The things we do here, the television channel wouldn’t give us funding for.”

Angel interjects: “We often read comments on social media that say things like “the channel pays for it” and “no one pays for anything”.

“Yes we get a presenting fee, but the reason why we allow cameras in is that it gives us a beautiful documentary of our family life and it has raised our profile.

“We are business people and we will try to make hay while the sun shines and we shouldn’t be ashamed of that because we’ve got a chateau to do up.”

In Escape to the Chateau: Make, Do and Mend, a four-part series, Dick and Angel help families solve their DIY dilemmas.

And, because of lockdown, they’ve had to film all the segments at the chateau and speak to the contributors over Skype.

“We love people contacting us to ask about how we do things,” says Dick. “We’ve been intimately involved with people on a project-by-project basis, talking them through it online and it’s given them confidence to do things they wouldn’t normally do.

“The example that comes to mind is Miriam and her sky-blue bathroom. Miriam and her husband had moved into a new house and they wanted to know what they could do with the bathroom to make it liveable for lockdown. 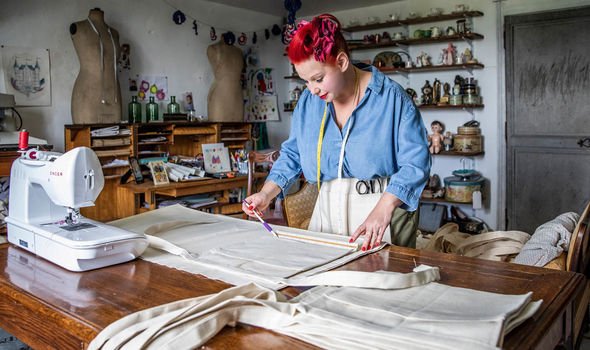 Angel adds: “All I did was to give her the tools and the colours that worked together and Miriam became this confident lady who made this incredible hanging shelf, painted the walls a gorgeous petrol blue, re-did all her grouting and broke it up with rugs and pictures. It’s absolutely gorgeous.We’ve been on emotional journeys with these people.”

Dick adds: “Angela cried most of the way through the renovation of a teenage bedroom. Thirteen-year-old Iola was going from a little girl’s pink bedroom to a young ladies’ bedroom but every time Angela looked at Lola she saw Dorothy growing up.”

Angel continues: “The room Lola had when she was a young girl was very similar to how Dorothy’s is now. She’s only six but she will be a teenager before we know it. They’re always your babies and you want them to stay that way.”

So would Angel consider having another baby? Before she can answer, Dick jumps in: “She will be bloody clever if she does that. I got sent away to get ‘sorted’, didn’t I?” As Angel giggles, Dick attempts to change the subject: “But we have got a puppy.”

“Dick and the kids always wanted a puppy,” says Angel. “I’ve never had a dog and it is a lot of work. It’s like having another baby.”

But she wouldn’t be without her now, suggests Dick. “That’s true. I wouldn’t,” she agrees. Angel admits their relationship, which viewers have seen play out under the most testing of circumstances, is “a bit of a cheesy love story”.

“It is true that our eyes met across a crowded room at our agent’s 40th birthday that I was hosting and we are still madly in love,” confesses Angel, who was then running her business The Vintage Patisserie.

“We argue all the time. We are made for each other because we are both so opinionated and we both think we are right all the time.”

When the couple first met in 2010, babies were not at the forefront of Dick’s thoughts. He was already a father to two adult children from his first marriage. 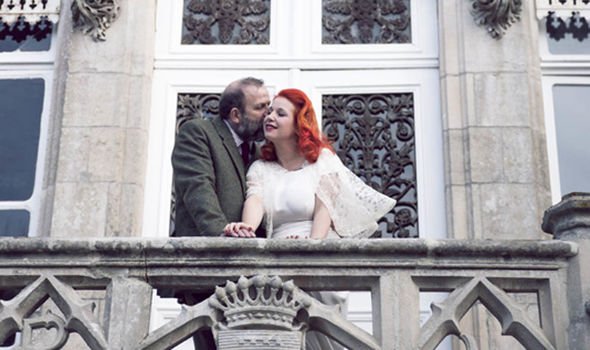 “We had this conversation and Angela said, ‘It doesn’t matter if we don’t have children, it won’t be a problem’.”

“I don’t remember that,” interrupts Angel. “You are telling porky-pies because you bloody well did,” accuses Dick.

“That was somebody else you took on a date,” she quips.

“It couldn’t have been,” he retorts, “because you were the first date I went on six years after being separated.”

Then, softening, he adds: “I was the wrong side of 50, but we fell in love very quickly. There are nearly 20 years between us and after we’d been together for a short period, I said, ‘This is wonderful but you’ve got to find a young man.You need to be a mum.’

And do you know what the bloody woman did? She said, ‘I want you.’ To which I went, ‘Oh ****.’ We hadn’t been together long when Angela gave me the most beautiful hand-made calendar with lovely little pictures of her on it.

“The year was 2012 and she had ringed the month of October and it said, ‘Impregnate me by…’ ” Angel reveals: “I’m not going to deny it. It was a bit of a joke but he took it really seriously – and it worked!” Within three years of meeting, their first child Arthur arrived at the beginning of 2013 and Dorothy was born in April 2014.

The children have adapted to French life and are already bilingual – unlike Dick and Angel, who’ve yet to master the language.

So home-schooling children who have lessons in French has proved a bit of a challenge, one which Dick has mostly taken on. “Let me tell you something,” says Dick.

“Angela came to my morning lesson and she was so naughty, I nearly put her in the corner. I wanted to smack her bum because she wouldn’t do as she was told.”

Angel giggles: “I was having far too much fun. But Dick is so knowledgeable. I’m the one to take the kids up into the craft room to do something with a toilet roll. That’s more me.”