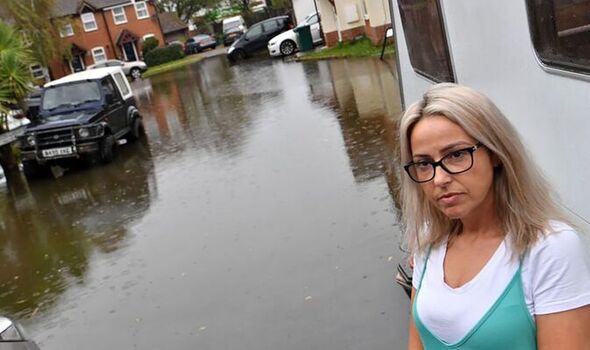 Furious villagers have been left trapped by knee-high flooding outside their homes – and they say it happens every time it rains.

People living in Stanwell, Surrey, say residential streets suffer flooding every year but the current levels are the worst since 2008. The village has seen significant rainfall since Wednesday and families have been unable to get to work, take their children to school or receive visits from social care.

But Sim Tannk, a 35-year-old mother, said: “It’s getting higher and higher, my son hasn’t gone to school and I haven’t gone to work.

“Every time we get rain it goes up and everyone says ‘we can’t do anything.’ We’re getting passed from pillar to post and it’s ridiculous.

“If you don’t pay your council tax, two days later they’ll send a letter round your house but when we need something they say ‘we haven’t got any resources.’ We’ve had to organise our own sandbags but if it damages our property or cars who’s going to pay for it?

“It’s disgusting to be quite honest. There’s no support, nothing. We’re trying to figure out things ourselves but we can’t start opening the drains. Not once has someone come down here to check it and give a plan of action. It’s constant fobbing off. You start off calm but you get to the point when it becomes a joke.”

Anna-Marie Smith-Clark, 37, who has lived in the area for more than 10 years, said: “It’s ongoing, every year is the same and nothing gets done about it ever.

“This is probably the worst it’s been since 2008. The water was in my car’s footwells.

“It’s a joke. None of them distribute sandbags anymore, we have to prepare for it ourselves. I don’t know why we kept being left year after year to deal with this. I have a kid in college who’s not able to go today. I’ve got work tomorrow but am I even going to be able to go?”

Robert Evans, a Labour councillor for Stanwell and Stanwell Moor at Surrey County Council, acknowledges the close proximity to the waterway but has called the situation “totally unacceptable”.

The councillor, who met with residents this week, said: “Nobody should have to live in Surrey or Stanwell in conditions like this. There isn’t the equipment or the facility to pump it away anywhere. They can’t just pump it into another drain because that will just get flooded.

“This area needs a lot of heavy investment in an underground system because this happens once or twice every year. But this is worse, I’ve spoken to some good people at the council who are at their wit’s end as well.”

It’s disgusting to be quite honest. There’s no support, nothing. We’re trying to figure out things ourselves but we can’t start opening the drains

John Collin, 85, has had to get his shopping delivered to him by friends due to the floods.

The pensioner, who has lived in Stanwell for more than 25 years, said: “It happens every year.

“This water won’t run away until the drains are unblocked. Nobody from the council has been around here. It’s not good enough but it happens every year, people are getting fed up with it.”

Bal Bains, 47, said her gas and heating is no longer working, meaning husband Sanj and daughters, Jaya, 10, and Simran, seven, were forced to stay at her sister’s house recently.

“The flooding is bad but not as bad as the fact that my kids had to sleep with two blankets yesterday with their jumpers and socks on. We’ve been here 12 years but this is the first time I’ve properly noticed it,” Bal said.

“It’s really frustrating, everyone’s passing the buck and it’s not fair. I’ve had to take time off from work today and because I’m not ill I have to take it as annual leave. It means I have less time with the kids over the Christmas holidays. It all has a knock-on effect.”

In response to the complaints, a spokesperson for Thames Water said: “We’ve received reports of flooding and a blockage in Long Lane, Stanwell and our engineers will be attending the site.

“We’re working hard to keep our sewer network operating as normal and responding to a high volume of customer calls following very heavy rain at the weekend.

“We’ve got as many engineers as possible visiting homes and business to help customers across our region and we’re sorry we’re taking longer to respond to our customers than normal.”

A spokesperson for Surrey County Council said its workers had been on site over the last 48 hours responding to calls from residents.

They said: “We are liaising closely with Thames Water who will be sending engineers to the area to assess the situation shortly. This is one of a number of reports of flooding across Surrey.”

The council said: “We understand concerns from residents regarding the localised groundwater flooding in Stanwell and are working with our partner agencies to ensure the relevant agency with the right responsibility and equipment can intervene.