Labour MP Geriant Davies argued Theresa May is no longer leading Brexit and claimed it may be time for a Brexiteer like Michael Gove or second in command David Lidington to take over. In a fiery discussion on talk radio, Mr Davies compared Mrs May to a drunk driver who no longer had control of the wheel. Mr Davies told the TalkRadio host: “Well you mentioned Volvo trialling some car that pulls people over when they are drunk.

“I think the situation is, with Theresa May it is clear that she is not in charge of the wheel anymore.

“She has basically said there will be no public vote and yet we see a million people marching and five million people signing petitions within two days.

“People in the Conservative party are thinking hold on let’s stop pouring water into the Titanic and let’s get on the liferaft.

“The way out is for somebody like Gove or Lidington to say okay I am for Brexit, we have got a deal lets put it back to the people. 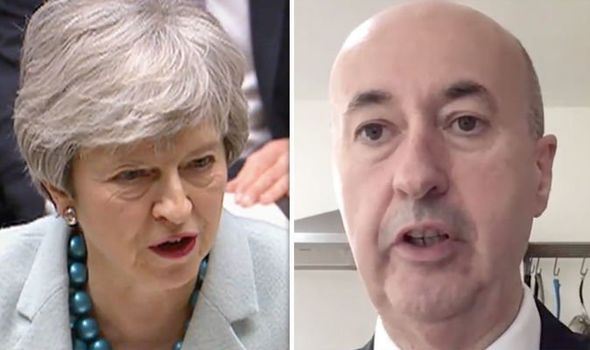 “Then they will be seen as the democrats if we remain, as I anticipate we would.

“They can say, well fair enough we will go with that and have an election.

Theresa May announced today in the House of Commons that currently there isn’t enough support for the Government to hold a third meaningful vote to get her Brexit withdrawal agreement through.

At this stage, it appears that MPs will seize control of Parliamentary agenda and vote on alternative plans if the Letwin amendment passes.

These alternatives include Revoking Article 50, a Norway Plus deal, a no deal Brexit, a second referendum, a customs union or joining the single market.

Regardless of what is agreed by Parliament, the EU will have to accept or deny the choice of the House of Commons, in the event of the EU saying no, it is likely that the UK will leave on no deal.