Members of the influential Tory backbench 1922 Committee held talks this week in Westminster following calls by MPs for Theresa May to step down. Under current party rules, MPs cannot mount a fresh leadership challenge until 12 months after last December’s failed attempt. The Prime Minister saw off a bid to remove her by a margin of 200-117 in a vote of Tory MPs on December 12 2018. But Mrs Latham, who is the joint executive secretary of the 1922 Committee, insisted the executive are still able to change the rules.

Theresa May is not finishing the job

Sky News’ Adam Boulton asked the Tory MP for Mid Derbyshire: “If Mrs May were to hang on, are you absolutely confident that the party would boot her out in December?”

In response, Mrs Latham said she is “pretty certain” the Conservative Party would push Mrs May out as a leader.

She added: “I mean, we will wait and see what the chairmans of the party say. You know, the chairmen of the associations are coming together for an extraordinary meeting which has never happened before.

“Wait and see what they have got to say. But I think they will be telling their Members of Parliament ‘you’ve got to change’.

“I’m certainly getting that message from constituents as well as the wider world.” 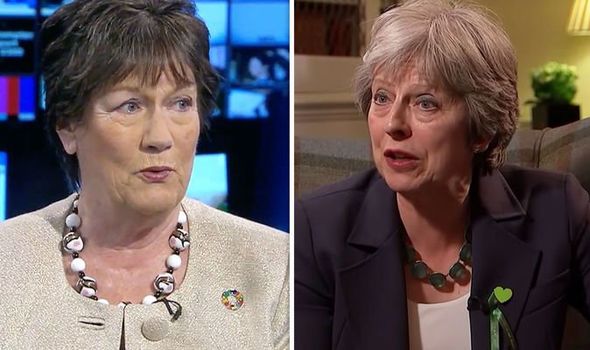 Following a meeting of the 1922 executive, it was revealed this week that rules on whether to allow another leadership challenge as early as June will not be rewritten.

The 1922 Committee could instead call for Mrs May to provide a clear schedule for her departure if her Brexit deal continues to be rejected.

Mrs Latham said she was one of the executives who did want to change the voting rules to allow a vote after six months rather than 12.

She ridiculed the Prime Minister for “not finishing the job” and added: “I was somebody personally who did want a rule change because I think we are in a status at the moment where we need to change and move forward.

“And we are doing nothing at the moment.”

“That seems to defy logic and I would like to see her make clear exactly what her plans are.”

Following the meeting of the 1922, chairman Sir Graham Brady said: “The decision was first of all that we determined there should not be a rule change to remove the 12-month period of grace during which a second confidence vote cannot be held.

“We further determined that we should remind colleagues that it is always available to them to write to me as chairman of the 1922 Committee raising concerns or setting out their thoughts, including concerns about the leadership of the party, and that the strength of opinion would be communicated by me to the leader of the party should they decide to do so.

“Thirdly, we determined that following the Prime Minister’s decision a few weeks ago to set out a clear schedule for departure as leader of the party in the event of the Withdrawal Agreement being passed, we would seek similar clarity from her in other circumstances.”

He added: “I think the 1922 executive is asking on behalf of the Conservative Party in Parliament that we should have a clear roadmap forward.”