The source claimed Mr Johnson “simplifies things” and would present a choice between a no-deal Brexit or abandoning the divorce altogether. Responding to Mrs May’s resignation announcement, the European Commission insisted they would not allow the withdrawal agreement to be reopened by her successor. Mr Johnson, the former foreign secretary, said he would attempt to secure changes to the Prime Minister’s hated Brexit deal announcing his candidacy.

But his attempts have not deterred some in Brussels, who believe he will bring an end to Brexit through no deal or by abandoning Britain’s divorce.

The senior EU diplomat said: “There are some of us who would welcome Boris. It simplifies things. It means the choice is no deal or remain.

“And Boris can only go one way.”

A second EU diplomat said: “It is a fundamental question of our credibility at a time when the EU needs to hold the line, against populism, Donald Trump on trade and Russia. 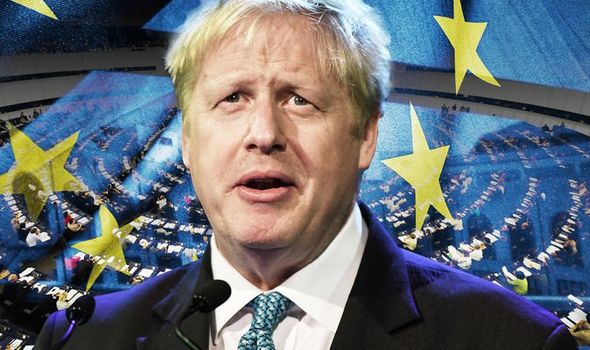 “Will it throw all of that away just to help a Brexiteer like Boris Johnson? Can you see Emmanuel Macron doing that?”

In the wake of Mrs May’s announcement, Brussels made clear that its negotiators would stand strong in their refusal to reopen her Brexit deal.

A European Commission spokeswoman said: Our position on the withdrawal agreement and everything has been set out, there is no change to that.

“Indeed nothing has change, we have set out our position on the withdrawal agreement and on the political declaration.”

Jean-Claude Juncker, the Commission president, praised Mrs May upon hearing of her decision to resign.

His spokeswoman said: “President Juncker followed Prime Minister May’s announcement this morning without personal joy. The President very much liked and appreciated working with Prime Minister May and as he has said before, Theresa May is a woman of courage for whom he has great respect.”

She added: “He will equally respect and establish working relations with any new prime minister, whoever they may be without stopping, his conversations with Prime Minister May.”

Michel Barnier, the EU’s chief Brexit negotiator, said: “I would like to express my full respect for Theresa May and for her determination, as Prime Minister, in working towards the UK’s orderly withdrawal from the EU.”

EU leaders will discuss the “next steps” in the Brexit process when they convene in Brussels next week.

The leaders summit was due to be held in order to discuss Mr Juncker’s successor but they will make time to discuss Mrs May’s too.

Mrs May announced her resignation on the steps of Number 10 this morning, breaking down in tears during her speech.

The Prime Minister said she would step down as Conservative leader on June 7, after Donald Trump’s official state visit to the UK.

She will stay on in Downing Street until her successor is appointed by the Conservative party.

“It is and will always remain a deep regret that I have not been able to deliver Brexit,” she said.

She added it was in the “best interests of the country for a new prime minister to lead that effort”.