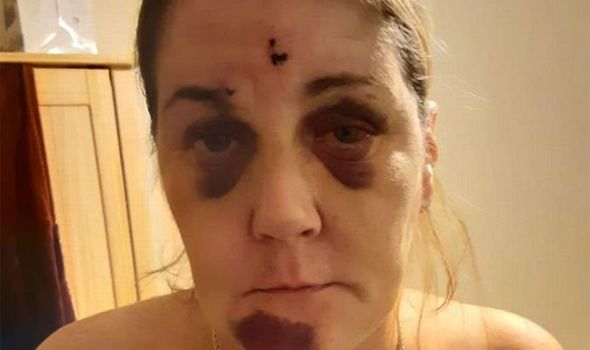 Amanda Bulloch, 52, attended her 70-year-old pal’s funeral at Lodge Hill Cemetery in Selly Oak on October 18. She said a a woman initially started to be abusive as people danced together at the wake gathering.

Ms Bulloch claimed she was punched and kicked by five people at a house on Pershore Road, Cotteridge after the wake.

She said she suffered two black eyes and bruises all over her body, saying the group “literally kicked the s**t out of me.”

Ms Bulloch, who suffers from emphysema and heart issues, managed to flee the property and raise the alarm when her carer called the emergency services.

However, the alleged attack has left her “petrified” to leave her home in Nechells.

Ms Bulloch told Birmingham Live: “My friend’s mum passed away who I’ve known all my life.

“We’d been at the crematorium and we’d come back to her friend’s house and everyone had a drink to celebrate her life.

“Everyone was dancing and the next thing I know I’ve got two men and three women literally kicking the s**t out of me.

“My carer called 999. I tried to get my stuff and get out of there and I got attacked again.

“My body is literally black and blue.”

Speaking to the outlet, Ms Bulloch added she went to A&E at Heartlands Hospital as she was struggling to breathe.

She was discharged by doctors six-hours later.

She said: “I’m petrified to come out my door. I think I have post traumatic disorder.

“I’m also having nightmares of trying to get out of the door.”

According to the 52 year old, West Midlands Police have yet to take her statement about the alleged assault.

She added: “No-one seems to care. No-one has come around to take a proper police report.

“I would have expected police to have taken this more seriously.”

A police spokesperson told Express.co.uk: “We are investigating a serious assault on a woman that happened on the Pershore Road in Birmingham at 3pm on 18 October.

“We have taken initial details from the victim and are investigating.

“A number of lines of enquiry have already been identified.

“Anyone with information is asked to contact us via Live Chat on our website and quote crime reference 20/1826558/21.”