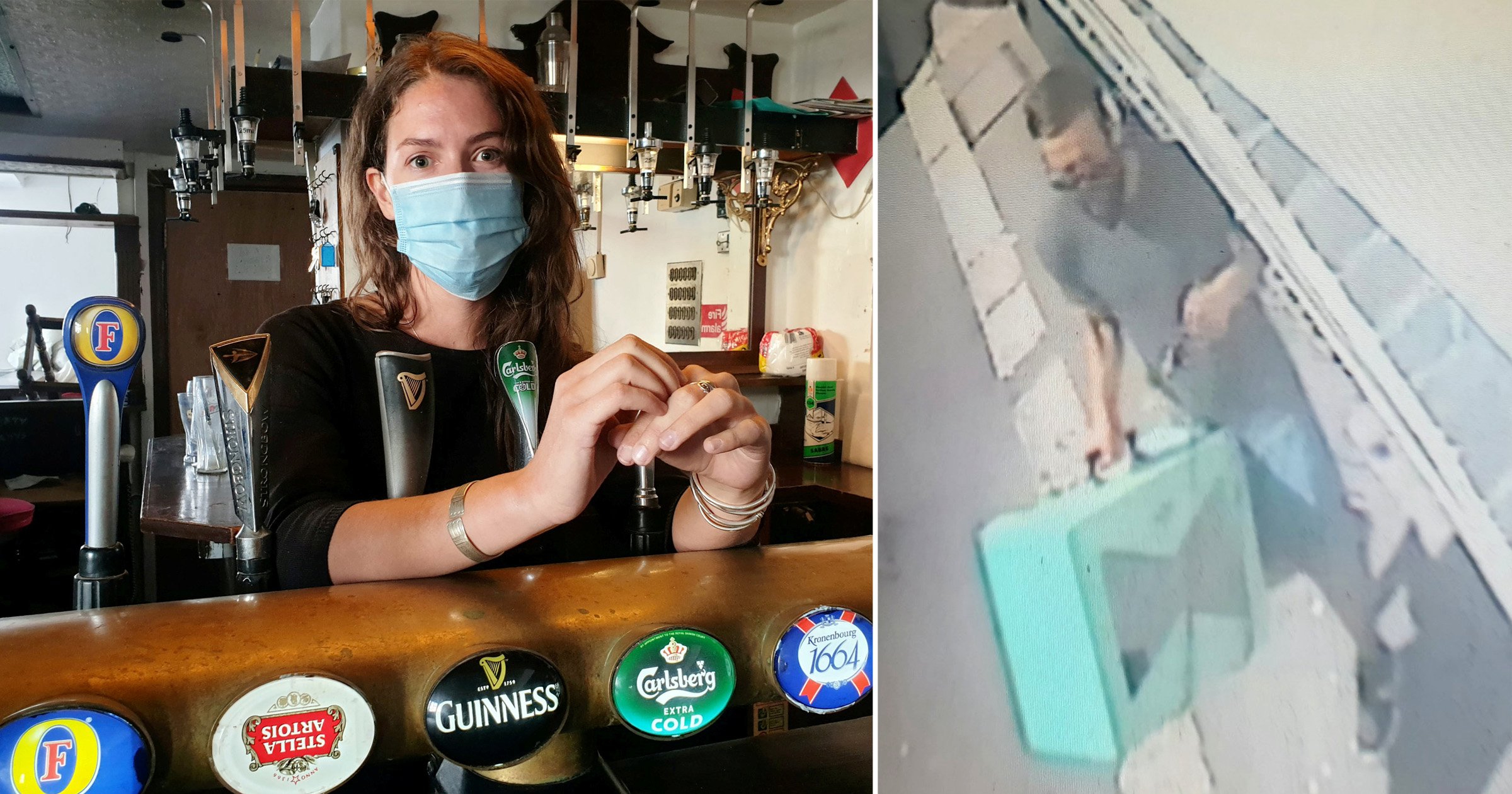 A pub landlord watched the man who had stolen her rare guitar sail away on a ferry because both the British and French police had refused to arrest him.

The thief ‘committed the perfect crime’ by taking £5,000 worth of equipment from the Castle Inn – the ‘last pub in England’ – before immediately leaving UK soil by going through customs.

He was still at the port in Dover with the things he’d taken when the landlord realised what had happened.

But English police refused to arrest him because he was already on the French side of passport control and waiting for a ferry.

The French gendarme then also refused to take action because the crime had been committed on British soil.

Publican Jemima Burne, 29, has been left infuriated by the catch-22-like experience and says the thief has made a ‘laughing stock’ of everyone.

On June 9, the bearded suspect, thought to be an Italian man named Luca, strolled calmly into the pub, which sits just next to the ferry terminal, and stole a rare guitar, amp and other items.

He was caught on CCTV around 1pm loading the stuff into a dark blue Peugeot before driving off.

Jemima was at home in Deal at the time but was tipped off by builders working on the site and tracked ‘Luca’ down to the port.

She urged both sets of police to do something to stop him escaping but neither were able to act.

She said: ‘I had witnesses, CCTV evidence of him carrying out the crime, pictures of him making his getaway in a car that he was now sitting in – alongside stolen loot.

‘Despite all that, the police forces of two countries stood to the side, waved this criminal scumbag onto the ferry – and let him off scot free.

‘Thank the Lord he hadn’t done something more serious like murdered me. In that case, they’d have probably offered him free counselling and a satnav to find his way home safely.

‘I thought Brexit meant we were taking back control of our borders – not handing them over to the French.

‘The idiocy of it all has left me absolutely fuming while this crook will be back home now playing tunes on my guitar through my amp and laughing his head off.’

After complaining to police about what happened, she says she received a ‘ridiculous explanation’ for the saga.

Officers would now have to issue a European Arrest Warrant to get the stuff back, something they are highly unlikely to do for a relatively minor crime.

But they did suggest Jemima call the Italian police and ask ‘Luca’ if he wouldn’t mind sending the things back voluntarily.

Police Sergeant Adam Scott, of Dover Police, said in the letter to Jemima that they would act if the man ever comes back in the same car.

He said: ‘He travelled on a one way ticket, so there is no indication as to when he will return to the UK.

‘The theft appears to have been timed with embarkation in mind, reducing the chances of capture.

‘The vehicle has been nominated on our police system to be stopped should it ever return to the UK. Action will then be taken on the occupants regarding this theft.’

A Kent police spokesperson refused to comment because the suspect had not been charged with an offence.

Port of Dover police failed to respond to repeated requests for a comment.