Police officers can submit any burglaries, thefts or robberies they are investigating to a dedicated unit overseen by HM Prison and Probation Service. Staff will then check the locations visited by those on tags against the crimes, allowing police to either rule out suspects or investigate further. The Ministry of Justice said this will be a “vital extra source of intelligence” because over four in five theft and burglary investigations are shelved without a suspect being identified.

The scheme will launch on April 12 initially in Avon and Somerset, Cheshire, Gloucestershire, Gwent, Humberside and West Midlands, before it is expanded to 13 more areas in September.

Justice chiefs said over half of criminals convicted of theft offences, including burglary, and almost one third of thugs convicted of robbery reoffend within a year. Reoffending rates for all other cases are 23 percent.

The GPS tags will be monitored by satellites 24 hours a day.

Officials hope “this novel approach will reduce the estimated £4.8billion burden such crimes place on the taxpayer every year”. 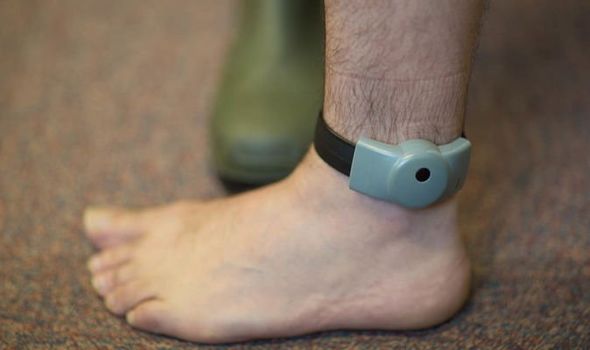 Crime and Policing Minister Kit Malthouse said tagging “prolific offenders, so we know where they are 24 hours a day, should be powerful persuasion to change their ways and will help police find and charge them if they don’t”.

Jon Stratford of the National Police Chiefs’ Council said: “Officers will be able to quickly arrest and gather evidence against anyone suspected of being involved in a robbery, burglary or other theft.”

Sobriety tags, which monitor sweat and alert the probation service if alcohol is consumed, are also set to be expanded.

Alcohol is a factor in 39 percent of violent crimes.