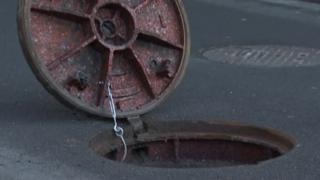 Thieves in Belgium have used sewers to tunnel into a bank vault near Antwerp’s diamond trading district.

Police were alerted on Sunday to a possible burglary and when they arrived they found the bank door shut with about 30 deposit boxes emptied inside.

The thieves appear to have had to squeeze through sewage pipes as narrow as 40cm (15 in) wide, before boring another tunnel to reach the bank.

Police have not yet said how much was stolen during the raid.

Els Liekens of the water company, Aquafin, said the robbery had been very risky.

“First of all, digging the tunnel towards the sewage system was dangerous for the robbers themselves because of a possible subsidence,” she said.

“And inside the sewer, you have all kinds of danger, such as gas concentrations coming from the waste water.”

Bank customers have been upset at a lack of information from the bank, with some saying the boxes contained their life savings.

“A lot of people are not only keeping money or jewels, but also family pieces,” one said.

A similar raid in the French city of Nice in 1976 saw a gang spend months tunnelling through sewers to access a branch of Société Générale. They plundered more than 200 safety boxes, making off with millions of dollars.