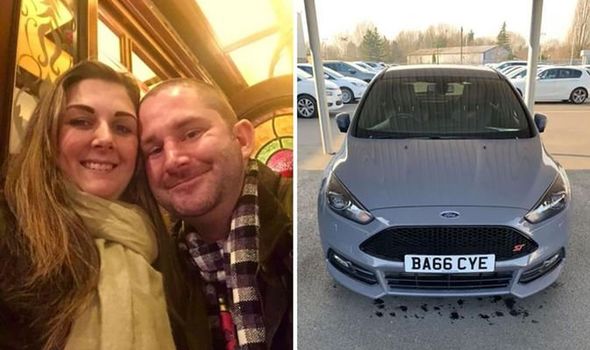 The thugs broke into the grey Ford Focus ST in the supermarket car park and sped away on Tuesday afternoon. It happened seconds after Leanne Wilkinson, 37, and her family got out of the car and entered the supermarket for groceries.

I’m still in a bit of shock. I only nipped into Asda. We just can’t believe it

The mum of three had finished the big ‘back to school’ shop elsewhere and had to pop to the Asda in Hyde, Greater Manchester, for food on the way home.

“I’m still in a bit of shock. I only nipped into Asda. We just can’t believe it,” Leanne told Manchester Evening News.

“The boys were complaining about it, but I insisted we needed to pop to Asda on the way home. That’s where it happened, and everything was still in the car.

“I came out of Asda, looked in the space where I’d parked up and there was a different car in it. I looked around, thinking maybe I had parked it somewhere else, but I knew it was definitely there.

“I’m just glad that they didn’t approach me when I was still in the car with the kids. We’re all fine and we’re not hurt.”

A store manager checked CCTV footage and told Leanne a silver Volkswagen Golf had followed her into the car park and stopped nearby.

Leanne’s car has keyless entry – and it’s believed the thieves used a device to capture the signal as the car was locked when Leanne and her sons, aged 10 and seven, made their way to the supermarket.

Leanne, a housing association officer, said: “I’ve no idea how long they were following me for.

“I don’t remember seeing a silver car but I had the boys at the back of the car, they were arguing at one point so I was probably not paying too much attention to it.

“But the manager said the car had definitely followed me into the car park.

“I keep remembering the stuff that was in the car – just little bits of things like a crystal pen my husband bought for one of our anniversaries.

“I stupidly left a work phone in there. I knew I was only popping in so I just chucked it in the glovebox. I had my North Face jacket on the back seat.

“But the main thing was the uniforms. I had only just bought them yesterday and all the receipts were in the bags, so it’s a bit of a nightmare. I’ll have to head out and buy everything again.”

Greater Manchester Police are investigating the theft of the car, which the family had owned since 2019.

And Leanne had recently sold her other car to share the Focus with 39-year-old husband Steven.

The aircraft engineer was twice made redundant during the pandemic.

The Ford Focus ST was stolen with its registration plate as BA66 CYE and its VIN number as WF05XXGCC5HJ13351.

The grey car, with large black alloy wheels, has slightly chipped paint on the rear bumper.