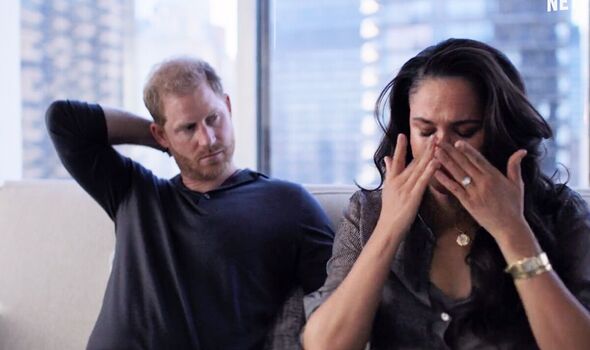 Meghan Markle opened up on depression and suicidal thoughts in the second volume of the Netflix documentary series released today. The Duchess of Sussex broke down as she shared an unprecedented account of her turbulent experience within the Royal Family. The second part of Prince Harry and Meghan’s controversial but greatly anticipated Netflix series was released on the streaming service today (Thursday).

The new episodes, which have shared an extraordinary account of life within the Royal Family, included fresh allegations against the monarchy for the failure to combat negative press coverage.

As the Duchess of Sussex recounted her experience at the forefront of the Royal Family and under the glare of the British press, she broke down in tears and was comforted by her husband, Prince Harry.

In the documentary series, Meghan Markle referred to an incident when, during a walkabout, a member of the public told her: “What you are doing to your father is not right”.

Meghan said “my entire centre was rocked to its core,” as she came to realise that “people actually believe” what is written about her in the tabloid press.

Then Prince Harry says: “What they were doing to her and the effect that it was having to her… Like, enough of the pain and suffering. Noone sees what’s happening behind closed doors.”

Allies of the couple then appear saying: “It was gloomy – she was just disappearing inside herself” and “I’d never seen her like that. It was hard – I was scared”.

And Meghan says: “All of this will stop if I’m not here. And that was the scariest thing about it. It was such clear thinking.”

Her mother, Doria Ragland, then says: “I remember her telling me that she wanted to take her own life. And that really broke my heart. Because I knew that it was bad but to just constantly be picked up by these vultures that she would actually think of not wanting to be here… That’s not an easy one for a mum to hear. And I can’t protect her.”

Prince Harry then says: “I was devastated. I knew that she was struggling – we were both struggling. But I never thought that it would get to that stage. And I felt angry and ashamed. I didn’t deal with that particularly well.”

The Samaritans can be reached round the clock, 24 hours a day, 365 days a year. If you need a response immediately, it’s best to call them on the phone. You can reach them by calling 116 123, by emailing [email protected] or by visiting www.samaritans.org.

The initial Netflix trailer for the hugely anticipated ‘Harry and Meghan’ docu-series had already teased footage of the Duchess in tears.

One clip included in the official trailer showed the Duchess of Sussex sat in an armchair as she appeared emotional. She had glossy eyes and partially covered her face with a closed fist as she rested her head on her hand.

Another extract showed the Duke and Duchess side by side on a sofa as Meghan wiped tears from her eyes and Prince Harry watched over her, evidently concerned.

Prince Harry was also depicted as emotionally drained in the teaser footage. One video captured the Prince as he released an exhausted sigh and covered his eyes with his palm, while his heavily pregnant wife could be seen approaching in the background.

In the first episode of the Netflix series, Prince Harry had already condemned the pressure placed on women who marry into the Royal Family.

Referencing his mother’s experience, the Prince explained: “I saw things, I experienced things, I learned things. The pain and suffering of women marrying into this institution.”

Speaking of the traditional expectation of a royal marriage, the Prince later added: “I think, for many people in the family, especially obviously the men, there can be a temptation or an urge to marry someone who would fit in the mould as opposed to somebody who you perhaps are destined to be with.

“The difference between making decisions with your head, or your heart.”

Within the second part of the explosive series, the Duke and Duchess of Sussex have described the relentless media pressure they faced and aired concerns over their security provision.

Prince Harry said: “I wonder what would have happened to us had we not got out when we did?”

He went on to speak of “institutional gaslighting” and described the couple’s departure from the UK as a “freedom flight”.

The Duchess has relayed her own concerns upon discovering their royal security protection had been “pulled”. Discussion of the couple’s security worries has arisen as Prince Harry’s legal challenge against the Home Office has continued.

King Charles’ son has filed a legal case against the Home Office over the decision not to provide him and his family with police protection during visits to the UK. It has been suggested the Duke of Sussex’s private American security team would not have sufficient access to intelligence within the UK.

He has also filed a second case which challenges the Home Office’s decision to reject an offer of private payment for police security.

The Samaritans can be reached round the clock, 24 hours a day, 365 days a year. If you need a response immediately, it’s best to call them on the phone. You can reach them by calling 116 123, by emailing [email protected] or by visiting www.samaritans.org.