Julie Burns, 53, only found out she had lost her job as cabin crew for Thomas Cook when her plane landed in Newcastle from Antalya.

Like the rest of the crew on her final flight, she turned up to work knowing she might not be paid – and was left stranded and asked to pay for her hotel room.

Ms Burns lives on her own with her son and says Thomas Cook was like a family to her.

The holiday firm collapsed after it failed to secure the £200m needed to keep it afloat – leaving 21,000 people jobless and hundreds of thousands of passengers stranded.

Ms Burns talked to Sky News about what happened on the day.

I’m still hoping that someone’s going to come in and buy it all and we’ve all got a job again.

I was on a flight when we found out that we were losing our jobs. I was positioned out to Newcastle for four days and we’d been coming back from Antalya.

Before the flight, one of the girls had her phone on so we could see Thomas Cook’s chief executive, Peter Fankhauser, coming out of a meeting and at the time it seemed positive.

We were all a little upbeat, although we had got on the flight not knowing if we were going to be paid for it.

The most heartbreaking thing is that the passengers knew what had happened before we did. 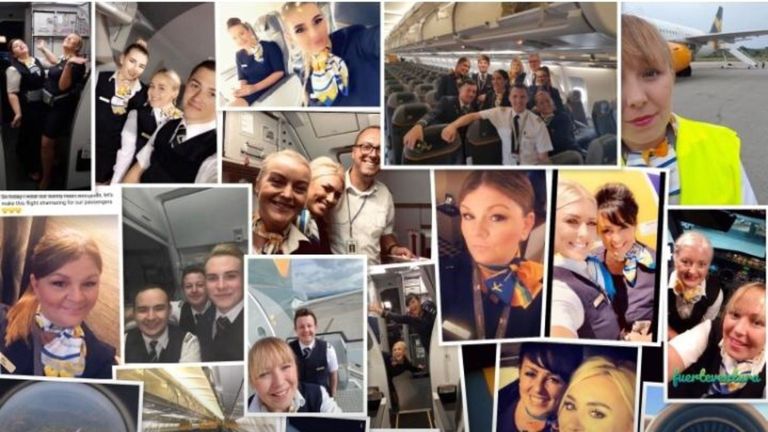 When we landed, they had their phones on and they saw the news.

After all the passengers had got off, the senior flight attendant came up and she went, “That’s it guys, game over”.

We all started crying and were really upset.

Then it got even more upsetting as when were cashing up the bar, we saw the administrators coming in and we all knew we weren’t getting paid.

I’d only worked there for two years and it was like a family. I was so proud to work for such an iconic airline.

We’d heard rumbles for a while that it might go under and we were kept updated until a few days ago – then it all went quiet. 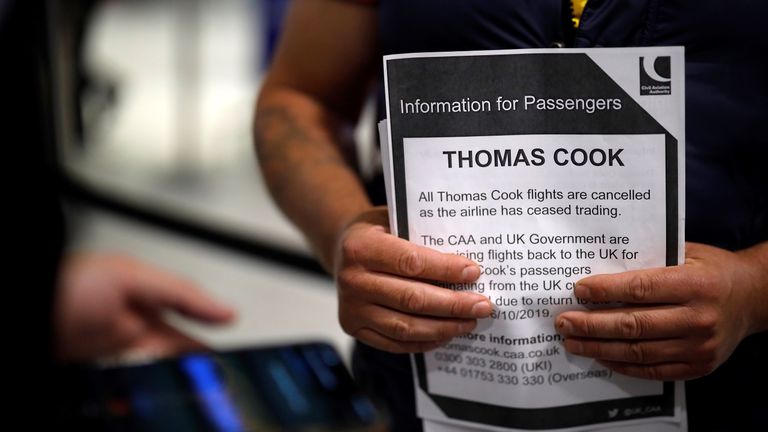 Passengers had been really kind to us recently and made us cry a couple of times because they were so sincere.

They would come up to us and say “Oh my god, I’m so sorry for you, hope it all works out”.

When they were getting off the plane, they were giving us a hug and a kiss and saying “Hope to see you on the return flight”.

They were asking, “How come you are so upbeat?” and I said “It’s business as usual”.

We just got on, big smiles on our faces, trying to make it the best flight they’ve ever had, and that’s what we did.

After we heard the news, I got back to the hotel in Newcastle and I sobbed and sobbed.

When I went to check out in the morning, I went to hand my key in and the receptionist said, “That’s £230. I’m sorry, you’re going to have to pay”.

I told her, “Do you know I’ve just lost my job? I was supposed to get paid on Friday. I am not getting a penny. I live on my own with my son. I have no husband.”

She didn’t do anything wrong but I burst into tears, which I don’t usually do in public.

My concern now is for the crew stuck in foreign countries. No-one is helping them. They’re being thrown out of their hotel rooms and there’s no way of them getting back.

I realise that it’s important to repatriate the passengers but what about people who have worked for the airline – who’s rescuing them?

All the other airlines are offering to sort jobs for us, which is amazing, but I’m not sure if I want to fly again. I’m that devastated.

I still love Thomas Cook and it’s just heartbreaking that it was allowed to disappear.

I feel like us crew members don’t have a voice.

I was told not to speak to the press but I won’t be silenced.