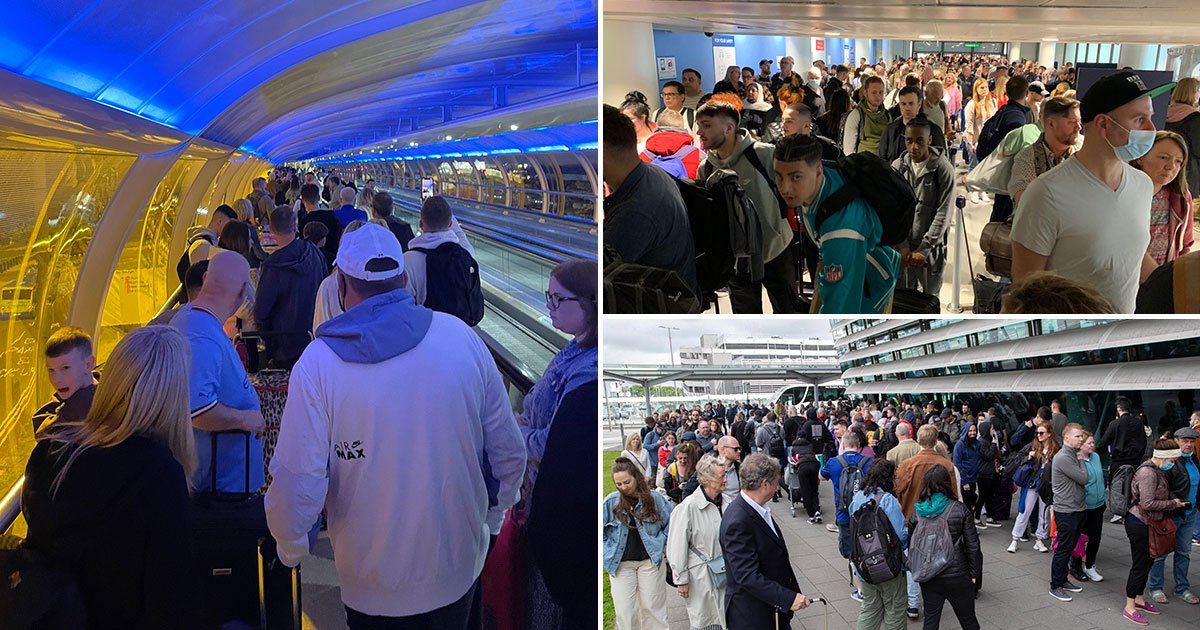 Travellers have been warned chaos at airports will continue after passengers complained of ‘nightmare’ waits of up to seven hours blighting half-term getaways.

In Manchester, passengers were delayed ‘waiting for a pilot’ for up to eight hours before finding out via text their flight had been cancelled.

Staff shortages are leading to queues as air travel bounces back from the Covid shutdown — with UK departures passing 10,000 between Thursday and yesterday, triple the total a year ago.

EasyJet blamed a software failure for a wave of cancellations that left some of its passengers stranded overseas at the weekend.

And it is axing more than 200 further flights from Gatwick — 24 a day until next Monday — over issues including baggage handling delays, runway works and air traffic control restrictions.

‘We are sorry for the late notice of some of cancellations and inconvenience caused for customers. However, we believe this is necessary to provide reliable services over this busy period,’ a company spokesman said.

There are already long queues at Bristol Airport again this morning, and a number of people have taken to social media to complain.

One person wrote: ‘@easyJet what are you paying for at @BristolAirport. Only half the security lanes open and not FastTrack. 2 hrs to get through. Queues started 300m on road outside.’

Another said: ‘Queue to get in the terminal at 5:15 at @BristolAirport. At least the sky is pretty’.

‘We’ve been sent through baggage collection with luggage thrown on the floor, now standing outside airport. No help. Poor on every level,’ she tweeted.

Tui said the cancellation was ‘due to a combination of factors’ and added: ‘We are doing all we can to keep customers updated.’

Literally every aspect of travelling to/via Dublin is in disarray. Airport is an omnishambles, when you make it through that hellscape you encounter one of the worst capital city transport links in Europe. Taxis non-existent, three star hotels charging Ritz-Carlton rates.

In Dublin, bosses last night warned of ‘significant queues’ and said that some passengers could miss flights as 50,000 were due to pass through over the next 24 hours.

Drivers have been warned to expect long waits on popular routes during the Platinum Jubilee bank holiday period.

The RAC estimate 19.5 million leisure trips by road will take place between Wednesday and Sunday.

A survey of 1,460 drivers’ travel plans indicated that Friday is likely to be the most congested day on the roads as day-trippers combine with families returning home from half-term breaks.

The M25 anticlockwise from Junction 17 at Maple Cross Interchange, Hertfordshire to Junction 12 at Thorpe Interchange, Surrey has been highlighted as a likely congestion hotspot.

Another is the A303 running past Stonehenge, Wiltshire, which is a popular route for holidaymakers travelling towards the South West.