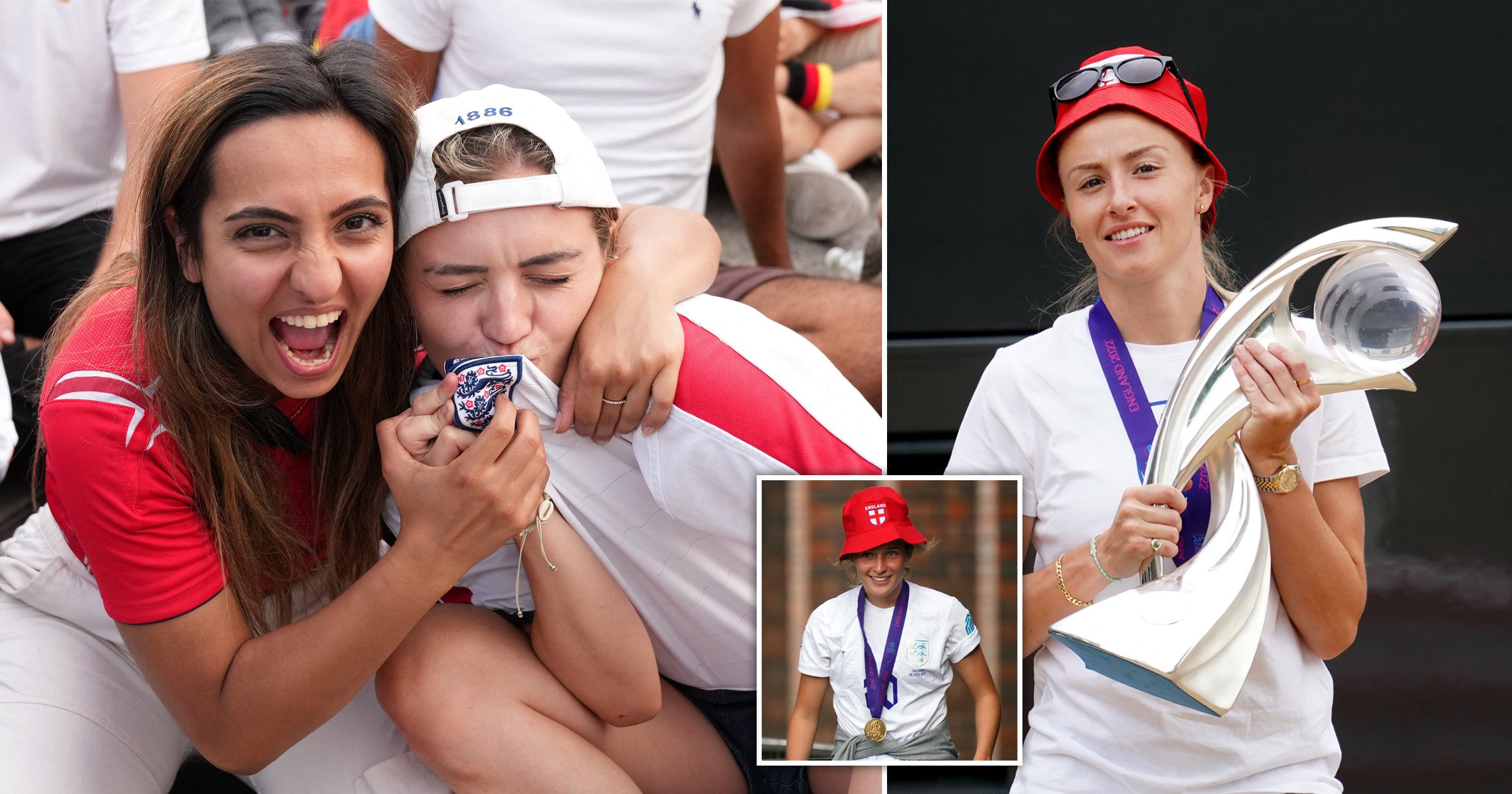 Germany were beaten 2-1 in yesterday’s nail-biting game, which was watched by a record 87,192 fans at Wembley.

The victory also marked the first time an England team has ever won the European Championships.

This morning, various players were seen leaving their hotels in preparations for huge celebrations in London today.

Many still wore their winning gold medals as they beamed for cameras.

Head coach Sarina Wiegman, who has only headed up the squad for less than a year, was also pictured waving to photographers.

Up to 7,000 supporters are expected to gather at an event hosted by ex-player Alex Scott in Trafalgar Square from 11am.

Thousands, many draped in England flags and wearing replica shirts, have queued since early this morning to save a spot near the Lionesses’ victory lap.

Among them was Chris North, 52, who said it was ‘amazing’ to be able to celebrate the victory with his two children.

‘My wife’s an ex-women’s rugby player so we always had women’s sport in our family, but they were so inspiring last night,’ he said.

He said his six-year-old daughter is excited to see her ‘new role models’.

Some Scottish fans have joined those at the fanzone in Trafalgar Square.

Morag Scargill, 58, from Kilmarnock, and Sara Turkington, 39, from Prestwick, travelled down from Ayrshire to watch the final.

Ms Turkington said: ‘In terms of the women’s game, it can be huge. Especially in Scotland, where we would love to see an improvement.”

Ms Scargill said that the pair were supporting England despite the rivalry between Scotland and their neighbours.

She said: ‘We’re women’s football fans. (The match) was fantastic. You had to be there to experience it.’

Last night’s final attracted a peak TV audience of 17.4 million, a record for a women’s football match in the UK, according to overnight ratings released by the BBC.

The previous record was set during England’s 2019 World Cup semi-final defeat by the United States, which enjoyed a peak audience of 11.7 million.

Scott, a former England international, said the Lionesses’ win will be a game-changer in terms of raising the profile of women’s football.

She told BBC Breakfast: ‘These Lionesses have raised the bar.

‘They have changed the way women’s football is viewed in this country.

‘The train has left the station and it is gathering pace.

‘It will be tragic to take any steps back after what we have witnessed yesterday and through the whole tournament.

‘There must be an opportunity for every single girl to play football if they want to.’

‘The last few years have been incredible. We have invested really heavily and the Lionesses have taken their opportunity and they have produced something incredible.

‘It’s been an amazing month and an amazing day yesterday,” he told BBC Breakfast.

‘I think it will really turbo charge everything we have been doing in the women’s game.

‘There is no reason why we shouldn’t have the same number of girls playing as boys and it will inspire a whole new generation of players.’