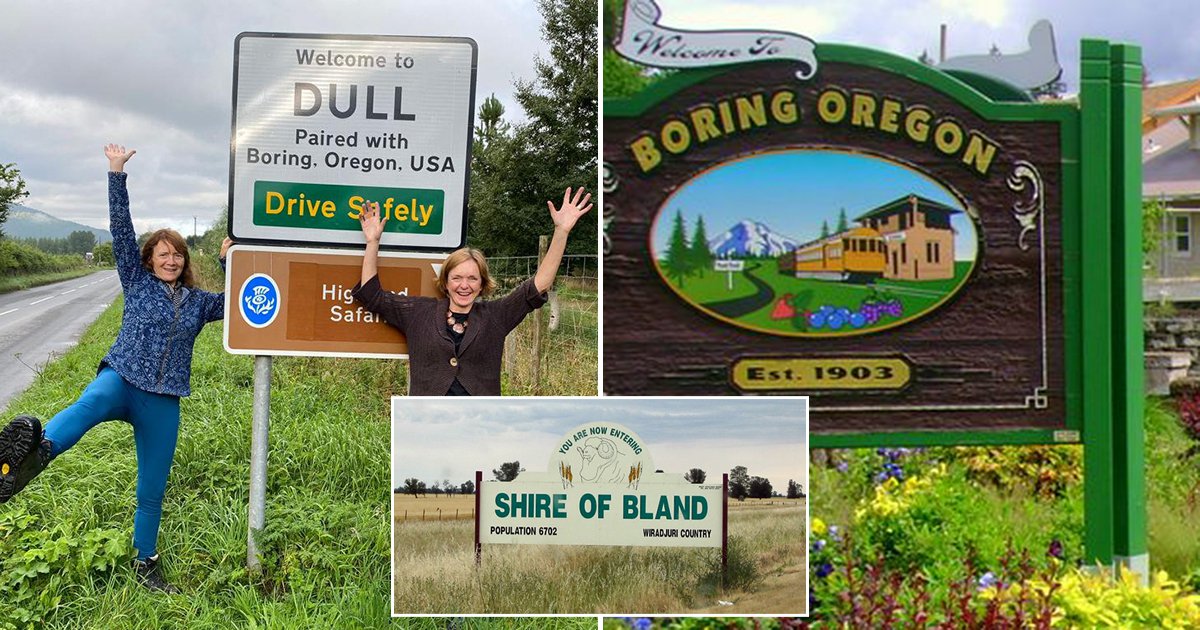 The union of three areas named ‘Dull’, Boring’ and ‘Bland’ has apparently made things much more exciting for locals.

Dull, a village in Perthshire, Scotland was paired with the town of Boring in Oregon, US in 2012.

Five years later, people in a town called Bland in New South Wales, Australia, decided they wanted in on the act.

Ever since then, they have been informally known as the ‘Trinity of Tedium’.

Some would argue the places – all quiet and rural – stand up to their names.

But the woman who came up with the idea to link Dull and Boring says the pairing has brought a ‘flash of excitement’ ten years on.

Elizabeth Leighton, 62, was going through Boring on a cycling trip when she realised how amusingly similar the name was to her friend’s hometown in America.

Locals in Dull, which has a population of just 85, then jumped at the idea to twin with Boring, which is slightly bigger with 8,000 residents.

Tourists travelled between the two to celebrate the match, which is now marked every year on August 9.

Other US towns like Dreary and Ordinary have been touted as potential members of the group.

Describing her great idea, Elizabeth, from Aberfeldy, said: ‘I saw the sign so pinged my friend who was living in Dull a message saying, “isn’t this amazing I’m in Boring and you are in Dull”.

‘She thought it was great and the community council and the locals jumped on the idea as something fun.

‘It’s been great for the Dull over the last ten years. They are both quite rural places and do have similarities. Boring is bigger, but that doesn’t make it more exciting.’

But she added: ‘It’s nice to have a bit of fun when life gets serious, and it’s great people want to have a laugh and a joke about the names.

‘Other places have wanted to join, but I don’t think anything official has happened yet. It’s great to make something of the pairing ten years on.’

Elizabeth’s friend Emma Burtles, 53, who used to live in Dull said she never dreamt the pairing would take off like it has.

The yoga teacher, who has since moved to Aberfeldy, said: ’It just blew up and all happened so quickly at the time.

‘Dull hasn’t changed much in a practical sense but as a community the pairing has had a really positive effect.

‘It has definitely enriched Dull, it’s a lovely place and the pairing has put it firmly on the map.’