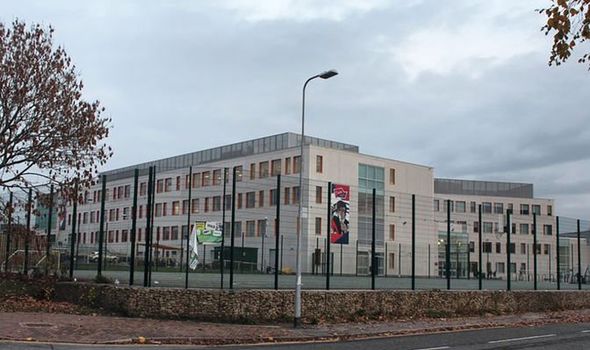 One of the teachers was rushed to hospital after the scrap yesterday at Oasis Academy at MediaCityUK in Salford, Greater Manchester. Community support officers have been on site investigating today but no one has been arrested.

It is believed a fight between two pupils escalated, resulting in a large number of students getting involved.

The staff members were hurt as they tried to stop the trouble, Manchester Evening News reports.

The school, rated as Good by Ofsted, says it is “deeply disappointed” by the actions of a number of pupils and is cooperating with the police investigation.

A spokesman for Greater Manchester Constabulary said: “Police at a school on Trafford Road, Salford, as part of ongoing engagement work were made aware of a disturbance at around 1.50pm yesterday (Thursday 23 September 2021).

“Enquiries have established that there was a fight between a group of students. Whilst dispersing the fight two staff members received minor injuries.

“No arrests have been made and enquiries are ongoing.”

“The safety and wellbeing of all our students and staff is of top priority and we acted quickly to make the situation safe, and this is now being fully investigated as per our robust safeguarding and behaviour policies.

“Coincidentally Greater Manchester Police were at the Academy for an engagement event with some of our other students, and we appreciate their support.

“As the investigation is ongoing, and to ensure the right to privacy of those involved, we are unable to comment further at this time.”