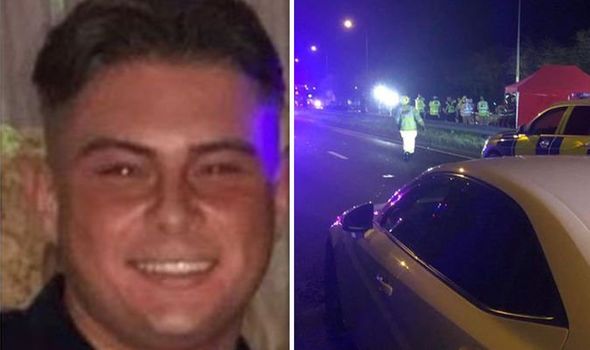 Pals Sam Connors, Willy Hart and Lawrence James were travelling in a BMW 1 series which collided with a Peugeot on the A63 in Melton, East Yorkshire, on Monday November 22 at around 10pm.  The Peugeot 3008 driver Alison Clark, aged 43, died at the scene.

Willy Harty and Lawrence James were also pronounced dead at the scene. Sam Connors was rushed to Hull Royal Infirmary in a critical condition with serious injuries and passed away on Saturday.

It is unclear why the friends, all in their early 20s, were travelling along the dual-carriageway so late. A witness, though, had reported the white BMW was speeding on the wrong side of the road and had ignored traffic lights.

It is known Humberside Police were involved in a “short pursuit” of the BMW in the events leading up to the accident, reports Hull Live.

But the fateful decision to drive the wrong way onto the A63 sealed their fate and led to the death of Mrs Clark who had been travelling home from a supermarket shop to her husband and daughter.

Balloons were released and flares and fireworks set off as friends and family of the young men gathered yesterday.

Online tributes were made to Sam Connor. One said: “You will be missed by everyone who knew you. You put up a fight, sleep tight. Thinking of all his family at this sad time. Heartbroken over him, why you Sammy boy.”

Another wrote: “RIP to one of the nicest men and a good friend of mine, was a gentleman of a man, can’t believe it you’re gone cuz. RIP big Sam Connors No.1.”

One mourner said: “Breaks my heart to even write this, RIP Sam Connors you really was the best, a heart of gold, you fought until the end. Until we meet again.”

They had lived in various locations in West Yorkshire, including Leeds.

Confirming the fourth death from the crash, a Humberside Police spokeswoman said: “Following a collision between two cars on the A63 on November 22, a fourth person has now died from their injuries.

“The collision claimed the life of the driver of a Peugeot 3008, Alison Clark from Elloughton, who died at the scene.

“Two men, who were occupants of a second vehicle, a BMW 1 series, also died at the scene last Monday night.

“On Saturday, November 27, a man who was travelling in the BMW passed away in hospital from his injuries.”

Humberside Police has said it is now working with the Independent Office for Police Conduct (IOPC) due to its involvement in the events leading up to the accident.