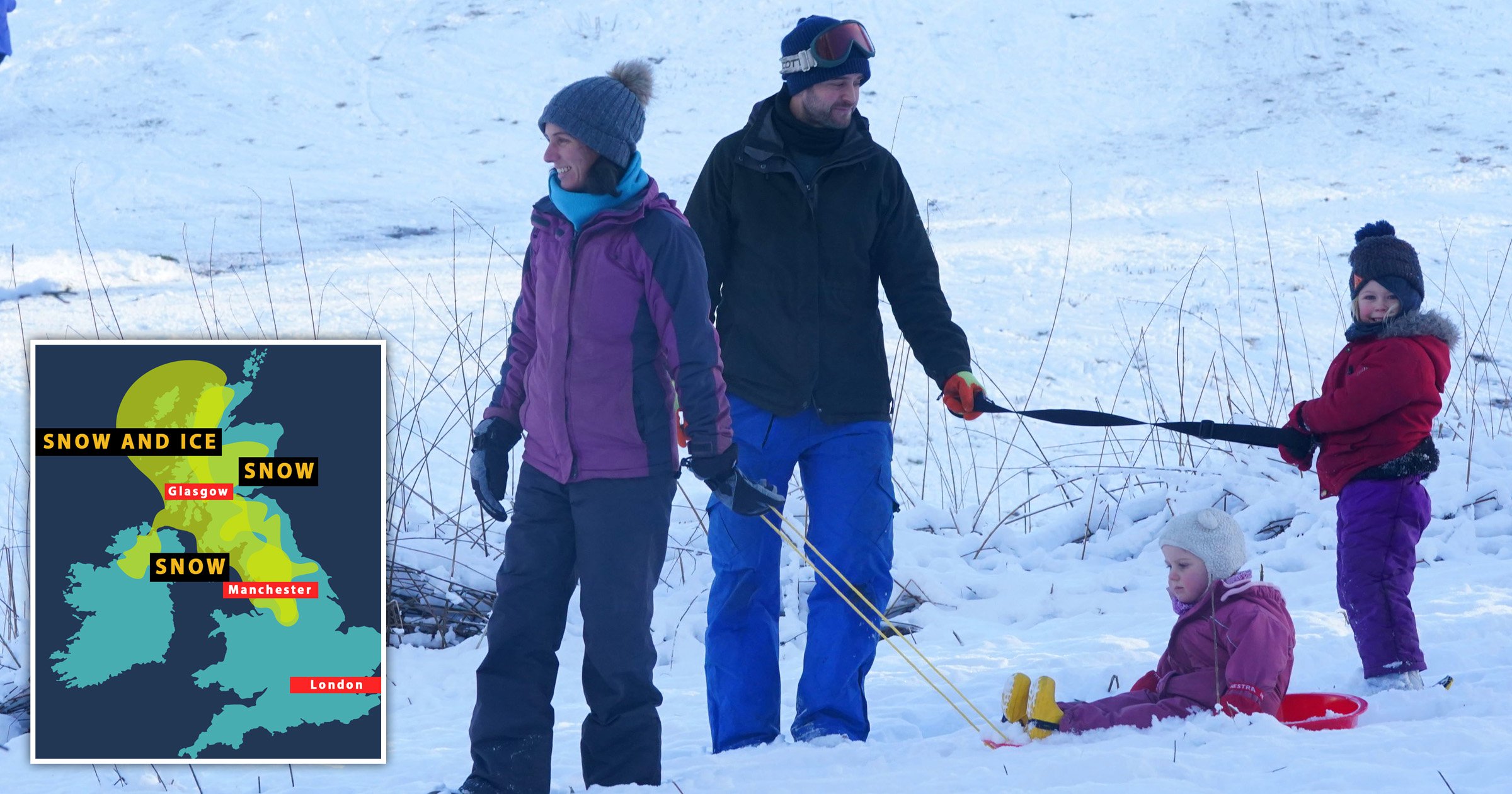 Parts of the UK are bracing for ‘thundersnow’ with showers and lightening strikes expected to knock homes off the power grid.

The Met Office has warned of dangerous weather conditions over the next two days, when as much as 10cm of snow could falling on the highest ground.

There is also a risk of dangerous icy patches and of lightning strikes from isolated thunderstorms, according to forecasters.

A yellow weather warning for snow and ice has been issued covering most of Scotland and Northern England.

The alert is set to be in place at 8pm on Thursday until 11am on Friday and stretches along Glasgow, the east of Scotland and into the north of England beyond Manchester to Staffordshire in the West Midlands.

The Met Office has warned of the potential of power supplies being knocked out by lightning strikes.

It has also issued a separate snow warning beginning earlier on Thursday, which stretches from the Highlands, through Glasgow and Edinburgh, and into the north of England, and warned of disruption to roads.

It said many areas would see one to two hours of snow, with a risk of temporary slushy accumulations above 100-150m, leading to difficult travel conditions.

On higher routes, forecasters have predicted strong winds could lead to drifting and temporary blizzard conditions.

Grahame Madge, spokesman at the Met Office, said: ‘We have got an area of high pressure across the UK, that will remain in situ until the early hours of tomorrow morning. Then we will start to see the weather front coming in.

‘As conditions get cold tonight, we’re seeing temperatures drop down to freezing quite widely.

‘As we get the cold air, that will bring the temperatures right down, we’ve got the weather front coming in from the west and that moisture is going to bump into the cold air and where you get that you will get snow.’

The forecaster added that the prospect of thundersnow was driven by the same conditions which cause thunder in the summer – the difference in temperature between the ground and the air surrounding it.

However rather than hail or rain falling alongside the thunder, snow will be the primary precipitation.

Mr Madge said: ‘Because you have got that differential it’s possible, quite easily, for warm air at ground level when it heats up to start to rise very quickly up through the cold air and that’s what creates the potential for thunderstorms, so we are likely to see along with the other wintery showers, likely to see hail and snow.

As winter begins to bite after a record-breaking mild new year, in the early hours of Thursday temperatures could feel as cold as -4C in Glasgow while in Edinburgh the Met Office has said commuters would face temperatures as low as -3C.

In Braemar, Aberdeenshire, the mercury could plunge to -8C in the early hours, and when the wind is taken into account it could feel as cold as -11C.

In Inverness, the northernmost city in the country, temperatures will feel as low as -4C and it will remain bitterly cold throughout Thursday.

In advance of the freezing temperatures, Traffic Scotland has urged people to drive with care because of the risk of ice.

Winds of 80mph and ‘blizzard conditions’ on Tuesday brought an abrupt end to the ‘exceptionally mild spell’ which saw the warmest New Year’s Day on record.

Villages in the Scottish Highlands saw the coldest conditions with the mercury dipping to-6°C overnight, but temperatures also fell as low as -2°C in parts of England.

Wednesday got off to a frosty start as ice patches formed across the country following the freezing night.

The Met Office said the icey stretches were caused by showers falling on to sub-zero surfaces as it urged drivers to take care on the roads.

A yellow ice warning was issued covering theMidlands, North West England and Wales lasting until 10am this morning.

Showers and snow are expected to continue today in hilly parts of Wales, Scotland and Northern Ireland.

Temperatures will be below average, peaking at 7°C in London, 6°C in Manchester, 4°C further north in Newcastle and 3°C in parts of Scotland.

But Met Office forecaster Alex Deakin said that ‘for the vast majority, Wednesday is looking like a bright winter’s day with plenty of sunny spells’.

However, things will take a turn for the worse this evening, when a ‘widespread frost’ will sink in once again, sending temperatures plummeting below freezing and as low as -6°C in rural areas.

The wintry weather has led health officials urning people to check in on their vulnerable relatives and neighbours.

Agostinho Sousa, a Consultant in Public Health Medicine at UKHSA, said: ‘Cold weather can have a serious impact on health, particularly for older people and those with heart and lung problems, as it increases the risks of heart attacks, strokes and chest infections.

‘It’s important to check on those who are more vulnerable to cold weather, including older neighbours or relatives – especially those living alone or those who have serious illness.

‘Remind them to heat their home to at least 18C, 64.4F and to keep up to date with the forecast.’