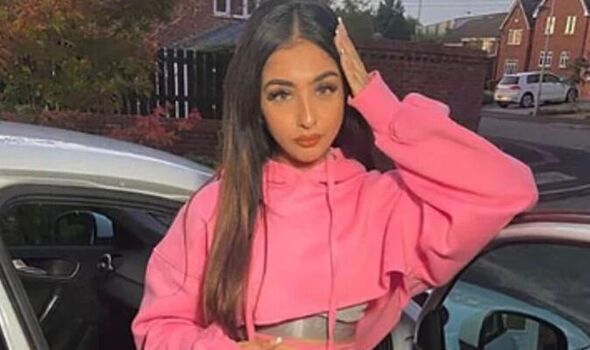 A TikTok star on trial for the murder of her mother’s lover told the jury she was “broken” after discovering her affair with a much younger man. Mahek Bukhari, 23, is one of eight defendants accused of murdering two men, one of whom, Saqib Hussain, 21, had a two-year relationship with Bukhari’s mother Ansreen but then tried to blackmail her with a sex tape after she broke up with him.

Mr Hussain and his friend Mohammed Hashim Ijazuddin, 21, died in a fireball after their car was pursued by two other vehicles in February this year.

The prosecution at Leicester Crown Court claimed Bukhari and her mother, as well as six other defendants, had lured the two men into a trap that resulted in them being “rammed off the roads”.

The jury heard the distressing 999 call made by Mr Hussain in which he told an operator he was being boxed in by two cars that were trying to ram him off the road.

The call recorded the final few moments of his life, with Mr Hussain begging the operator to send an officer.

He pleaded: “They’re right behind. They’re hitting into the back of the car very fast. Please I’m begging you, I’m going to die.”

He screamed before a loud crash was heard.

Fashion student Bukhari faced the jury for the first time today, as she claimed Mr Hussain had been “harassing” her on social media towards the end of 2021.

She said he posted a photo of a woman’s naked body with her own head photoshopped on.

“He posted it on TikTok,” she said. “That was sent around the world, globally. Two pictures were posted, one of them was my face. It was the same naked body but with different faces on.”

She told the court: “I didn’t show my mum. It was fake. I was embarrassed. It was ruining my reputation. I posted it on my Instagram and told my followers to report the post and block the account.”

She said Mr Hussain then began “posting and commenting on my live videos saying ‘Your mum is having an affair’. He was doing it to try and get my attention.”

She asked her mother who initially denied it, but when she pointed out that Mr Hussain had mentioned he had “sexual images” of her mother, “then she admitted it to me.”

Bukhari told the court: “She told me about the relationship and wanted to end it and get on with my life. Before she had made a mistake and felt really bad about it. It broke me finding that out because she loves my dad.”

Speaking about her family and the affair, she added: “I just wasn’t accepting it. I was just broken. I have always had a perfect family. We are such a small family and my dad loves my mum so much. Questions were going around my head – ‘Why did you do what you did?'”

She said the threat of exposure severely affected her mother, who worked for the Department of Work and Pensions.

“My mum was crying everyday. We worked at home at the time. I would get her breakfast. She would tell me ‘I can’t do this anymore. I can’t do this anymore’.” She said they considered getting a restraining order on him, but her mother didn’t want police involved as it would alert her father to the affair.