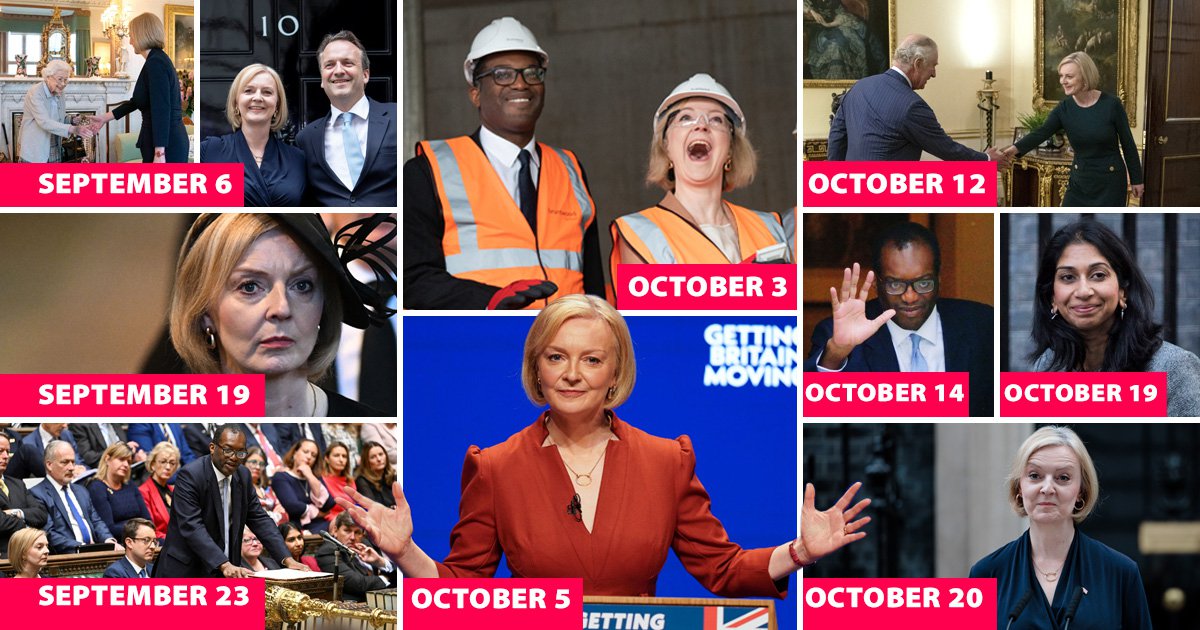 Liz Truss will become the shortest-serving British prime minister of all time.

She may have only been in office for 44 days before resigning in a speech lasting barely a minute and a half, but she has certainly had an eventful premiership.

Here is a look back at everything that has happened in the last six weeks.

Ms Truss beats her rivals and promises a ‘bold plan’ to grow the economy.

The new Tory leader becomes the last prime minister to be welcomed as the leader of the country by the late Queen.

This is also the day Ms Truss appoints Kwasi Kwarteng as chancellor.

Ms Truss reveals her long-awaited plans for how to get the UK through the energy crisis.

She promises bills will not go past £2,500, on average, but has to rush out of the Commons when the news breaks about the Queen’s health deteriorating.

The new monarch holds his first in-person audience with the PM at Buckingham Palace.

Liz Truss has stepped down as Conservative Party leader and UK Prime Minister after just 44 days. So what happens next?

– Liz Truss’ speech in full after resigning as Prime Minister

– Will the new Prime Minister be elected by the public?

– Boris Johnson and Rishi Sunak to go head to head

– Pound rises against the dollar after Liz Truss resigns

Politics all but comes to a halt as the country observed a national period of mourning.

Ms Truss delivers a reading at the Queen’s funeral at Westminster Abbey in London.

Mr Kwarteng unveils his and Ms Truss’s mini-Budget, delivering the biggest round of tax cuts in half a century.

The financial markets react with horror and the value of the pound was sent plummeting.

The value of the pound against the US dollar plunges to almost $1.03 as economic turmoil from the budget continued.

By this point, Ms Truss has vehemently stuck to her financial policies, despite acknowledging some mistakes.

In a screeching U-turn, Ms Truss and Mr Kwarteng abandon their plan to abolish the 45p rate of tax for top earners – less than 24 hours after the PM insisted she remained ‘absolutely committed’ to it.

Ms Truss delivers her first Tory Party conference speech as leader, pledging to ‘get us through the tempest’.

Mr Kwarteng had originally said his medium-term fiscal plan and independent economic forecasts would be published on November 23.

But, on this day, he bows to pressure to bring this date forward and says he would unveil his plans on October 31.

A viral clip of Ms Truss meeting with King Charles is filmed.

His Majesty could be heard saying ‘oh dear, oh dear’ as she entered the room.

Mr Kwarteng is sacked and replaced with Jeremy Hunt.

Another U-turn is also announced, as the PM said she would no longer abandon a planned rise in corporation tax.

Former minister Crispin Blunt becomes the first Tory MP to publicly call for Ms Truss to quit, saying the ‘game is up’.

Mr Hunt shreds most of the PM’s economic platform.

Ms Truss sits silently in the Commons for roughly 30 minutes as her chancellor outlines further U-turns.

Later, in a BBC interview, she apologises for her ‘mistakes’ but vowed to lead the Tories into the next general election.

The PM declares she is a ‘fighter, not a quitter’ at PMQs.

Suella Braverman dramatically quits as home secretary and a Commons vote on fracking descends into farce amid confusion over whether it is a confidence vote in the government.

In the morning, cabinet minister Anne-Marie Trevelyan says she believes ‘at the moment’ it is ‘still the case’ Ms Truss will fight the next election as PM.

But by lunchtime the list of Tory MPs calling on her to quit rises and she announces her resignation at just after 1.30pm.