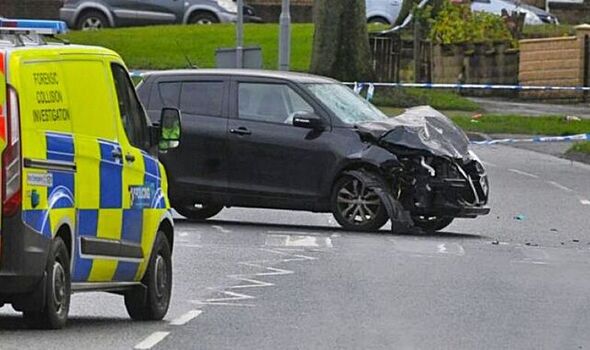 A car driven by James Celaire, 25, who probably briefly fell asleep at the wheel, struck a mother and her two sons, four and six, as they waited at a zebra crossing on their way to school.

Another woman who had just dropped her daughter at school was hit and flung into a tree, Bradford Crown Court was told.

One woman later had a leg amputated and the other victims suffered serious fractures.

Celaire was jailed for two years and four months on Wednesday after admitting four offences of causing serious injury by dangerous driving.

He told police he should not have driven home from Bradford Royal Infirmary, as his “eyes were going”.

His barrister Sarah Barlow told the court it was “overwhelmingly likely” he fell asleep briefly when his Suzuki Swift left a line of cars and accelerated on the wrong side of the road in Bradford, West Yorkshire, in December 2020.

Celaire’s car finally stopped when it hit a lamppost. Ms Barlow said the medic, of Holbeck, Leeds, was “deeply and genuinely horrified”. She added he had always worked to care for people, “mitigating harm rather than causing it”.

In a victim statement, the woman who lost a leg, said: “This accident has turned my life upside down. I don’t want my children to think they will have to look after me when they get older. I’ve not only lost my leg but my dreams, hopes and desires.”

She said she had sought psychiatric help, rarely left the house and was not sure if she could ever work again. Her six-year-old, who had a fractured skull and left leg, and his younger brother, who had a broken left shin, may need further operations, the court heard.

The second woman suffered a ­broken leg and shoulder injuries, the court was told.

Jailing Celaire, Judge Jonathon Rose accepted his character had been exemplary and he was genuinely remorseful. But he said the offences were “very grave” and had caused “catastrophic” injuries.