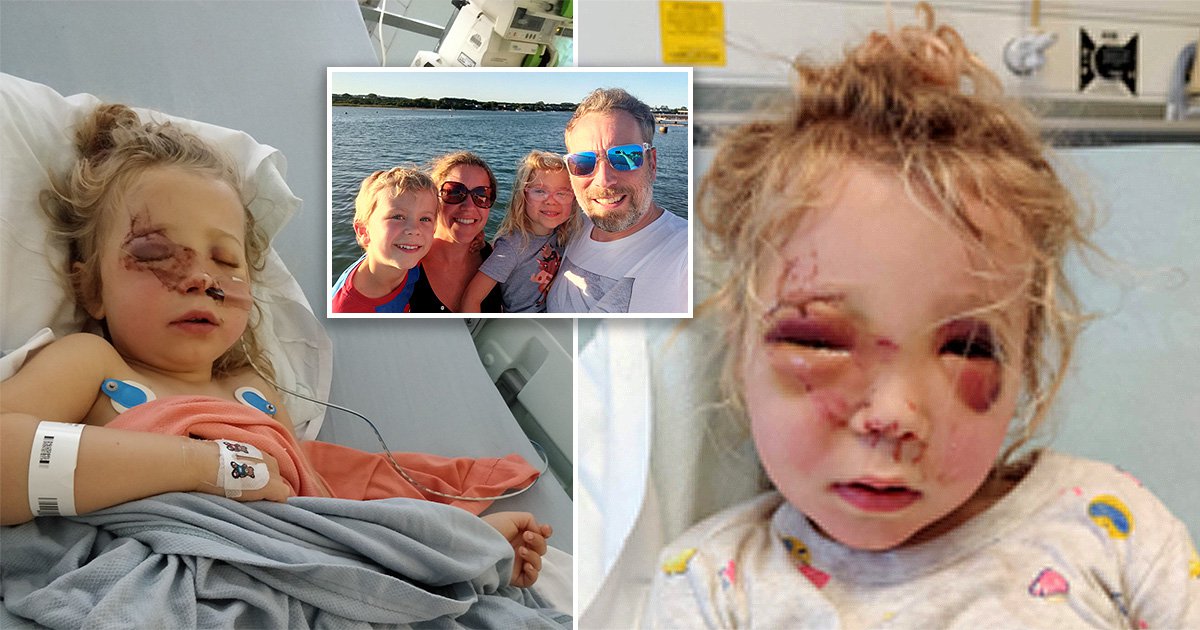 A toddler was left fighting for life after a horse kicked her in the head during a freak accident.

Madison Roome, two, fell unconscious after receiving the full force of the animal’s hoof in her face.

The split-second incident happened as the horse was being led down a bridleway at the end of her family’s road in Claygate, Surrey.

Madison has since gone under the knife numerous times after she was injured in May last year, while walking with her dad Alistair, brother Finnley, four, and some friends.

Alistair, 46, told how he felt ‘utter panic’ and the ‘feeling of not knowing what to do.

‘I was seeing to Finn, he’d scraped his knee and it was bleeding, the next thing I heard was our friend shouting, “Madi’s been kicked”,’ he said.

‘I heard those words I saw her face, the blood pouring from her eyes, her mouth and huge cut on her head lying there unconscious; it was just awful.’

He added: ‘It all happened in a split second, the next thing I heard was “I can’t feel a pulse” when I was speaking to the 999 operators. It happened in a flash.’

Mum Jennifer, 36, frantically rushed to be by her daughter’s side.

‘I was shocked when I first saw Madi’s facial injuries and the blood, but I knew that I had to remain calm for our baby girl.

‘I cradled her in my arms, while we waited for help to arrive, she was wearing an Anna dress from the movie Frozen.

‘That image will never leave me.’

Madison regained consciousness quickly but medics were concerned because she had such extensive injuries, Jennifer said.

Alistair, a web developer, added: ‘When we got into the helicopter and the rotary blades began, Madi began to scream, we thought it must be because of the vibrations hurting her face.

‘The crew were amazing and once we had got her settled, she spent the rest of the flight looking out of the window.’

Brave Madison had emergency surgery to repair a cut above her right eye and fix her pallet, which had split along the middle and separated from her skull.

Doctors also stitched and secured a brace in her mouth to help keep her bite and ensure the lining of her teeth stayed in place.

The maxillofacial surgeons who carried out her operations plan to publish documentation of Madi’s ground-breaking and unique case in a medical journal.

She is now a ‘really happy, resilient four-year-old’, her dad said, adding: ‘We’re so proud of her’.

‘Madi still has a long road ahead and is likely to have many surgeries until her face is fully grown,’ Alistair said.

‘It’s now been over a year since that horrific day, and I’m so pleased to say Madi is recovering really well.

The family are now raising money for the Air Ambulance charity and want to highlight Air Ambulance Week which begins on Monday, September 6.

This year’s campaign shares the vital message that Every Second Counts and Every Penny Matters when saving the lives of people with a sudden life-threatening injury or medical emergency.