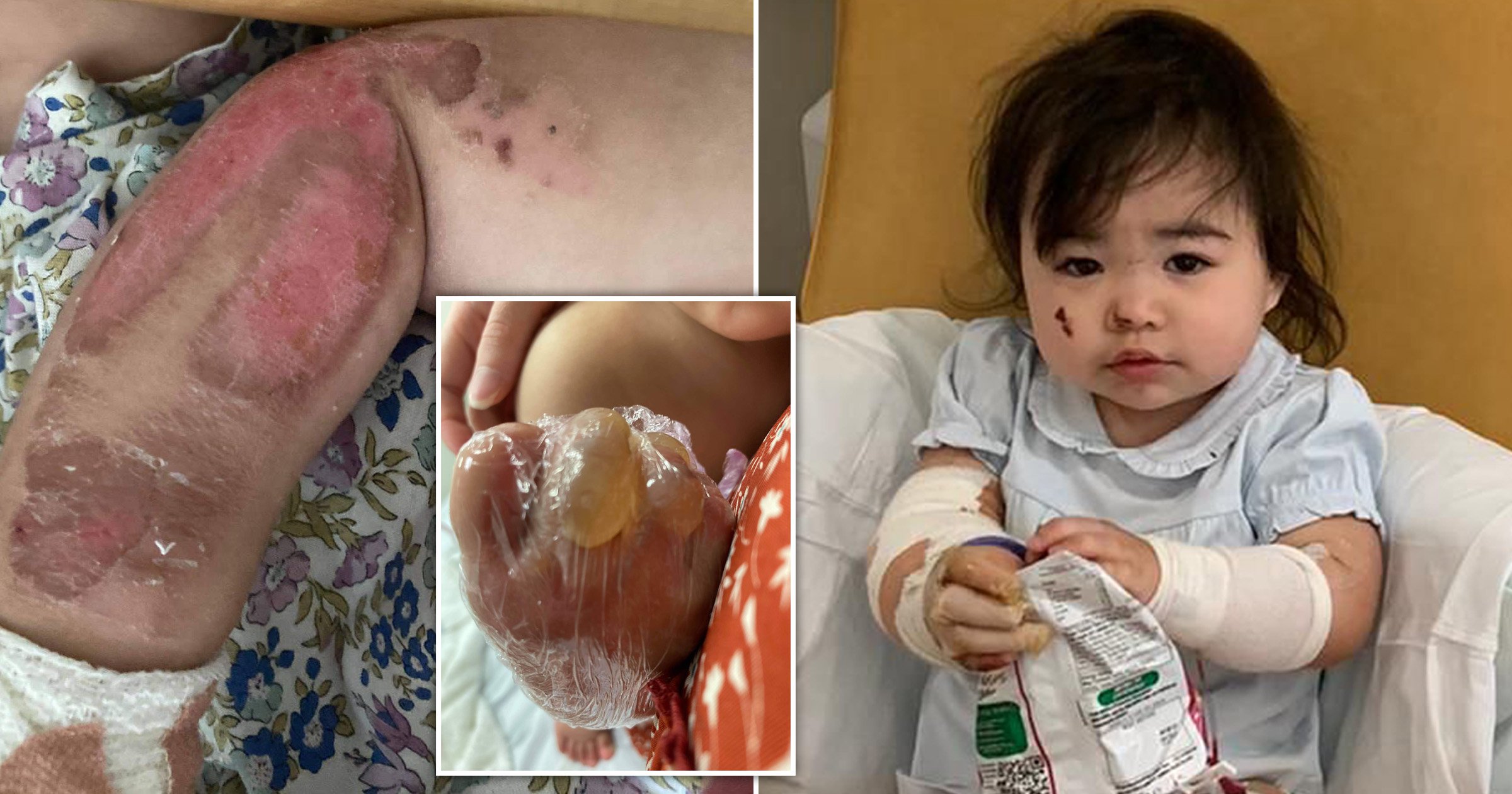 A 18-month-old girl suffered horrendous burns to her face, fingers, arm and legs after spilling piping hot KFC gravy on herself.

Ella Pau let out a bloodcurdling scream after the lid of the pot flipped back at her after she grabbed it from a takeaway bag at home.

Her legs started to ‘bubble’ as hot oil stuck to her skin, and she now has to use special cream three times a day for scars that have been left behind.

Her mum, Jade, 23, picked her up and took her straight to the bathroom for a cold shower.

Ella was then rushed to A&E at Liverpool’s Alder Hey Children’s Hospital and taken straight to the burns unit and given a cold bath.

She was sent home the following day after spending the night and seemed fine at first.

But later she went into toxic shock and had to go back – spending a total of six days in hospital.

Jade told the Liverpool Echo: ’I felt her head and she was roasting hot and then she turned slightly and I could see her back was full of sweat.’

Ella’s mum checked her temperature and it was 39.8°C and decided to wake her up as she was ‘breathing funny’.

The tot started vomiting as she was picked up, so she was taken back to the same hospital and put on an antibiotic IV drip.

Jade says a friend of hers was staying over for a few days and had gone to pick up their KFC meal from a drive thru at around 5pm on June 1.

She says she would have expected the gravy to have cooled down a bit more by the time she drove back to the home.

Jade says the accident ‘just happened so quick’ as her three-year-old twins Jacob and Anthony and Ella went to grab food from the bag.

Reliving the moment her youngest grabbed the gravy pot, she said: ‘Before I knew it, it was all down her.

‘It was all over her arms, mainly her right arm, and because she was on the couch it pooled between her legs.’

Jade said she has never heard screams like Ella’s in her life and recalls her horror as the hot oil remained stuck to her skin in the shower.

She says she was undressing her daughter as she showered her and saw her legs had ‘started to bubble’.

Ella has been left ‘scarred for life’ by the incident and has only just brought herself to be able to eat hot food again, her mum says.

Since the accident, in Liverpool’s Norris Green area, Jade has visited the restaurant and has been in touch with KFC in a bid to stop people suffering the same fate.

Jade told them she’d like them to ‘assess the temperature that they’ve got the gravy at’ and to stop the pots from opening so easily.

A KFC spokesperson said: ‘Safety is our top priority for our guests, so we’re really sorry to hear about this and we’re in touch with Jade and Ella to fully understand how this happened and help make it right.’