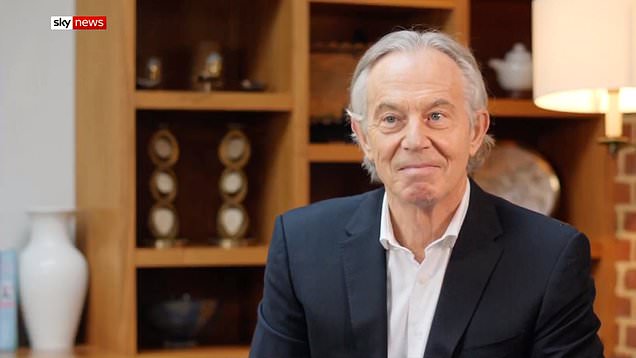 Tony Blair has criticised the European Union’s short-lived move to override the Brexit deal on Northern Ireland under its vaccine export controls as a ‘very foolish’ move that jeopardised the peace process.

The former prime minister, a vocal supporter of the UK remaining in the bloc, said Brussels’ action in triggering Article 16 of the Northern Ireland Protocol to control the movement of coronavirus jabs had been ‘unacceptable’.

The EU backtracked on the move, imposed unilaterally as it faces shortfalls on vaccine supplies, after facing universal criticism from London, Dublin and Belfast.

Asked if the move was irresponsible, the Labour grandee told Sky’s Sophy Ridge on Sunday: ‘Yes, it was a very foolish thing to do and fortunately they withdrew it very quickly.

‘I was somebody who negotiated the Good Friday Agreement, it’s brought peace to the island of Ireland and it is absolutely vital that we protect it and that’s why what the European Commission did was unacceptable but, as you say, fortunately they withdrew it very quickly.’

Ministers have also expressed confidence that the EU will not block vaccines entering the UK, after the two sides agreed to a ‘reset’ in relations to de-escalate tensions.

Cabinet Office minister Michael Gove said the EU recognises it ‘made a mistake’ in its short-lived but widely-condemned move.

Foreign Secretary Dominic Raab said he was ‘reassured the EU has no desire to block suppliers fulfilling contracts for vaccine distribution to the UK’ after talks with European Commission executive vice-president Valdis Dombrovskis.

A compromise was struck to prevent a possible hard border with the Republic of Ireland after a flurry of diplomacy followed the EU’s surprise move to trigger Article 16 of the Northern Ireland Protocol.

The U-turn came after Brussels installed export controls and demanded British-manufactured AstraZeneca jabs, as the bloc is embroiled in a row over shortages from pharmaceutical giant AstraZeneca.

Mr Gove welcomed the EU having ‘stepped back’ from triggering the article, which Northern Ireland’s First Minister Arlene Foster described as an ‘incredible act of hostility’.

‘I think the European Union recognises that they made a mistake in triggering Article 16, which would have meant the re-imposition of a border on the island of Ireland,’ he told reporters.

‘I’ve spoken to the European Commission vice-president Maros Sefcovic about this and we both agreed that we need a reset, that we need to put the people of Northern Ireland first.’

The Cabinet minister said that the Government was ‘confident that we can proceed with our vaccine programmes exactly as planned’ after discussions between Mr Johnson and Ms von der Leyen.

It was understood vaccines crossing between the Republic and Northern Ireland will now be recorded in Dublin but will not be at risk of being blocked.

Despite criticism from the World Health Organisation, the EU is pushing ahead with imposing controls on vaccines manufactured within member states.