BRUSSELS — On paper, Ursula von der Leyen is uniquely qualified to lead the European Union through the coronavirus crisis. A medical doctor with a masters in public health, the president of the European Commission has the backing of her native Germany as well as France, a powerful combination that catapulted her to the vaunted role less than two years ago.

But her handling of a growing crisis over vaccine supply shortages to the European Union, which culminated in a major gaffe that threatened to upend delicate relations with Britain, a former member of the bloc, has shaken her steely image and pitted senior bureaucrats — the very people she depends on — against her.

After a bumpy start in the coronavirus response, Ms. von der Leyen secured a major win in June, placing the bureaucracy she leads at the heart of the collective E.U. pandemic response. She was entrusted with cutting deals with pharmaceutical companies to provide vaccines for the 450 million people living in the bloc.

Despite lagging the United States and Britain in sealing those agreements, and a slow authorization process by the E.U. regulator, the rollout was finally launched just after Christmas.

A sense of relief took hold in Brussels: the work of the commission, the European Union’s executive branch, was largely done; now individual member states were in charge of actually putting the vaccines in the arms of their own citizens.

But barely a month into the vaccine rollout, which was shaping up to be dramatically behind Britain and the United States, Pfizer and then AstraZeneca informed the commission they would not deliver doses as promised mainly because of production problems.

While the issue with Pfizer appeared limited and manageable, the situation with AstraZeneca swiftly escalated into an all-out vaccine war between the European Union and Britain. It transpired that the company had been smoothly delivering vaccines to Britain, just as it informed the bloc that it would slash 75 percent off its promised first-quarter delivery volumes, upending immunization planning across the 27 member states.

By mid-last week, Ms. von der Leyen, who had not made any public statements on the matter, had left her health commissioner, Stella Kyriakides of Cyprus, alone to face the press. 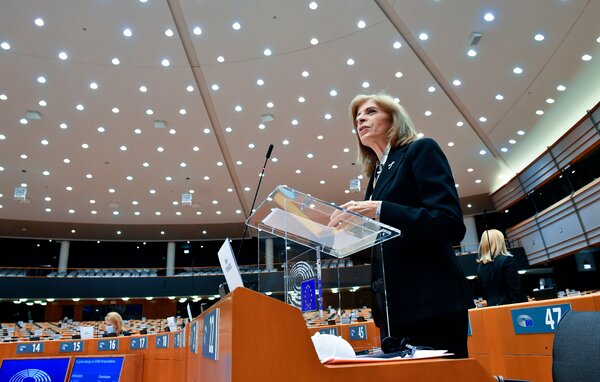 Later in the week, the commission rolled out a half-baked policy requiring prior authorization for exports of vaccines made in the European Union, so that it could check that companies like Pfizer and AstraZeneca were not sending vaccines promised the bloc overseas.

The move was met with panic and incredulity. Critics accused the European Union, which spent years criticizing the Trump administration for erecting trade barriers, of doing the same. And Brexit supporters found fresh ammunition against the bloc, accusing it of trying to take vaccines away from Britons, whose country is in the throes of a catastrophic second wave and was finally doing a good job getting them immunized.

The idea was a brainchild of Ms. von der Leyen and her inner circle, several senior E.U. officials said. Six such officials, who spoke on condition of anonymity because they did not want to publicly criticize Ms. von der Leyen, said that the president had solely relied, per her habit, on an extremely small subgroup of advisers, excluding from deliberations not only expert staff, but even some of her senior cabinet members.

And when it came to presenting the policy to the public, Ms. von der Leyen sent out Ms. Kyriakides, the health commissioner, and Valdis Dombrovskis, a commission vice president who handles several economy issues, including trade.

On Friday night, as the legal text of the hastily assembled policy was published, reporters noticed it made provisions for the European Union to activate a nuclear clause in the divorce terms with Britain, known as Article 16 of the Northern Ireland Protocol, which practically reinstitutes a hard border on the island of Ireland, one of the toughest points the bloc had to smooth over with Britain.

The idea was that activating that clause would close a loophole for Britain to spirit away E.U. vaccines out of the bloc by using the lack of borders between the Republic of Ireland, an E.U. country, and Northern Ireland, which is part of the United Kingdom.

Over the weekend, Ms. von der Leyen chose to give a sole interview to German TV, compounding criticism that she narrowly focused on Germany despite her pan-European role.

The Irish commissioner for financial services, Mairead McGuinness, distanced herself from her boss, one of few people to do so publicly. “This was a mistake — other words have been used — it has had consequences,” said Ms. McGuinness, speaking to Irish media over the weekend. “We have seen very justified anger and the political fallout. Fortunately, I know it was at the 11th hour, but the mistake was rectified.”

Ms. McGuinness said she did sign off on the offending legal language late Friday, along with all the other 25 European commissioners, but several E.U. officials noted that commissioners had only been given about half an hour to review multiple pages of dense technical text and approve it late Friday. It was highly unlikely anyone would notice the invocation of the special Brexit clause unless they’d been previously warned it was there, they said.

On Sunday, a senior European parliamentarian called on Ms. von der Leyen to appear in the parliament and explain what had gone wrong.

“The commission is accountable to Parliament, and the series of very worrying incidents, gaffes and rumors in this past week, has to be clarified as a matter of urgency,” said Sophie in ‘t Veld, a Dutch deputy. “Parliament is the arena where the commission has to communicate with European citizens, not just via the German media. Inversely, it is an opportunity for VDL to eliminate any misunderstandings or false rumors,” she added, referring to Ms. von der Leyen by her initials.

But on Monday, as the episode came full circle, a spokesman for Ms. von der Leyen pointed the finger at Mr. Dombrovskis, the commission vice president for trade, for the gaffe.

“What I can tell you is that there is one cabinet which was lead on this, that is Executive Vice President Valdis Dombrovskis because he is in charge of trade,” the commission’s chief spokesman, Eric Mamer, said when asked for comment on Ms. von der Leyen’s handling of the issue.

Ms. von der Leyen agreed to appear only before groups of members of Parliament in closed-door sessions, a decision Ms. in ‘t Veld decried as “error of judgment on all sides.”

Guntram Wolff, director of the Bruegel research institute in Brussels, criticized the European Commission’s entire approach to the negotiations with pharmaceuticals, comparing it unfavorably with the U.S. program to develop, manufacture and distribute vaccines.

“The commission was quite late, risk averse, cautious and too conscious of cost,” he said, and “the funds put out — 2.7 billion euros for advance purchases in the summer, and then another 1.09 billion in September, were very small compared to the American Warp Speed outlay of $18 billion.”

In view of that, as well as events of the last week, Mr. Wolff said, an examination of what had gone wrong by the European Parliament was called for.

“To continue without that underestimates how European voters feel. There’s a lot of anger,” he said.

And Ms. von der Leyen’s decision to drive policy from the shadows with a tiny group of confidantes, while seeming to throw subordinates under the bus when things went wrong, was not judged kindly by observers, either.

“It reflects incredibly poorly on Ursula von der Leyen, she took over this portfolio and made a complete mess of it. There’s no redeeming factor in the way the commission has acted in the last couple weeks and she needs to own it,” said Jacob Funk Kirkegaard, a senior fellow of the German Marshall Fund and of the Peterson Institute in Brussels.

“The egg is on her face, and she can’t wipe it off on the health commissioner,” he added.