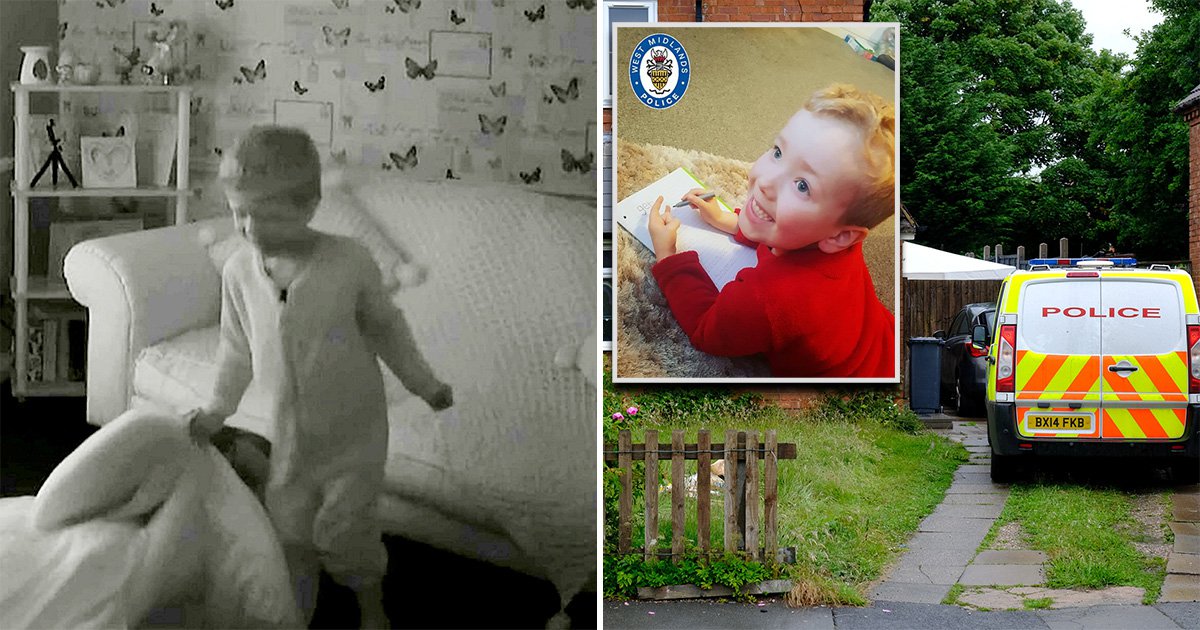 Distressing footage of a ‘starving’ six-year-old shows him crying ‘nobody loves me’ and struggling to carry a duvet hours before he was allegedly murdered by his father and stepmother.

Arthur Labinjo-Hughes struggles to move the covers after being forced to sleep in the living room for a fifth day in a row.

The video gives an insight into the final hours of Arthur’s life as he woke up on the morning of June 16 last year – the day before his death – when he was so weak and frail he could barely lift the duvet, jurors were told on Tuesday.

Thomas Hughes, 29, and Emma Tustin, 32, are accused of killing Arthur at their home in Solihull, West Midlands, after subjected him to a ‘campaign of cruelty’ that amounted to the ‘medical definition of child torture’, jurors heard.

Coventry Crown Court heard the youngster suffered an unsurvivable brain injury after having his head banged ‘repeatedly against a hard surface’ at the hands of Tustin, it is alleged.

Both deny murder and multiple count of child cruelty, though Tustin has admitted one count.

The court heard Arthur was deprived of food, made to stand for 14 hours a day and poisoned with salt before his death on June 17 last year, jurors were told.

Police have now also released harrowing audio clips of Arthur crying ‘no-one loves me’ and ‘no-one is going to feed me’, which had previously been played to the court.

Arthur’s uncle Blake Hughes told the court last month the youngster broke out in tears after claiming that Tustin had pushed him against a wall and branded him ‘ugly’.

He said: ‘He said his mum didn’t love him and had abandoned him. He then started to break out crying. He went on to say nobody loved him.’

Jurors have been told how Tustin would send Hughes voice notes of Arthur crying whenever he left the house.

Hughes would reply with messages such as ‘dig Arthur’s grave’, ‘I’ll take his neck off,’ and the ‘kid is getting it when I get back’.

He also sent texts saying that he would take his ‘c***ing jaw off his shoulders’ and told his partner ‘put him out with the rubbish’.

Earlier this week, Hughes admitted he would also use ‘pressure points on Arthur’s neck to discipline him’ after seeing videos about police brutality in the USA online.

He said he would use the pressure points for ‘about 10 to 15 seconds’ to ‘help discipline him.’

He told the court previously: ‘Neither can begin to justify what they did to him. Arthur was a defenceless child entirely dependent on them for his well-being.

‘Arthur became a target for derision, abuse and systematic cruelty designed to cause him significant physical and mental suffering for reasons which are unfathomable.’

Arthur was taken to Birmingham’s Children’s Hospital and his life support was turned off in intensive care at 1am on June 17.

Hughes expressed some remorse for his actions and admittedly he probably valued Tustin, also of Shirley, more than son.

He told the court he was ‘mentally abused’ into complying with a disciplinary routine.