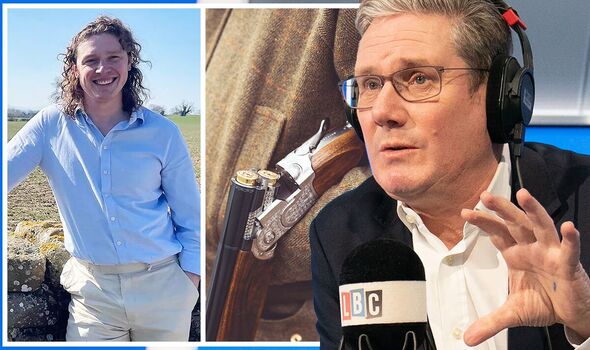 A Conservative councillor has questioned Sir Keir Starmer for what he says was a call for stricter gun laws on legal owners in the wake of a “drugs cartel” shooting. Shotgun licence holder Cllr Tom Jones said the Labour leader conflating gun law reform to a tragic incident potentially linked to the drugs trade was not a reason to “crackdown” on legitimate gun owners.

Mourners attending a memorial service for a young woman and her mother came under gunfire outside St Aloysius Church in Phoenix Road, Euston, central London, on Saturday.

A seven-year-old girl is in a stable but life-threatening condition after being shot, while a 48-year-old woman suffered a potentially life-changing injury.

Another girl, 12, was hit in the leg, and three other women, 21, 41 and 54, were also hurt. The church service was reportedly for British-Colombian cancer victim Sara Sanchez, 20, and her mother Fresia Calderon, 50.

Shotgun pellets were fired from a black Toyota C-HR at around 1.30pm on Saturday, police said, and the next day officers arrested a 22-year-old man in Barnet, north London, on suspicion of attempted murder.

Labour leader Sir Keir Starmer, MP for the area where the shooting took place, said the incident and other atrocities, like the killing of five people in Keyham, Plymouth, in 2021, show the need for gun law reforms.

He told LBC Radio on Monday: “We’ve had these incidents from time to time with guns.

“And every time there is, there’s evidence, which I am concerned about, that people have access to guns that they shouldn’t have access to. Now, if it’s illegal access, obviously, that’s a pure matter of criminal law.

“But other people, where better checks should be taken over the circulation of guns… So I think that we need to look again as to whether those laws are strong enough. That may or may not help this particular case.”

He said: “Faced with Colombian drug cartels potentially killing people on London streets, is Starmer’s sensible, centrist answer to crack down on people like me, who use their shotgun twice a year?

“This is an idea as original as it will be effective; I would hazard to guess that tougher registration requirements for my pre-WW1 side-by-side won’t ensure violent Colombian drug cartels register the weapons they’re planning to use to murder people, given the one notable characteristic of criminals is that they don’t obey the law.

“The fact is that killings are already happening despite the UK having some of the strictest gun laws in the world.”

He said: “Starmer’s is certainly the easiest answer; being able to quote the number of guns removed from circulation through tougher registration requirements would be an easy way to say your government is doing something about the violence on Britain’s streets.

“But unless those weapons are being taken out of the hands of criminals it will make little difference to the real issue. What we have to do to crack down on cartel violence before it kills anymore is the difficult question, but it is the most pressing one.”

Cardinal Vincent Nichols from St Aloysius Church called on parishioners to pray for those caught up in the shooting. In a statement on the church’s website, he said: “Please continue to keep all involved in this terrible incident in your prayers, especially the young girl whose injuries are reported to be serious.

“I am most grateful to Fr Jeremy Trood for the manner in which he has handled this most difficult and tragic incident, in which the Church was used as a shelter and a place of recovery for many who were present at that time.

“I extend my sympathy and support to the family and friends who came together to pray for the souls of their loved ones who had died and who have been confronted with an outrageous act of violence leaving some injured and all in distress.”

The shots sent mourners running and screaming, with many sheltering inside the church, witnesses said. The memorial service was a requiem Mass for Sara Sanchez, 20, and her mother Fresia Calderon, 50, who died in November.

Ms Sanchez suffered from leukaemia for three years before succumbing to the disease after her mother died suddenly from a rare blood clot on arrival at Heathrow from Colombia, MyLondon reported.