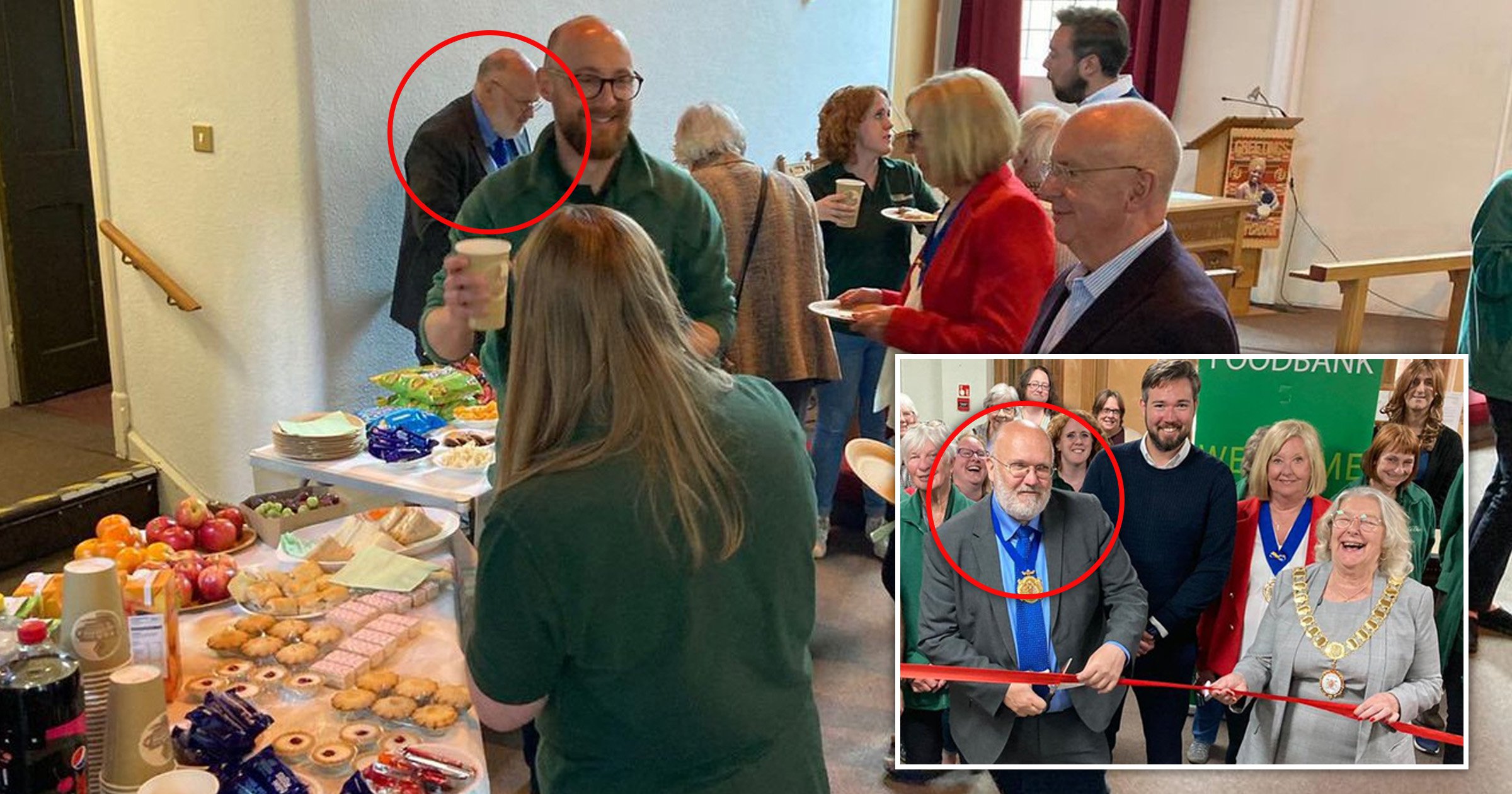 Tory dignitaries tucked into a spread of cakes and sarnies after cutting the ribbon on a new food bank.

Dartford Conservatives were guests of honour at the opening of a new facility for impoverished families in Kent.

The delegation has been lambasted after a picture emerged of the mayor and other senior guests smiling alongside volunteers at the ribbon cutting.

Now another image has revealed the party went on to enjoy a buffet after the opening event – in the same church building where desperate families will queue for handouts.

The leader of the local Tory council, Jeremy Kite, was among those crowded around the sandwiches and sweet treats.

Pictures of the event were hastily deleted from the mayor’s Facebook page after they triggered a backlash.

Nicholas Hair, a Labour council candidate in Bexley, said: ‘Having worked with colleagues in Dartford, and seeing the destitution of up to two million people across this country right now, this was disgusting to see.

‘Food banks are not “heart warming”, they are evidence of a failure of government and of a society to seek social justice.’

He described the smiling of Tory councillors as ‘callous’, adding: ‘To then see them tucking into a buffet as some people wonder when their children will next get a full meal is the final insult.

‘I am not surprised that the mayor and the council tried to erase all evidence of this but the electorate of this land should remember this sort of behaviour when they next go to the ballot box.

‘It could be any one of us, any time, that falls into these circumstances and we have to make sure we never revisit this period again.’

A spokesperson for the food bank said the ‘light refreshments were donated for the foodbank volunteers, for all the hard work they have done for foodbank, particularly during the pandemic’.

Councillor Jeremy Kite, the Tory leader of Dartford County Council, defended the behaviour on LBC after it was criticised by host James O’Brien.

He insisted he was ‘trying to do the right thing’ and they were laughing at a joke rather than smiling because a food bank opening is a happy event.

Mr Kite said: ‘We were invited yesterday to open – it’s not actually a brand new food bank, it’s a new location where there’s been a lot of work put into it by the volunteers and others.

‘There was actually a bit of a joke just before the ribbon was cut and photographs will tell a snapshot of the moment.’

He defended the Conservative government’s record, saying ‘food banks didn’t begin with a political party… they began many years ago’.

Mr Kite said the ribbon had been suggested by the event organisers and the pictures had been removed from Facebook because the comments had become too ‘political’.

According to the Trussell Trust, more than 258,000 people in the South East were reliant on food banks in the 12 months up to March 2022, the highest of any English region outside London.

The pictures came to light on the same day a Tory MP said there wasn’t widespread need for food banks in Britain – saying families going hungry is down to the fact they can’t cook or budget properly.

Boris Johnson’s government has been criticised for not including immediate measures to help ease the cost of living crisis in yesterday’s Queen’s Speech.