The Prince of Wales placed a reassuring hand on wife Kate Middleton’s back as they paid their respects to the Queen following a service at Westminster Hall. The Princess of Wales was seen curtsying towards the Queen during her final journey ahead of her funeral on Monday, 19 September. This afternoon, the late monarch left Buckingham Palace for the final time, with the King and the royal family walking behind her coffin in procession to the lying in state.

The Queen’s coffin will lie in state at Westminster Hall until Monday, with Prince William and Prince Harry being part of the procession this afternoon.

Her Majesty’s family marched behind her coffin as it was carried to Westminster Hall, with thousands of Brits lining the route in the heart of the capital.

Kate did not join the procession but left for Westminster Palace by car, followed by another vehicle that carried the Duchess of Sussex and the Countess of Wessex. 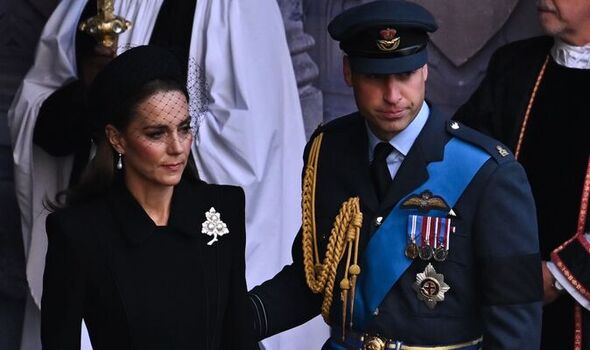