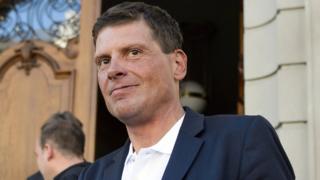 Tour de France winner Jan Ullrich has been fined by a court for assaulting a female escort, according to German media reports.

The 45-year-old was accused of strangling the woman inside a hotel room in Frankfurt in August last year.

Ullrich has apologised to the woman, who said she was not interested in further prosecution.

The court did not name Ullrich, but German news agency DPA said it was him.

Police said at the time of the incident that he argued with an “escort lady” and “physically attacked and injured her.”

Ullrich was under the influence of drink and drugs at the time of the incident.

He is the only German cyclist to win the Tour de France. Ullrich also won a gold medal in the road race and a silver medal in the time trial at the Sydney Olympics in 2000.

In 2013, he admitted to doping, having served a two-year ban by sporting regulators.