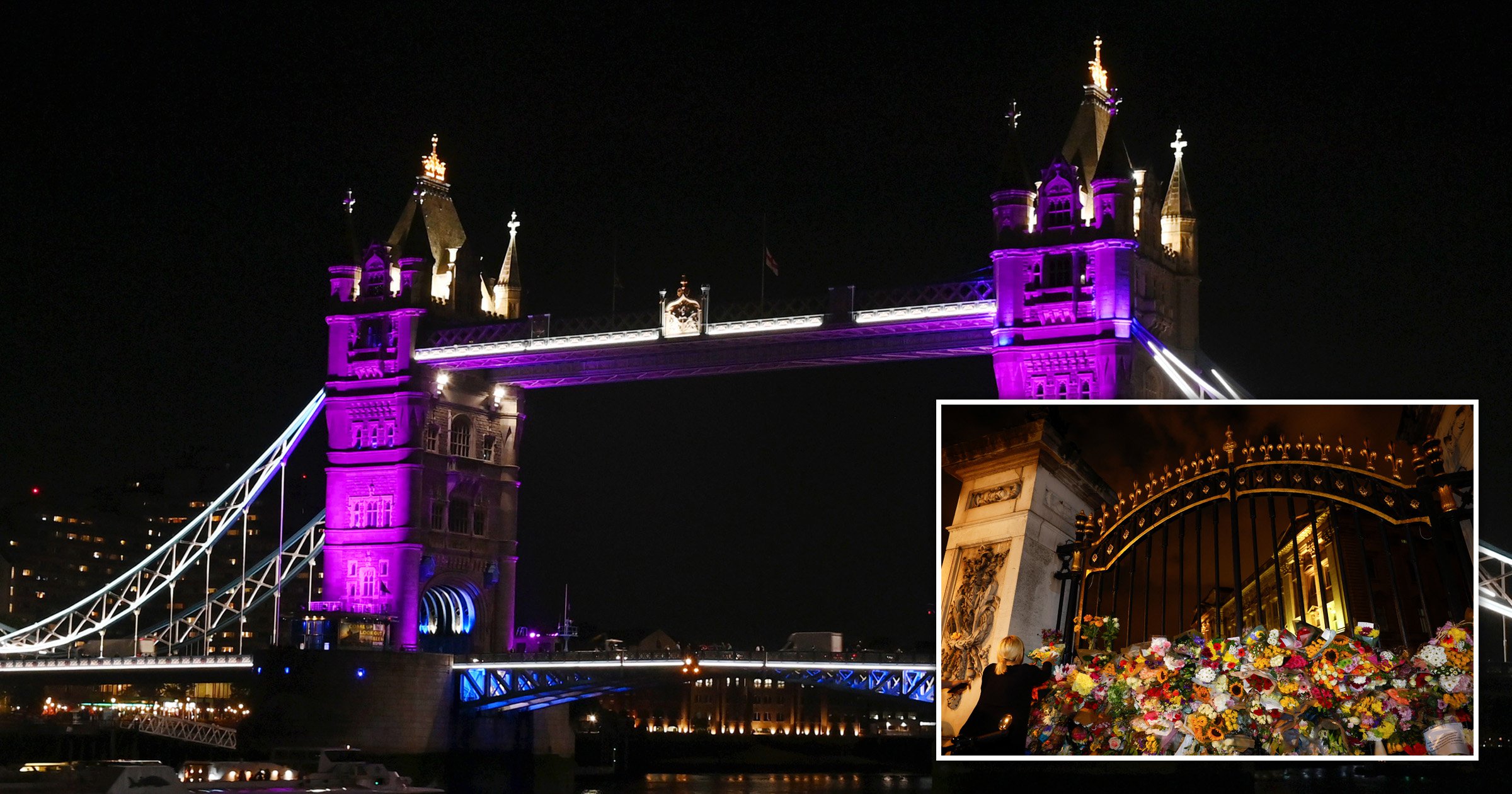 The people of Britain have come out in their masses to pay their respects to the Queen.

Thousands of mourners continued to gather at Buckingham Palace last night, laying flowers in memory of Her Majesty.

People have been laying hundreds upon hundreds of tributes outside the palace and around London, with people seen wiping away tears for their loss.

In another touching tribute, Tower Bridge in the centre of the capital was lit up in purple to honour Queen Elizabeth II.

It marks a shift in Britain as the country says goodbye to one monarch, but welcomes a new King.

King Charles III gave a heartfelt speech yesterday evening, in which he promised a ‘lifelong service’ to the country as he payed tribute to the Queen on her ‘last, great journey’.

He appeared on the verge of tears as he thanked his ‘darling mama’ for her devotion and love to the nation.

Earlier that day the King had been greeted by rapturous applause from thousands of well-wishers outside Buckingham Palace, who were singing ‘God Save the King’.

The King was heard saying, ‘Thank you so much, it’s so kind, it really is,’ and ‘God bless you’.

Outside Buckingham Palace, the Royal Standard was raised above the palace for the first time during his reign.

A woman could be heard shouting to him: ‘We love you King Charles and we loved your mum.’

Another woman was even seen leaning over to give the new King a kiss, as onlookers shouted three cheers for Charles.

The new Queen Consort, Camilla, comforted her husband as he was seen wiping away a tear.

Confiding in new prime minister Liz Truss later in the day, Charles was heard saying it was a ‘moment I have been dreading’ during their first audience.

And today, the King will formally be announced as the new monarch in a traditional ceremony.

The Accession Council will meet in St James’s Palace at 10am today before a proclamation is read from the balcony by a courtier, publicly declaring him King.

The event will then be accompanied by further celebrations such as the firing of guns in Hyde Park and at the Tower of London, as well as blasts of fanfare played on trumpets.

It is open to the public for the very first time and will be broadcast to the nation.

Even though Charles became King as soon as the Queen died, tradition means the council must meet shortly after the death of a monarch to make it official.

Camilla, and Kate and William – the new Prince and Princess of Wales – are expected to be in attendance.

A full coronation is unlikely to happen until at least next summer.