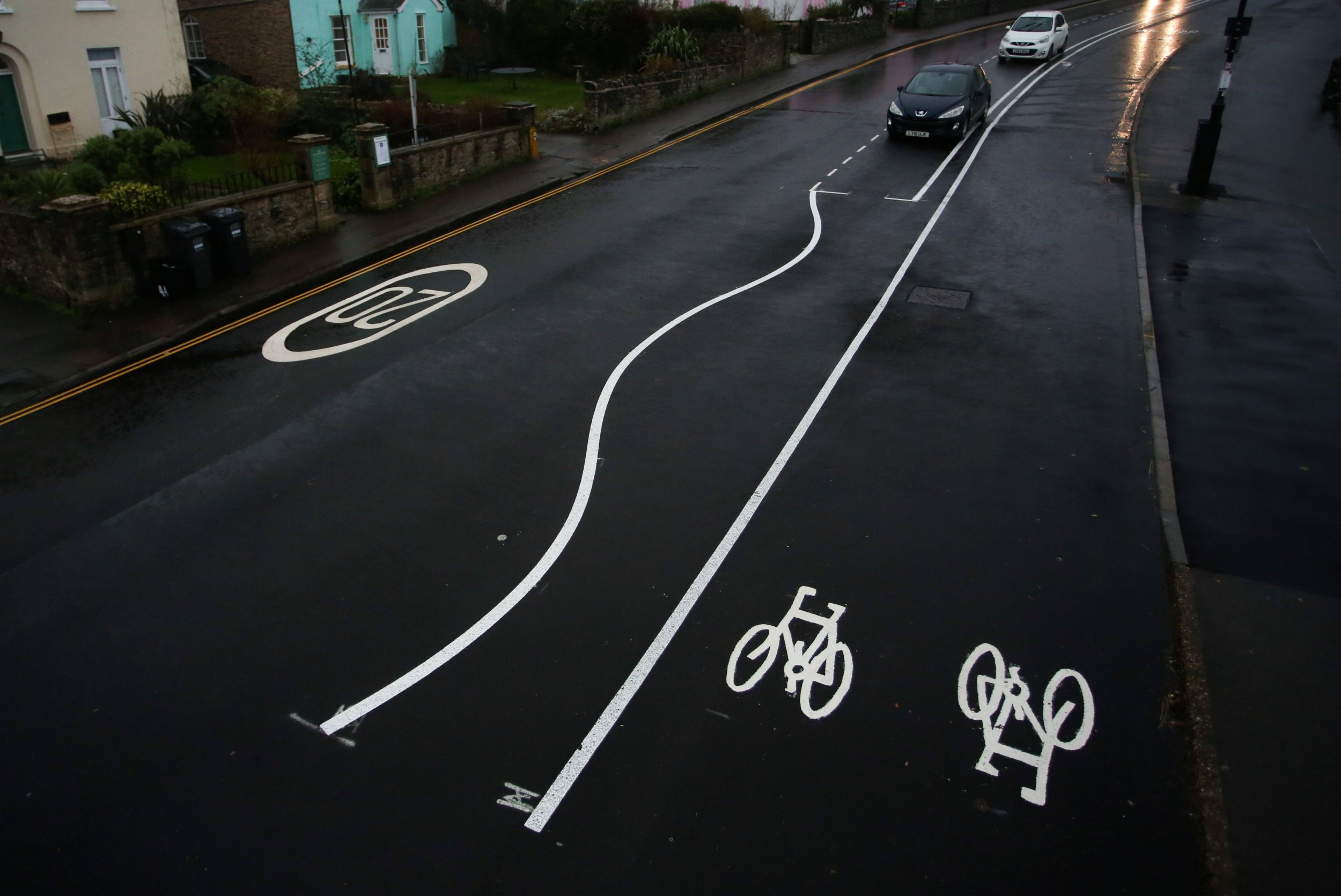 A new road layout has left people flummoxed after a council painted a wiggly white line.

The road was converted to a one way street so that a bike lane could be created along with space for parking.

But at the end of the parking section, one of the white lines snakes along in a wavy line.

The section of road along the seafront in Clevedon has been described locally as looking like a lane for drink drivers.

Somerset Council reckons that the design makes the road feel narrower and should slow down traffic.

However, people in the town have ridiculed the pattern saying it is an accident waiting to happen and have launched a petition against it.

Gary Bell said: ‘What idiot “redesigned” the parking on the sea front ? There were 75 spaces before and now there’s 28 ! I’m all for cycle tracks but having one the same width as the road with cars to park in a line between the cycle path and the road is nothing short of stupidity….. and don’t start me on the one way system ! Traders such as 5 the Beach are suffering’

Kate Anthony-Wilkinson said: If you visited Clevedon in the last few weeks you will have seen the mess that the council has made to the sea front – a totally unnecessary two way cycle way which goes nowhere; significantly reduced parking by the pier; ridiculous layout; the most bizarre white lines ever seen; and a one way system.

‘In the area which will increase both traffic and pollution. We went for our usual walk and cream team, got gridlocked and gave up. This will not only severely impact Clevedon businesses but as a rates payer I object to the waste of money on a scheme which appears to deliver nothing of benefit.’

Pete Brooks added: ‘I kid you not, the squiggly lines are opposite driveways to allow vehicles to swerve to get round and into their drives without crossing the white line.’

Others dubbed the line a ‘snake lane’, while user Prodough91 posted: ‘Balamory from hell for a motorcycle.’

A council spokesman said: ‘The lines are a design feature to reduce the potential abuse of parking at these locations and help make the road feel narrower, which is a technique used to slow traffic speeds.

‘In this case, the area is adjacent to the sailing club entrance so needs to be kept clear.

‘A wavy line provides uncertainty to the driver and is proven to help reduce unwanted parking.’

The wiggly lines are due to be finished with a surface treatment in the spring, but businesses say it will harm trade, waste money and make the seafront more dangerous.

Their fears were supported in a report by a highways consultant, who highlighted a number of safety concerns.

North Somerset MP Liam Fox has sent the report to the Transport Secretary, asking if there is any way to stop the scheme.

Dr Fox said: ‘I have visited the site on numerous occasions, accompanied by residents and traders, whose initial fears about the impact of the scheme have been more than borne out.

‘We are keen to know if there are any mechanisms available to bring the scheme to a halt and whether there are any precedents of which your department is aware, where similar schemes have been stopped or compulsorily altered because of safety concerns.

‘A vast amount of public money is being spent to solve a problem which does not actually exist. We do not have major road safety issues on Clevedon seafront at present, despite it being a Victorian amenity.

‘We will, however, have safety issues in the future as a result of the incompetent plans of the current North Somerset Council.

‘The project is not popular, not safe, not affordable, not properly consulted upon and not necessary.

‘It damages historic amenity, will disadvantage visitors, especially the elderly, will disrupt local trade and impede access to local residents.’