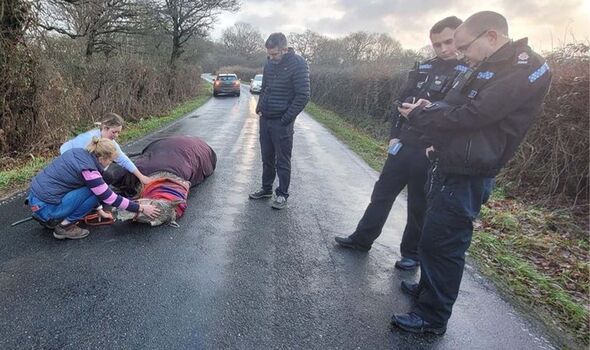 A woman says her horse suffered a “horrific painful death” after fireworks like “mortar bombs” led to her bolting through a fence. Joanna Barnett’s horse, Tallulah – who she describes as her ‘best friend’ – was put down as her level of injuries meant that the pain she was experiencing could not be helped with veterinary painkillers.

It was New Year’s Eve when the sky over Outwood village in Surrey erupted into explosions of light and sound, reports SurreyLive, as neighbours let off fireworks to bring in the New Year.

But Tallulah became spooked by the loud noises and bolted through a fence. Surrey Police closed off the road where Tallulah had collapsed as Joanna arrived at a “horrific scene” she says she will “never be able to forget”.

Talullah suffered multiple injuries and was treated by an emergency vet who sedated her, gave her fluids and  helped to get her home.

The horse was still in “horrific pain” at 1pm on New Year’s Day, according to Joanna. She said: “She was shaking, dripping with sweat, falling over, and showing a heart rate of 120.” The vet advised Joanna that Talullah would need to be put down and Joanna watched on as the beloved horse that she had owned for 18 years was euthanised.

Now Joanna says that Tallulah’s death was a “direct result” of neighbours letting off fireworks, which had been going off sporadically for weeks. She said: “They’ve been going off realistically from Halloween onwards and it’s not predictable. It’s not like you can say, ‘okay well on that night I need to be there and watch’.

“I’ve got neighbours that have to sedate their horses and give them drugs to calm them and keep them safe. But in this instance, fireworks have been off on Christmas Eve, Christmas Day, Boxing Day, about three days in between Christmas and New Year, New Year’s Eve, New Year’s Day, ranging from about nine o’clock in the evening, and I was told they’d still been going on til one o’clock in the morning. I think it’s just got out of hand really.”

Some of the fireworks that had been lit on New Year’s Eve “were not ordinary fireworks”, according to one person Joanna spoke to. She said: “They were like mortar bombs, one person described them as. Whether that’s true or not I don’t know.”

Having written to her local MP, Joanna wants the law around fireworks to be changed. She said: “You can’t buy three packets of paracetamol but you can buy a packet of explosives in the shop. That just blows my mind. I think that does really need to be looked at again and changed. The laws that are in place aren’t good enough to give the police confidence to protect animals and livestock.

“In this day and age, I think humanity can do better than this. We know they cause suffering we’ve had literally thousands of messages. It’s restored my faith in humanity, I’ve had thousands and thousands of messages directly via social media, messages with support love, and care, and many of them have lost animals, I’ve had a message from a vet of nine years in Afghanistan who’s terrified of fireworks, can’t bare them, hates them, his dogs hate them.”

She went on: “Tallulah suffered horrifically, I saw it with my own eyes. She was in so much pain that veterinary painkillers didn’t stop it. She was so shocked and broken that she was falling over.”

Joanna is encouraging people to write to their local MP to ask for changes in the way that fireworks are distributed in the UK. She says that she does not want any more animals and pet owners to have to go through this type of experience again.