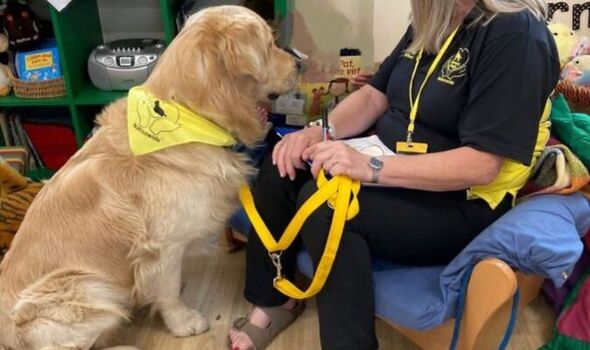 Findlay, who was almost three years old, had been walking near the Tiberthwaite Valley, Cumbria on Sunday, May 22. He had been with a man who was climbing the main quarry at Hodge Close in Coniston when he fell.

Rescuers arrived at the scene on Sunday morning.

The team tried to resuscitate Findlay but he sadly could not be saved.

The serving therapy dog has been described as a “much loved and happy boy” who helped children and adults with his “calm and friendly nature and big heart”.

Coniston Mountain Rescue Team was called by Cumbria Police to rescue the pup after he fell at around 11.30am on Sunday.

Eleven volunteers were sent to the scene in an operation which lasted nearly three hours.

Rescuers administered CPR on Findlay, who was then raised to the entrance of a water-logged tunnel so he could be lifted out of the quarry.

Despite their efforts, they were unable to save him.

Coniston Mountain Rescue Team said: “It was a cloudy and showery morning when we were called by Cumbria Police about a dog that had fallen approximately 45 metres into the main quarry at Hodge Close.

“We despatched two Land Rovers and soon located the dog, Findlay. A gentleman who was climbing in the quarry was with him.

“Sadly, after administering CPR, Findlay could not be resuscitated. We put him onto our stretcher and a rope lift system was used to get the stretcher up to the entrance of a water-logged tunnel where we could walk out.”

The rescue team added: “Beautiful Findlay was nearly three years old. He was a much loved and happy boy, who was also a therapy dog, helping children and adults with his calm and friendly nature, and big heart.

“Our thoughts are with his owners, as well as his extended family.”