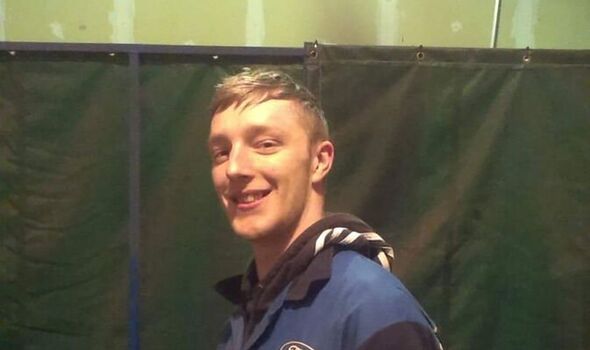 Christopher Walters, 25, was in “grave danger” by the time police arrived to the scene as he had been pinned down by members of the public. Mr Walters was dashed to hospital but medics were unable to save him.

His killer Benjamin Hunt has since been jailed for 38 months after admitting manslaughter. Another suspect was found dead as he awaited trial for manslaughter.

A hearing into the death of Mr Walters heard he had caused damage to an Audi before being chased and detained by the two men – who worked at a mechanics garage – in Longton, Stoke-on-Trent.

He sustained a hypoxic brain injury.

Sarah Murphy, assistant coroner for Stoke on Trent and North Staffordshire, asked Henry Mainwaring – a solicitor representing the family – “Is it accepted by the family that the car window screen was damaged?”

He replied: “Nobody says ‘I saw Christopher do it’. They are not in a position to make admissions to that.”

Mr Mainwaring added: “There was no finding of fault in the response of the police. There seems to be suggestions that when Sergeant McKenzie arrived, he was slow to respond to the gravity of the situation.

“It can never be the case where Sergeant McKenzie should’ve been expected to commence CPR immediately.

“The point where the story starts is the accounts where the windows were smashed.

“It’s clear by the time the police arrived, Christopher was in grave danger. His airways had been compromised. He suffered a hypoxic brain injury.”

Mr Walters, from Bentilee, Stoke-on-Trent, died hours after the showdown on May 15, 2019.

The pre-inquest review yesterday heard his family want to understand how he suffered the extent of his injuries on the ground.

Twenty statements from witnesses have been gathered on what took place before police arrived at the scene.

Addressing the court, Ms Murphy said: “There’s no dispute as to why the police were called.

“I’m not going to be calling Mr Hunt. I don’t think the family can seek to go beyond the facts that have been agreed in a criminal court.

“The scope will include the criminal conviction of Mr Hunt.”

The inquest has been adjourned and will resume on March 31.