The documentary will show the European Council President’s team anxiously waiting for the news whilst watching Sky News on the night Theresa May presented her Brexit deal to her Cabinet last November. The BBC Brussels correspondent claimed President Tusk was “chewing his fingernails” in trepidation and revealed the moment Cabinet approved the Prime Minister’s deal, the EU negotiating team celebrated with excitement. Mr Fleming said watching the documentary clip was “utterly tragic” knowing the team was then only a few hours away from realising Parliament would not back the Prime Minister.

He said: “There is a documentary that it’s being made by Task Force 50 by French-Belgian television and I managed to have a quick peek at it before it’s broadcast in a few weeks.

“And the best bit of it is on the night of the 14th of November when the Cabinet lock-in was happening to get them all to sign up to the deal, and there’s some amazing footage of Barnier chewing his fingernails watching Sky News.

“And then there’s a bit where Stephanie Riso who’s the chief of strategy for Task Force 50 gets a text that says the Cabinet has signed off the deal.

“She legs along the corridor to her best friend Sabine Weyland’s office and they are hugging each other and laughing and everyone is high-fiving. 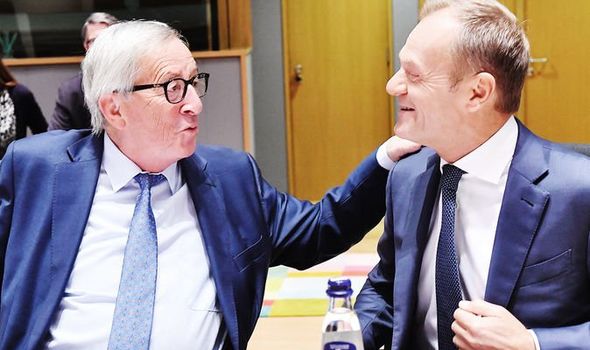 “And even Stefaan De Rynck cracks half a smile and we all know for him it’s quite a lot.

“The emotion they are going through is amazing and watching it now in retrospect it is utterly tragic because just hours later it became clear how hard it was going to be to get the deal through Parliament and that was just the first step.

“And I watched that and I felt so bad for them because they were so excited and so happy by what they’d achieved and actually they hadn’t achieved anything yet.”

Almost five months later, the UK and the EU are yet to come to an agreement to finalise the Brexit process.

And after a short extension to move the final Brexit date from March 29 to April 12, the Prime Minister has requested a further extension to June 30 in the last bid to come to a compromise with MPs in Parliament.

Mrs May is holding cross-party talks with Labour leader Jeremy Corbyn in the hope they find a joint solution to the Brexit impasse.

As Government talks with Labour on EU withdrawal went into another day, the issue of a new Brexit referendum continued to be a focus of attention.

Ministers have considered the possibility of giving MPs a vote on holding a referendum on a deal as part of the talks with Labour, the Daily Telegraph reported.

It is understood the Government could set out proposals to Labour leader Jeremy Corbyn in a letter on Friday.

And Mrs May faced a continued challenge to her authority from Parliament as the House of Lords debated a Bill aimed at extending the Brexit process in a bid to avoid a no-deal scenario.

The remaining stages of the European Union Withdrawal (Number Five) Bill will be considered by peers on Monday, threatening a new political headache for the PM if it is approved.