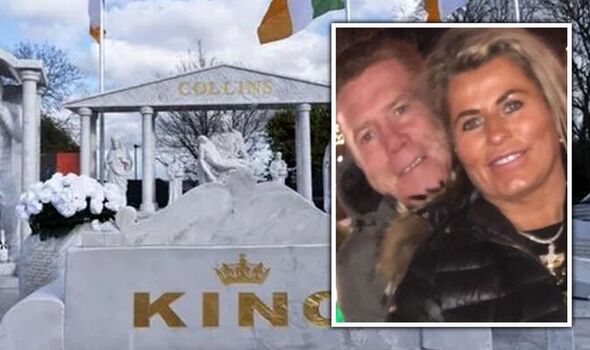 William Collins, dubbed the ‘King of Sheffield’, died from a heart attack on holiday in Majorca in August 2020 aged 49. Kathleen Collins marked her husband’s life with a giant headstone at Sheffield’s Shiregreen cemetery using Carrara marble imported from Italy. The memorial is thought to be Britain’s largest private grave.

Amid outrage over the size of William’s gravesite, Kathleen has now said complaints are fuelled by “racism and jealousy”.

She said: “The council have raised concerns because members of the public have been hounding them to complain about it.

“There’s a lot of racism and jealousy involved because Willy was a famous traveller who was known all over Sheffield.

“There have been vicious comments on social media from those who hate the traveller community and they have left the whole family feeling very hurt and angry.

“People are threatening to pull the monument down or damage it while the Council is saying we may have to change it, it but if that happens, there’s going to be war.”

Speaking to the MailOnline, Kathleen added: “It’s going to cause very, very bad riots if they take my husband’s headstone down.

“I am warning the public and the Council, don’t touch the beautiful monument we have put up to remember my darling Willy.”

The memorial is estimated to have cost an estimated £200,000 and is carved from Carrara marble imported from Italy.

It features two life size statues of Willy, a stone seat engraved with the word ‘King’ and a solar-powered jukebox playing his favourite songs.

It is surrounded by four flagpoles bearing the Irish flag, depictions of Jesus Christ and biblical scenes and is lit up in LED lights that change colour.

It is also under 24-hour CCTV monitoring, which his family have access to in order to see and “speak” to him.

On Thursday, March 24, Sheffield City Council said the 37-tonne marble memorial does not fit the planning permission granted by the local authority.

After initially granting Kathleen and the Collins family permission for the site, a council spokesperson told The Irish News the planning breaches did not become known until after the memorial was unveiled.

Rules for the cemetery state memorials must be no taller than 4ft and 4in, and only 3in thick.

The spokesperson added: “We have reached out to the family and intend to discuss changes which need to be made in order to satisfy the cemetery rules and take into consideration other cemetery users.”

The Collins family have also hired security to protect the huge tombstone from vandals and people who want to demolish it.

Mary Collins, William’s daughter, told the Sun: “Any attempt to have us take this down would be fought legally as it would be a blatant matter of racism. The Council knew what we were doing.

“They signed it off. The footings were down for months and it took the builders two weeks to construct the headstone so they had plenty of chances to raise objections.”

She claimed it was not even the tallest one in the cemetery, with one to the Bishop of Sheffield looming over it.

The family said they have hired a security firm to protect the site as well as erected CCTV cameras.

Willy, a father of nine who had 18 grandchildren and 400 nephews and nieces. died after suffering a heart attack in Majorca in July 2020 while on holiday with Kathleen in an attempt to rectify their marriage.

Sharing details of his rich life, she described him as a charismatic “gentle giant” who “loved peace” and was also known affectionately as ‘Big Willy.’

Willy was born in the town of Athlone in central Ireland and was one of 16 brothers and sisters.

He moved to Sheffield as a boy in 1980 with his family and grew up in the Pitsmoor district, where he developed an interest in boxing.

Considered one of the leading bare-knuckle fighters of his generation, Willy’s last fight was only two years before his death at the age of 47.