Travellers finally left their first site on Monday after police and the council issued an eviction notice. People living near the field by Stockton-on-Tees, County Durham, complained the group had been littering, used taps in gardens of private homes and intimidated families.

But just hours after they left the site, the same approximate 20 caravans of men, women and children allegedly moved just eight miles southeast to pitch up at Harold Wilson recreation field in Thornaby, also part of Stockton. The new location, which is used for amateur and junior football, is around a 10-minute drive from their previous base.

Locals have expressed their concern after the travellers arrived.

Speaking to Teesside Live, one resident said: “I can’t believe the police have got them out of Stockton and they haven’t escorted them out the area and instead let them come here.

“They’ve opened the gate and they are driving in.”

Another said: “They have moved them from Bishopsgarth and now they have ended up here and we don’t know if there are any more coming.

“No offence to them but if they looked after the fields and took all the rubbish away then no problem.”

Council enforcement vehicles have been pictured at the new site but it is understood the group have not been asked to leave as yet, despite it being council land. 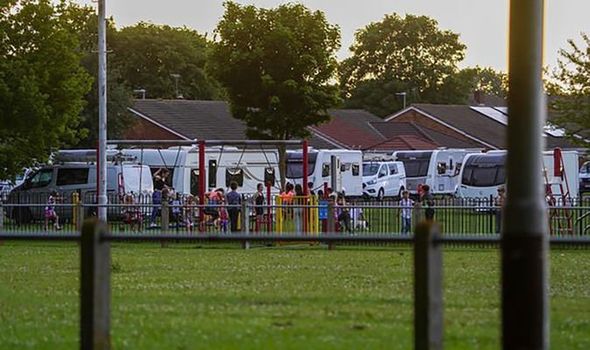 The owners of some pubs near the first site decided to close last week.

The 45-year-old woman added: “I closed early on Wednesday because one of them came in to use the toilet and asked if 35 of them could come in and stay back after closing.

“There was no way I could allow that. We’re a community pub and I have to look after our locals and regulars.

“They kept asking to use the toilets and whether they could use our outside tap for water. I’m on a meter here, it isn’t free.”

But the travellers hit out at the move to shut pubs.

One protested: “Why close them? “We don’t even drink.” 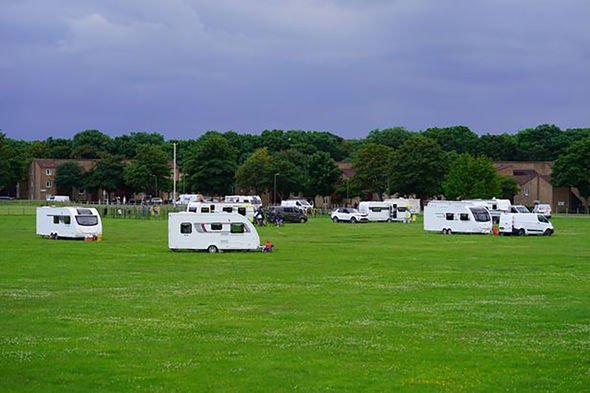 Stockton-on-Tees Borough Council, which has no overall control, say its officers and those from Cleveland Police will continue to monitor the new site in Thornaby.

A spokesperson for Stockton Council said earlier on Monday: “Our civic enforcement team have been to the site on Monday to serve the owners of the caravans with a Section 78 eviction notice, which was granted at Teesside Magistrates’ Court on Monday morning

“The notice requires every caravan to be removed from the site within 24hrs. Meanwhile, our officers will continue to maintain a presence in the area alongside Cleveland Police.”