MOSCOW — One of Russia’s most daring and innovative directors went on trial on Wednesday, charged in a financial fraud case widely seen among the country’s intelligentsia as a test of artistic freedom.

The director, Kirill Serebrennikov, and his three co-defendants pleaded not guilty to conspiring to embezzle 133 million rubles, or more than $2 million, in government funds allocated to a groundbreaking theater festival. They face up to 10 years in prison if convicted.

“I have never stolen anything from anybody and have never organized any gang apart from a theater group,” Mr. Serebrennikov, a theater and movie director acclaimed across Europe and beyond, said in entering his plea in Moscow’s Meshchansky District Court.

Although the charges are focused on a festival that ended almost four years ago, Russia’s artistic community considers it a much larger issue revolving around freedom of expression. In their eyes, the administration of President Vladimir V. Putin, having long since tamed the news media and the country’s once politically active oligarchs, is now determined to bring the arts to heel.

Mr. Serebrennikov, as the artistic director of the Gogol Center, a small Moscow theater that he revived, pushed the limits of what appeared on stage. Aside from thinly veiled criticisms of life under Mr. Putin, his productions often featured nudity and sadomasochistic undertones at odds with the family values image of Russia that Mr. Putin likes to project.

The Bolshoi Theater, Russia’s premier stage company, commissioned him to create and direct a biographical ballet of Rudolph Nureyev. The work’s frank portrayal of Mr. Nureyev’s homosexuality, complete with a pas de deux involving two men, discomfited some in a country where endorsing homosexuality is a crime.

Yet some top Kremlin officials were on hand to applaud the work when it debuted in December 2017. Mr. Serebrennikov could not attend because he has been under house arrest since August of that year.

“Being the focus of a court process in Russia is something like getting a Nobel Prize,” said Valery V. Pecheykin, a scriptwriter who also works at the Gogol Center and was in court on Wednesday.

“It is an award for everything that is forbidden and banned,” he said. “It means he was noticed by people who usually don’t go to the theater.”

Black humor aside, Russians artists are concerned that the case could have a chilling effect on artistic creativity. Theater was considered one area where Russia could hold its own for innovation at a time when it has few globally acclaimed artists in any field. 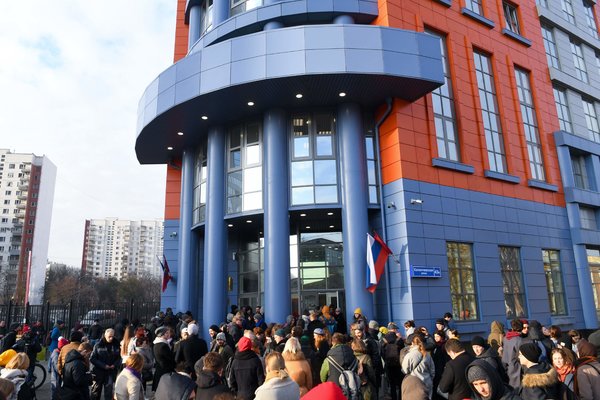 “I came to this trial to support Kirill and his employees as a theatergoer who constantly attended performances at the Gogol Center,” said Ludmila Ulitskaya, one of Russia’s most acclaimed novelists, who sat in the front row of a courtroom packed to capacity with some 100 spectators, most of them journalists.

She noted that a recent Moscow gallery exhibition chronicling the writings of noted Russian writers who were arrested and imprisoned included samples of Mr. Serebrennikov’s work.

“The history of this trial is a disgrace to the Russian justice system,” she said. “Apparently this is our national history.”

The case is focused on Platforma, a multidimensional contemporary art project that encompassed theater, dance, music and other media. It was first sponsored by the government under President Dmitri A. Medvedev as a sign that the Kremlin could do hip, too, and was considered hugely successful.

The government contends that Mr. Serebrennikov and his fellow defendants, working through Seventh Studio, a private enterprise set up to organize the festival, defrauded the Ministry of Culture through schemes like presenting inflated invoices.

Nina Maslyayeva, the accountant for the project, became a government witness after pleading guilty.

“The plan was to steal the money by setting prices higher than they were in reality,” a prosecutor, Oleg M. Lavrov, said in court. “Knowing that his actions would damage the Russian state, Serebrennikov was the main leader of the group.”

The proceedings were rather dry. Mr. Lavrov spent more than 90 minutes detailing dozens of cash transfers from the Culture Ministry to the theater festival’s bank accounts, repeating virtually every time that Mr. Serebrennikov and the others benefited illegally.

Lawyers for the defendants said that the government did not present proof that any defendant stole money, or demonstrate any gap between the value of the money spent and the costs of a festival that involved 316 events and 600 people.

Mr. Serebrennikov was the only witness to take the stand, speaking for about an hour. He denied the accusation of organizing a cabal, portraying the way the festival organizers came together as a typically Russian ad hoc process.

He also noted that the government transfers were so erratic that the main organizers often spent thousands of dollars of their own money to keep things going.

Dmitri Kharitonov, Mr. Serebrennikov’s lawyer, said that if the government had problems with the accounting, that had nothing to do with the people on trial. “There is no proof that Kirill put so much as a kopeck into his own pocket,” he said.