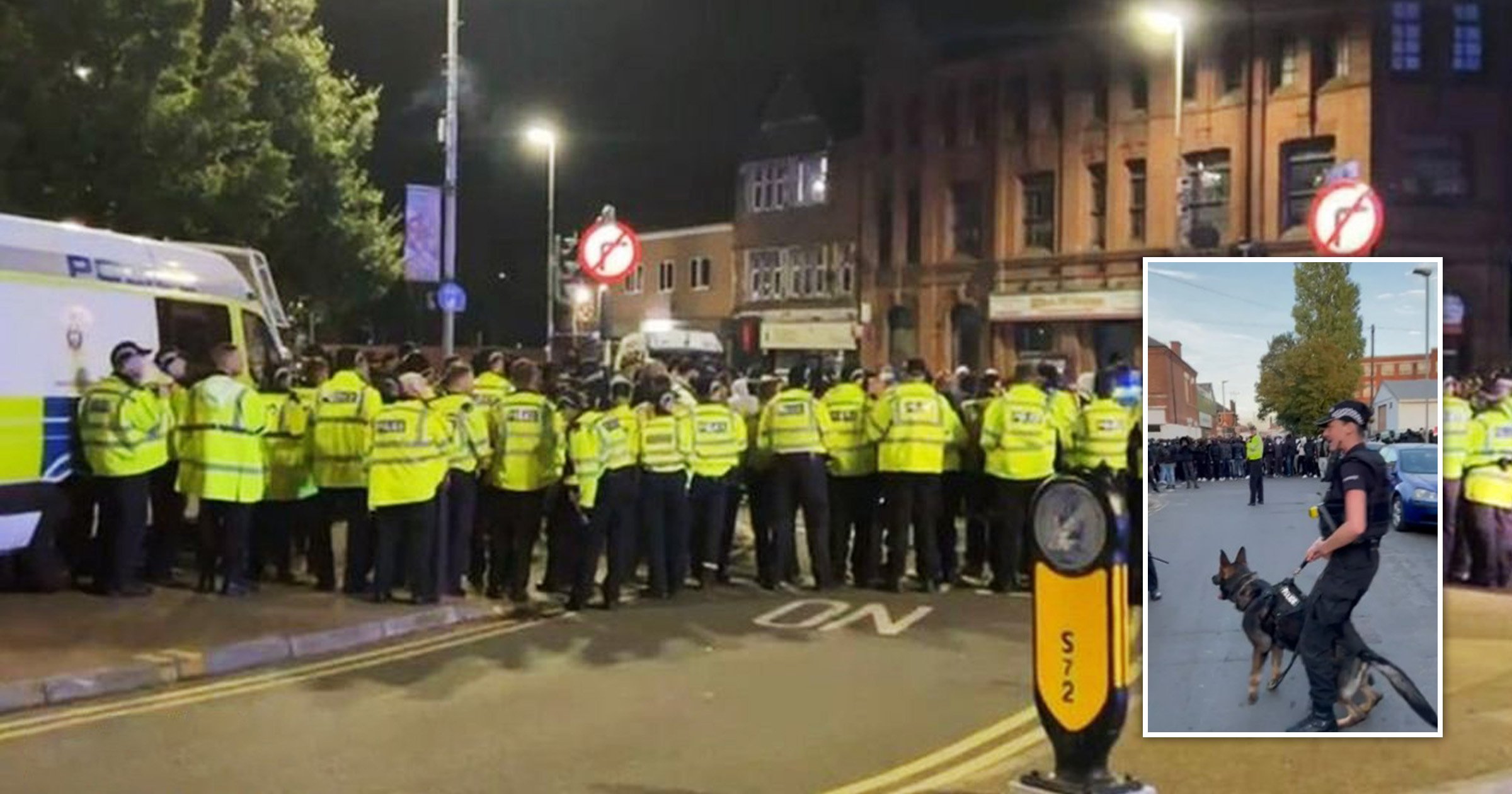 There have been calls for calm between communities in Leicester after disorder broke out overnight.

Video showed how an orange flag was pulled down outside a religious building, thought to be the Shivalaya Hindu community centre.

A spokesperson for the organisation posted on Facebook this morning: ‘Yesterday there were scenes of protest, violence and disorderly behaviour by a gathering of large groups of people on Belgrave Road.

‘We are shocked and saddened to see such behaviour. Please keep safe, we hope for order, oneness, unity, peace and calmness in our community.’

The city’s police chief released a video urging people not to get involved in the disorder.

In a video filmed at 9pm last night, temporary Chief Constable Rob Nixon said: ‘We have had numerous reports of an outbreak of disorder in parts of the east Leicester area of the city.

‘There are additional officers en route and dispersal powers and stop search powers have been authorised.

‘Please do not get involved, we are calling for calm.’

A spokesman for Leicestershire Police said two people were arrested on Saturday night and into Sunday morning.

They said reports that a mosque was being attacked were ‘not true’.

A police spokesman said: ‘Several incidents of violence and damage have been reported to the police and are being investigated.

‘We are aware of a video circulating showing a man pulling down a flag outside a religious building on Melton Road, Leicester.

‘This appears to have taken place while police officers were dealing with public disorder in the area. The incident will be investigated.

Claudia Webbe, MP for Leicester East, joined the police in calling for calm on Saturday night.

She wrote on Twitter: ‘This is a time for cool heads.

‘I implore everyone to go home. We can strengthen our dialogue to repair community relations.

‘Your family will be worried for your safety, please accept the advice of the police who are trying to defuse and are calling for calm.’

Suleman Nagdi, of the Leicester-based Federation of Muslim Organisations told the BBC: ‘There have been problems in the community since the India and Pakistan cricket match and while that game often sparks gatherings they have not in the past turned this ugly.

‘There are some very dissatisfied young men who have been causing havoc.

‘We need to get the message out that this must end and try to do this through parents and grand parents talking to their sons.’

Sanjiv Patel, who represents Hindu and Jain temples across Leicester, told the broadcaster: ‘We have lived in harmony in the city for many decades but over the past few weeks it is clear there are things that need to be discussed around the table to get out what people are unhappy about.

‘Resorting to violence is not the way to deal with this.

‘We are horrified and deplore what was going on (yesterday) and across the last two weeks.’