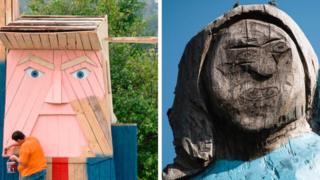 A wooden statue of the US president has been built in his wife’s home country of Slovenia, dividing opinion there.

The nearly 26ft (8m) tall statue was constructed on private land and depicts Donald Trump with a square head and jaw, raising his fist in the air.

The artist behind the statue told AFP news agency he wanted it to serve as a comment on populist politics.

It comes after a tongue-in-cheek statue of Mr Trump’s wife was erected in the country.

The sculpture of Melania, carved out of a tree trunk on the outskirts of her hometown of Sevnica, saw her dressed in a blue coat with a club-like hand gesturing to the sky. Some residents dubbed it “a disgrace”, and said it looked more like a Smurfette than the US first lady.

The new statue of the US president was built in the village of Sela pri Kamniku, about 20 miles (32km) north-east of the capital Ljubljana.

Its creator, Tomaz Schlegl, told AFP that it was meant as a comment on populism.

“For the first time since World War II populism is prevailing: look at [British Prime Minister Boris] Johnson, look at Trump, our president or [Hungary’s Prime Minister Viktor] Orban. Where is this world heading?,” he said. “We want to open people’s eyes about what democracy is.”

The statue of Mr Trump shows him wearing a blue suit and red tie, and striking a pose reminiscent of New York’s Statue of Liberty.

Mr Schlegl said a mechanism inside the wooden structure allows its facial expression to change from “very friendly during the week to really scary over the weekends”, symbolising the hypocrisy of populist politicians.

But the statue has divided opinion. AFP witnessed an angry resident driving his tractor into it this week as preparations were under way for its inauguration on Saturday.

Some online critics have decried the “waste of wood” and said it should not have been built.

“Our more traditional neighbours, country folk, claim it’s ugly and say it does not fit in this beautiful landscape,” Mr Schlegl said.

The US president is a polarising figure in Slovenia. His wife’s hometown has become a tourist magnet ever since he was elected in 2016.

As visitors search for an insight into her early years, residents have brought out ranges of Melania-branded merchandise including slippers, cake, and Trump-like burgers with fly-away cheese “hair”.

While the statue of the first lady drew criticism last month, one local resident told AFP news agency the artwork was a “good idea”.