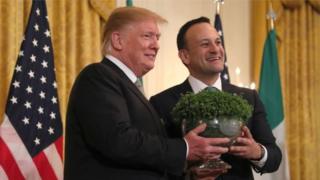 Donald Trump will arrive in Shannon later on Wednesday for his first visit to the Republic of Ireland as US president.

Air Force One is set to land at Shannon Airport at about 16:30 local time.

It will follow a visit by Mr Trump to Portsmouth to mark the 75th anniversary of the D-Day landings.

He will then hold a meeting with the Taoiseach (Irish prime minister) Leo Varadkar, before he goes to his golf resort in Doonbeg.

President Trump bought the Doonbeg hotel and golf course in 2014.

His meeting with the Irish PM is expected to last about 30 to 40 minutes, before departing for his golf resort in Marine One with the First Lady, Melania Trump.

What will President Trump and the Taoiseach discuss?

The talks are likely to feature similar issues to those discussed by the men when they last met at the White House for St Patrick’s Day celebrations.

A spokesman for Mr Varadkar said they would hold talks about bilateral relations, E3 visas, free trade and Brexit.

Last week, the taoiseach told the Dáil (Irish Parliament) that while Mr Trump’s current focus was on China, his attention may turn to the EU later in the year – so it was important to be ready for that eventuality.

The two leaders are also expected to discuss support from the United States for the Northern Ireland political process.

What is the significance of the visit?

The visit to the Republic of Ireland comes as part of a wider state visit by the US president to the UK, and for D-Day commemorations.

On Tuesday, he held talks with UK Prime Minister Theresa May where he paid tribute to the US-UK “special relationship”, and Mr Trump promised a “phenomenal” trade deal after the UK leaves the EU, suggesting it could double or treble trade. 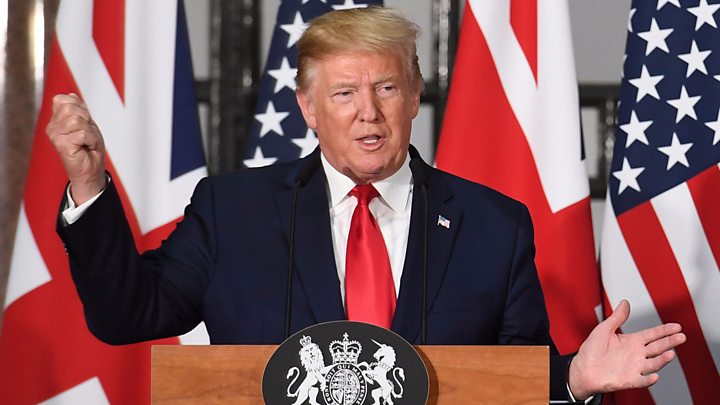 President Trump was originally due to visit the Republic of Ireland last year, but the trip was postponed for scheduling reasons.

There is likely to be interest in what he has to say about maintaining the US-Ireland relationship.

However, there is also expected to be opposition to the president’s visit, with a protest due to take place outside the grounds of Shannon Airport.

A protest took place in Belfast on Tuesday evening against the president’s visit.

Analysis: A courtesy call from an unpredictable president

Until a few short weeks ago, this visit had not even been publicly confirmed.

Since taking office in 2017, President Trump has repeatedly said he wanted to make a trip to Ireland – and now he is.

In Doonbeg, his purchase of the golf resort has been a big boost to the local economy – and while he stays there this week, it’s likely to rake in more publicity for the County Clare village.

His meeting with Leo Varadkar will not be a long affair and comes a day after talks with Theresa May, and a day before he meets France’s President Macron.

Nothing on his agenda with the taoiseach stands out so far, but as with all events related to Donald Trump, it is better to expect the unexpected.

How long is he visiting Ireland for?

President Trump will depart Shannon on Thursday morning to go to France for further commemorations.

He will hold a bilateral meeting with French President Emmanuel Macron before returning to his Doonbeg resort.

Senior Irish officials have been invited by the US delegation to Mr Trump’s golf club, including the Irish government’s special envoy to the US, John Deasy, and Ireland’s ambassador to the US, Dan Mulhall.

Mr Trump is expected to play golf on Friday before flying back to the US.

Why is the meeting happening in Shannon?

President Trump is the latest in a long line of world leaders to arrive at Shannon Airport.

Former US President Ronald Reagan touched down there to begin a visit in 1984, where he faced crowds of protesters over his administration’s foreign policy.

Unlike some of his predecessors, Mr Trump is not making a speech in the Dáil, and is not visiting any official Irish government buildings.