BRUSSELS — President Trump’s extraordinary, wheedling telephone call to state officials in Georgia seeking to overturn the election results there has shaken many Europeans — not so much for what it reveals about Mr. Trump himself, but for what it may portend for the health of American democracy.

With just 16 days left in his presidency, Mr. Trump’s capacity to shock the world with his epic self-centeredness and disregard for democratic and ethical norms is vanishing. The president has revealed himself many times before this latest episode — badgering and threatening Georgia officials to “find” him the votes needed to flip the state.

But even if Mr. Trump has not moved on, the world has. Foreign leaders are looking forward, but many worry that the Trump effect will last for years, damaging trust in American predictability and reliability.

“A lot of people will just roll their eyes and wait for the clock to run down,” said Leslie Vinjamuri, director of the U.S. and Americas program at Chatham House, the British research institution. “But by far the most troubling thing is the number of Republicans who are willing to go along with him, and what it’s doing to the Republican Party, playing out in real time.”

Some 140 Republicans in the House and 12 Republican senators have said that they will challenge Mr. Trump’s loss in the Electoral College on Wednesday, seeking an “emergency audit” of results in some states.

With Mr. Trump continuing to have such a hold over the party and winning more than 74 million votes in November, Ms. Vinjamuri said, “It shows us that it will be incredibly difficult to govern the country in the next year or so.”

If so many Americans feel that the election was fraudulent, “it looks like America can’t even secure the most fundamental norms of democracy, the peaceful transfer of power, when losers have to accept that they lost,” she said.

Indeed to distant observers, the corrosive effects of Mr. Trump’s presidency are not isolated to Mr. Trump himself but extend far beyond the president — to the deep coterie of enablers around him, in the White House and his party, and even to an American public where significant numbers themselves believe that their democracy has been compromised and cannot be trusted.

The dangers that entail for foreign allies are manifold and will not be easily dispelled even with a new president. But they are raising special concerns before Mr. Trump exits. 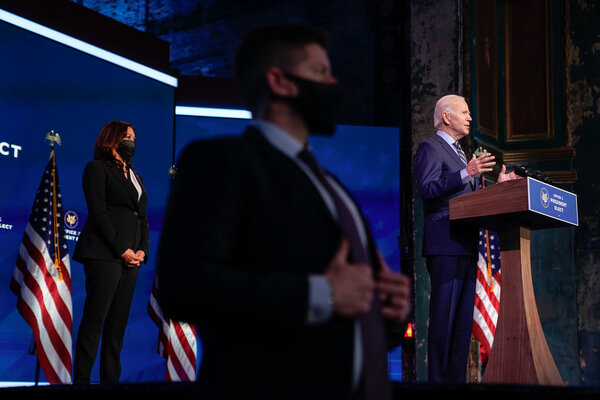 Patrick Chevallereau, a former French military officer now at RUSI, a defense research institution in London, said that the Trump call “shows that the current president is in a mind-set to do anything — absolutely anything — before Jan. 20. There is zero standard, zero reference, zero ethics.” He added: “Everything else than himself can be destroyed and collapse, including us.”

Thomas Wright, an Irish-born expert on America at the Brookings Institution, said that “People are worried for real that Trump will come back.” The months since the election have shown people “just how bad a second term would have been — the guardrails off, a completely personalized government and giving voice to his authoritarian tendencies,” he said.

“Now the rest of the world understands that Trump could actually make a comeback in 2024, so that is a shadow that he will cast over American politics,” Mr. Wright said.

World leaders “all know that Trump is sort of crazy, but it’s the extremity of his actions, the lengths to which he has gone, that he got 74 million votes and is not retiring but will be a force for the Republicans” that is disconcerting, he added. “People knew what Trump is like, but the importance is the shadow of the future.”

Also troubling to many is the letter that the last 10 living secretaries of defense all signed urging the nation — and the military — to accept that the election is over and “the time for questioning the results has passed.”

Jean-Marie Guéhenno, a former French and United Nations diplomat who is president of the International Crisis Group, asked on Twitter: “Should we be reassured on U.S. democracy when 10 former defense secretaries warn against use of the military to dispute election results, or terrified that they believe taking a public stance has become necessary?”

The current acting secretary of defense, Christopher C. Miller, has not cooperated fully with the transition team of President-elect Joseph R. Biden Jr., while Mr. Trump’s former national security adviser Michael T. Flynn, whom Mr. Trump recently pardoned, has called for martial law and had a meeting at the White House, and that has clearly caused concern.

“It’s the things we don’t know that are scary,” Ms. Vinjamuri said. “We don’t know who else in the Pentagon is not cooperating, and it’s worrisome that these former secretaries clearly felt they had to issue a warning to people in the Pentagon that they need to uphold their oath to the Constitution.”

François Heisbourg, a French security analyst, jokingly asked, “How many wars can you start in 16 days?” But he, too, was struck by the autocratic tone of the Trump call and the hold Mr. Trump continues to have on so many key members of the Republican Party.

If the Senate runoffs in Georgia produce Republican victories on Tuesday “despite this impeachable phone call,” Mr. Heisbourg said, “the international reaction will be that the Republicans are not going to divorce Trumpism — after all, while Trump lost, they didn’t lose the legislative elections but did better than two years ago. Trump’s ability to get a grip on the party and keep it to the end is what is stunning and what scares people outside,” he said.

For others, Mr. Trump’s behavior is by now taken for granted, but so are its debilitating effects on America’s democracy and its standing in the world.

Laurence Nardon, head of the North America program at the French Institute of International Relations in Paris, said that the Trump call was “more of the same,” so not especially shocking. “American soft power, as a model of democracy, is damaged by Trump’s actions,” she said. “But I think we have understood that his practice of power is an exception, even if his election is not an accident.”

Robin Niblett, director of Chatham House, said that in general, “Europeans are no longer surprised by anything Trump does, but more disbelief that someone like Trump was ever president.”

There is confidence in the American system, Mr. Niblett said. “But what is more worrying is how many significant Republican players believe that it will do them good to play to this gallery, this scorched-earth, fake, disinformation politics, in which you raise doubts in people’s minds about your own democracy and than use those doubts politically.”

The big risk, he said, is that even if the American system can turn aside authoritarianism, “there could be a really brutal dynamic that makes it hard for America to be the partner people overseas need and hope for.”

After this phone call, Germans are holding their breath about what Mr. Trump might do next, said Jana Puglierin, director of the Berlin office of the European Council on Foreign Relations. “News like this confirms everything that Germans have been hearing in the media for the past four years,” she said.

The letter of the former defense secretaries was also an eye-opener in Berlin. “They realized this is serious,” Ms. Puglierin said. “That they see a reason to write such a letter is shocking.”

Sophia Gaston, director of the British Foreign Policy Group, a research institution, said that “President Trump’s desperate efforts to interfere with the election results and subvert America’s democracy are now almost universally regarded in Westminster as a pitiful last howl at the moon.”

More optimistically, she said: “What is clear is that the tremendous impact that Trump’s administration has had on America’s standing in the world is coming to an end. There are high hopes for Biden to restore America’s moral mission, and the focus in Britain is entirely on looking forward, identifying areas of alignment and common interest with the new Biden administration.”

Royal family 'to step up and support Queen' says expert When you subscribe we will use the information you provide to send you these newsletters.…