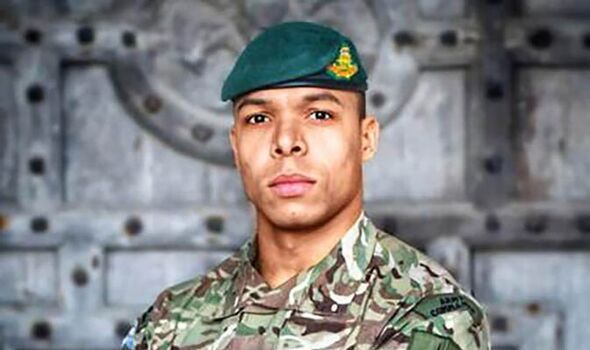 Having left school at 15 with three GCSEs, his mother Maryam refused to sign his papers so he could join the military. She feared that as a teenager of mixed race, he risked being bullied. But not only has he happily proved his mum wrong, Danny, a Rastafarian by faith, is leading a “Rasta revolution” across the military which has now earned him an MBE.

“I didn’t get on with school,” he admits. “I had learning difficulties that weren’t identified by my teachers, so I became more disillusioned with it. I knew I was more intelligent than I was allowed to express but I wasn’t given that support.

“I couldn’t read until I was about 11 and that was a big challenge for me. After not doing so well, I set my heart on joining the Army.”

However, his mother wouldn’t give her consent, which meant he got a job selling toy helicopters, as opposed to flying in real, military ones. “I hated it,” he confesses. “I wanted to get out there and serve my country.”

Happily, his family relented and Danny, 30, has enjoyed a meteoric rise through the ranks to Captain and is tipped to become a Major later this summer.

Viewers of the BBC Two documentary series, Commando: Britain’s Ocean Warriors, will get to see Danny at work in episode three on Sunday.

He is filmed while working as Adjutant for the Army Commandos, a 400-strong fighting force based at an ancient fortress, The Royal Citadel, Plymouth, near the Royal Marines’ headquarters. With disarming charm and honesty, Danny tells the programme: “I don’t think people expect you to be a Rasta and join the British military.

“That was something my family initially struggled with. There were massive reservations from my family.

“I’ve been a Rastafarian all my life. That is my faith. I am a Londonder, British, but at that time those things did not cohabit naturally.”

Danny was born in Tottenham, north London, and only met his biological father briefly when he was four. However, he was close to his stepfather Paulus, a Rastafarian with Jamaican roots, who died when he was 16. His mother Maryam was a social worker and encouraged Danny, his three other brothers and sister, to work hard and to treat everyone openly, honestly and equally.

As a boy Danny lived abroad for more than a year, including six months in Jamaica, so when he returned to Britain at 11 he found studying hard. But when he signed up, he came top of his Army selection board.

In 2011, when he was 19, he saw action with the Royal Artillery in Helmand Province in Afghanistan, as a gunner providing fire support with mortars and artillery.

Being on the frontline in the war against the Taliban was a sink or swim moment, but he showed solid team leading skills in a combat situation, and was later recommended for officer training.

In 2015, he was sent to Sandhurst Royal Military Academy, where he won the sword of honour.

There are touching scenes in the documentary when Danny shows his mother his medal for serving in Afghanistan as well as his MBE, awarded for the role he played in establishing the Defence Rastafarian Network.

When Danny joined the military, dreadlocks were frowned upon, and even though they are now allowed he has chosen to keep his hair short, but he was among many who quietly campaigned for a better understanding of Rastafarian beliefs.

Holding his medals, Maryam, who is in her early 60s, holds back tears as she says: “I am really happy and proud of him that he has seen the changes he wanted to see. He has spoken out and carried it forward. I just wish my husband was here to see that.”

Danny adds: “It’s amazing to prove your family wrong in a positive sense, going back to my community and encourage them and say it [the military] is a place where we can achieve success and that we are welcome. We can all pull towards the same end. It’s something that is really powerful.”

Since he began leading the network in 2017 there has been a 150 percent increase in the number of Rastafarians – the religious and political movement which developed in Jamaica in the 1930s – in the military and dreadlocks are allowed.

“Now we have Rastas in the Royal Marines, in the RAF and the Navy and wearing dreadlocks, being proud of who they are, being integrated and serving our country,” he reveals.

Danny explains: “One of the main beliefs is that all people are equal and I believe that, too,” he says.

“When I joined, dreadlocks were not allowed.

“We wanted a standardised policy giving all Rastas rights to worship.

“I was the highest ranking Rasta in the Army at the time and I was elected chairman, which I still am.

“We had in excess of 30 at the first meeting at Tidworth Garrison [Wiltshire] but there are more than 200 members in the network now.” It is estimated that there are some 700 Rastas in all three services now with around 500 in the Army.

“Some don’t feel the need for additional support,” Danny says. “There isn’t a perception that they need to cut their hair. Rastas can wear turbans. We have the freedom to express our faith.”

The network provides mentoring and has proved highly popular as a way for like-minded service people to get together and share their views.

“The Army is keen to listen to its diversity to learn as much as it can to maximise everyone’s talents,” says Danny.

“I’m pleased my mother is proud of the work we do. My mum is a really strong woman.

“She instilled strong values in all of us, honesty and giving 110 percent.

“Anything less than that was a failure. Our family has always been strong and motivated.” His younger brother, Solomon, was the first black dancer to be accepted in the Royal Ballet and is now doing a masters degree in ballet production.

Danny excelled at being an adjutant in Plymouth, a non-combat, administrative role which involves making sure all Commandos are fully prepared for whatever is thrown at them while working closely with the commanding officer.

He’s now working as an instructor at Sandhurst military academy, where his communication skills and leadership qualities have been put to good use helping officer recruits.

If he wins promotion to Major in July as expected, he has set his sights on entering the bastion of military power, the Ministry of Defence.

New Royal Marine Commandos are recorded going through an array of exercises in all weathers, including a 30 mile yomp over rough terrain.

Two women have so far passed the course to win the honour of wearing the green beret, but others are following in their footsteps.

In the third episode, Donna, a chef for the Royal Marines, is shown working to win a place on the Commando course. She wants to swap the kitchen for the frontline, but the road she’s chosen is a tough one.

“If I can do this, I can do anything,” she insists. “It’s not easy, it’s scary and all eyes are on you. Hopefully I will be able to bring more people on.”

Filmmakers took her along to the Citadel to meet Jen, one of the two female Commandos.

Jen tells her: “When I was on the course I was convinced everyone was watching me when they’re really not.”

Donna is urged to let go of that self-induced pressure so she can fully enjoy the course.

If she’s looking for inspiration, she could do worse than look to Danny Cousland, a beacon for another type of equality.

• Commando: Britain’s Ocean Warriors is on BBC Two on Sunday nights at 8pm and available on catch-up via the BBC iPlayer